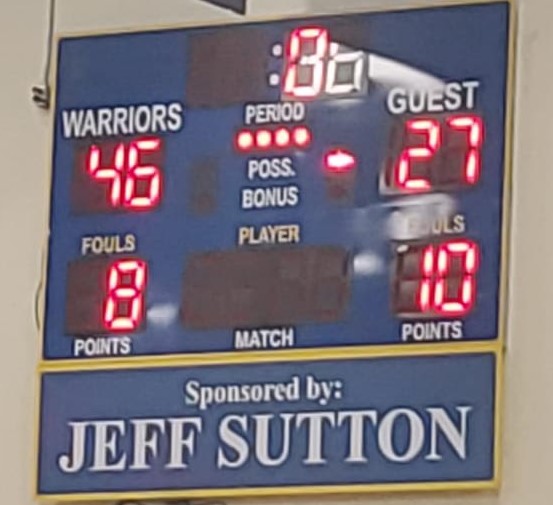 By Marvin A Azrak “It’s not how you start But how you finish.”

The famous line from Albert Pujos, didn’t ring more true than Wednesday night,   wherein between those walls(some of it padded) and in front of a robust and capacity crowd, the Magen David Yeshivah varsity basketball Warriors did battle with the Magen Avraham Kings in the first round of the playoffs.

Despite falling behind early and the game being tight throughout, the Warriors finished with a flourish en route to a 46-27 win, and secured a road date with the Ramaz Rams in the quarterfinal round.

Contrary to their 30 points regular-season loss, YMA embraced the hostile environment and attacked the Warriors’ infamous press and zone defense while stifling them defensively with their trademark toughness for an early 18-9 advantage. But a timely timeout by MDY coach Benny Mann lit a fire under the team,  mainly star senior Jack Cohen. He was a relic off the bench with his feisty competitiveness as the boys embraced the pressure instead of drowning in it and went on an inspired 10-0 spurt to end the half, perking up the previously apprehensive fans.

In the third, the defensive intensity of postseason games aggrandized, and the offensive production came to a standstill before the Kings completed a 5-1 clip for a 24-20 lead late in the third quarter. Once again, the Warriors looked exasperated and were being outmuscled in their gym at their own game, some of it attributed to the fact they were a bit shell-shocked considering they breezed through this test in their last meeting. But as they’ve proven all season long, it’s “not how you start, but how you finish.” Over the final 10 minutes of this game, MDY released their will, adrenaline, skill, and teamwork that exemplified the hearts of true Warriors, who eventually became champions of the evening, and dethroned the King atop the scoreboard.

Allie Dweck knocked down a jumper before a steal allowed them to move in transition, where ultimately, Asher Melamed got the hoop and harm for a 25-24 Magen David lead. After forcing another turnover, the Warriors milked the clock, but due to great reads by the YMA defense, they couldn’t get anything going. In front of his longtime basketball coach and father “Spike” watching in the stands, Allie Dweck swished a 30-footer from straightaway, thrusting his arms skyward and sending the elated crowd into an uproar, which included  the students’ Rabbis, administrators, and principals.

That captivating dagger by the captain wasn’t just a shot that gave his team breathing room, but a statement across the way to the Kings, that “This is our house and our season, and we’re not letting you take it.”

“That’s what captains do,” said coach Benn Mann said of his star, “He leads by example and can come through when his team needs it the most, and with ice in his veins, that’s  what he did there.”

“Allie’s a special player and proved why he’s our leader out there on the floor,” said assistant coach Morris Zarif, “It was a big-time shot and gave way towards the fourth where we made those quick adjustments and put a YMA team that came ready for a fight, away.” “We play for these moments, and I’m just happy I was able to help the team in that situation,” said Allie when he was asked about the shot.

YMA had a great run, going 7-7 despite not having much depth on their bench and reaching the postseason, but when push came to shove in the fourth, they were reeling and smelling blood along with the externalities in their favor; Magen went in for the knockout blow.

It was 28-27 with five minutes left before MDY would never let their opponent score once more. The last 300 seconds of action would provide a clinical display of the “Warrior way” of basketball, as through exquisite execution in all aspects that the beautiful game of basketball presents(Coaching, defense, and offense),  especially rebounding, free throws, and perimeter play; Magen David closed out YMA with an 18-0 run highlighted by star Asher Melamed and seniors Allie Dweck and Jack Cohen as the trio sent the boisterous home fans happy one last time with a resounding 46-27 victory.

The win capped off what has been a gratifyingly momentous week for the institution, which welcomed new head of school  DR Daniel Vitow and new rabbinical leader  Rabbi Eli J.  Mansour. We wish them the best of luck and success in their new endeavors.

As for the team, the Warriors will travel to Ramaz to battle the overall three-seeded Rams(12-2) in Manhattan when round two arises. In addition to that, MDY was also officially invited to the Sarachek tournament, the equivalent of “March Madness” in Yeshivah basketball, as the top 20 teams from all over the country will compete to decide who’s the best in the world in late March.

“It’s an honor to be there, but the job’s not finished here,” coach Zarif said. “We’ve BH had a great start to our brand new season, but as the saying goes, it’s not how you start; it’s how you finish.”