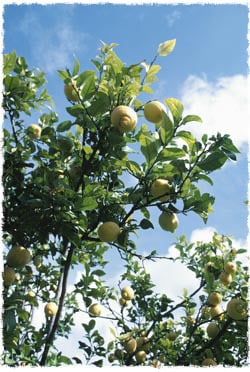 By Moshe Bogomilsky(Chabad.org) Question: Why is it necessary for us to know the date of the New Year for trees?

Answer: The Hebrew calendar is set up according to a seven-year cycle, and the seventh year is known as the Shemittah year. During this year the land is left idle, and no work is done in the fields. In the first, second, fourth and fifth years of the seven-year cycle, the farmers have to set aside maaser rishon (first tithe) for the Levi, and maaser sheni (second tithe) is brought to Jerusalem to be eaten. In the third and sixth years, maaser ani is given to the poor people in lieu of maaser sheni.

Maaser must be given from the fruits which grow on the tree each year. One cannot give from produce of the current year for another year. For purposes of maaser from trees, the new year is calculated from the time when the fruits of the trees begin to blossom. Tu B’Shevat is the cutoff date between one year and the next. In the year which follows Shemittah, fruits which blossomed before Tu B’Shevat belong to the first year of the cycle, and fruits which blossom after Tu B’Shevat belong to the second year of the cycle.

Question: What is the basis of their dispute?

According to the Jerusalem Talmud (Rosh Hashanah 1:2), the significance of the New Year for trees is that until then all trees live on the water of the previous year. After this date, the trees derive their life source from the water of the new year. Thus, the effect of the new water occurs four months after the period of judgment.

However, according to Beit Hillel, priority is given to that which is actual. Thus, the actual decision on water takes place on the fifteenth of Tishrei. Therefore, four months later, on the fifteenth of Shevat, the trees start living from the new waters.

Question: The Torah states, “ki ha’adam eitz hasadeh”—“Man is like the tree of the field” (Devarim 20:19). The Jewish people have often been compared to different trees. What lessons can man learn from trees?

Answer: Trees teach us the following:

1) A tree is planted by first putting a seed in the ground. Afterwards, it is necessary to frequently water the ground and remove the weeds. In each and every Jew, Hashem planted a divine seed—his soul. It is man’s obligation to water it with Torah study, and protect it by weeding out bad friends and influences.

2) A healthy tree continues to grow and grow. A healthy Jew must continuously grow spiritually. This is accomplished through studying Torah and performing mitzvot.

4) The strength of the tree depends on how well it is rooted in the ground. The root of the Jew is his emunah.

5) The beauty of a tree is the fruit it produces. Mitzvot and maasim tovim—good deeds—are man’s fruits.

Answer: The Torah commands that on the Yom Tov of Sukkot we take a peri eitz hadar—“a beautiful fruit of a tree” (Vayikra 23:40). Our sages say that this refers to the etrog—the citron. People spend lavishly to purchase a beautiful etrog in order to fulfill the mitzvah in an exceptional way. The Mishnah tells us that Tu B’Shevat is the New Year for the tree, and by using a singular term it informs us that we should pray particularly la’ilan—“for the tree”—namely the etrog tree, which is very important to us. On this day, one should beseech Hashem that He grant us a beautiful etrog with which to perform the Torah’s commandment.

[On Tu B’Shevat,] Ashkenazi Jews are accustomed to eat many different fruits from trees.” (Magen Avraham 131:16)

Question: When one eats new fruits which one did not eat throughout the year, one makes a berachah shehechiyanu. Should it be recited before the berachah of borei pri ha’eitz, or after?