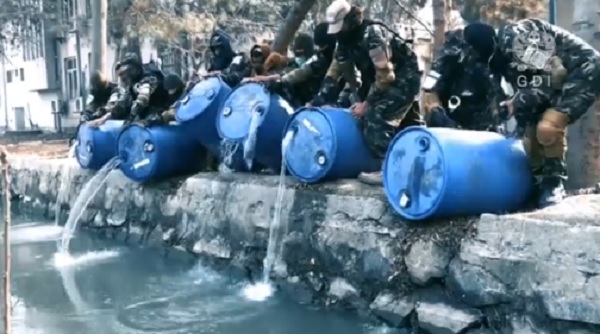 US officials say Israel behind bombing of Iranian drone factory

By Bob Unruh(WND NEWSCENTER) The radical elements in Taliban, which took over Afghanistan in just a matter of days after Joe Biden abruptly pulled American military forces out, leaving behind both Americans and billions of dollars in war machinery, now have raised the level of enforcement of Shariah, the punitive Islamic religious law.

By dumping hundreds of gallons of liquor into a canal in Kabul.

The comments come from Robert Spencer at JihadWatch, who explained the Quran calls “intoxicants” “defilement from the work of Satan.”

Muhammad said, in the hadiths, that “wine is cursed from ten angles.”

“Remember: if you suggest that some aspects of Shariah may be incompatible with Western society and law, you’re a racist, bigoted ‘Islamophobe,’” Spencer explained,

AFP had revealed Afghan “intelligence agents” were documented on video pouring “around 3,000 liters of liquor into a canal in Kabul.”

“Video footage released by the General Directorate of Intelligence (GDI) showed its agents pouring alcohol stored in barrels into the canal after seizing it during a raid in the capital,” the report said.

An official online said, “Muslims have to seriously abstain from making and delivering alcohol.”

The report noted it was unclear when the raid happened, or when the alcohol was destroyed, but apparently the operation involved the arrests of several suspects.

AFP noted, “Selling and consuming alcohol was banned even under the previous Western-backed regime, but the Taliban, known for their austere brand of Islam, are stricter in their opposition to it.”

The Taliban stunned the rest of the world with its quick takeover of Afghanistan as soon as Biden’s pullout was implemented.

Since then, it has confirmed the resumption of executions for offenses to Islam, and it has banned foreign currencies, declared the region to be a caliphate, confiscated girls to use as sex slaves, assembled a “kill list” of LGBT Afghans, handed over land and money to jihadists who killed U.S. soldiers, withdrawn rights for women, and even banned barbers from trimming men’s beards.