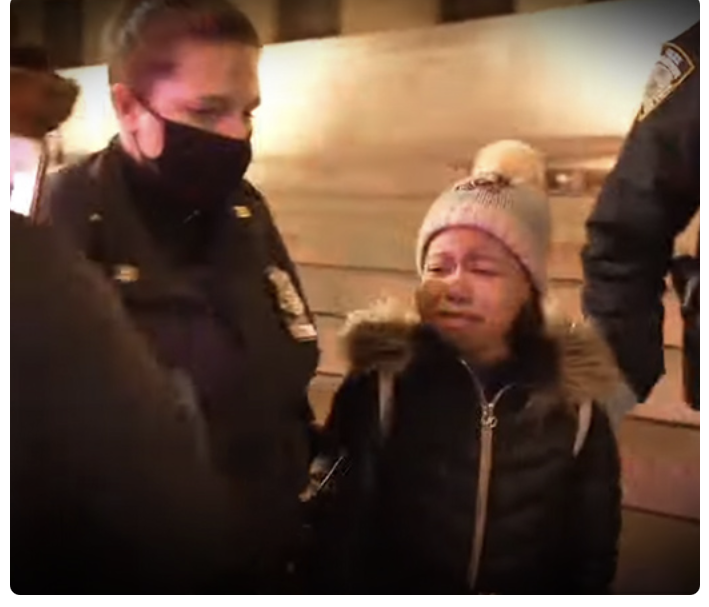 UPDATE: according to the NYPD the 9 year old girl was not arrested

Despite securing a reservation at the museum, security refused to let the group inside without showing a vaccine passport.  After an argument museum security allegedly took the protestors to one room in the museum, held them there, and called the NYPD.

TJV News did not verify these details from the museum or the NYPD, this is an account from the protesters.

Quietly, with very little media coverage, peaceful groups who often bring their entire families have been partaking in sit-ins at various restaurants. The protestors will take a seat and try to order food without displaying their vaccine digital passports, or vaccine cards. It is believed most of the anti mandate protestors are unvaccinated, however, it has been reported that vaccinated New Yorkers have also shown solidarity with these groups and are partaking in the sit-ins.

Anti-Mandate protester speaks out at the Museum of Natural History…The activists made reservations at the museum but were stopped inside by security for not having Vax Papers. The front entrance has been closed so nobody else can enter. Police were also called… pic.twitter.com/6QcV2kBTla

These groups tend to be multiracial and often they bring along their young children to these peaceful protests.

Often the restaurants will refuse to serve the protestors without vaccine papers,  the groups will not leave and the venue will call the police. There have been multiple arrests at places ranging from Applebee’s, Cheesecake Factory, and Olive Garden.

These small grassroots protests began when former Mayor de Blasio started the vaccine regulations for indoor venues. When de Blasio banned unvaccinated children from restaurants and most indoor venues, the movement turned to an intense focus on this draconian and unscientific mandate.

A protest is scheduled at Washington DC, to oppose vaccine mandates for employment and for indoor venue admittance, especially against cities that are mandating children to get vaccinated.  “Defeat the Mandates: An American Homecoming” is a march and rally on January 23rd, and RFK JR is scheduled to speak, in addition to one of the most popular news commentators in America, podcaster Joe Rogan.

At the Museum of Natural History, one woman named Joy spoke her mind while demonstrating inside the building, saying, “We should be able to, as New York City residents access the amenities and the services that this city holds because I pay taxes.”

“I should be allowed to access this, but I’m not allowed to,” she added. “It’s Jim Crow all over again.”

Another protester, Mike, said he has been going to the museum since he was a child.

He continued, saying, “It’s hard to process being kept out, as someone who worked for museum security for nine years at the MET, it twists my mind into knots and my heart as well that we’re at this point in history.”

Eventually, NYPD officers arrived and arrested six demonstrators altogether, including a nine-year-old girl named Jayla who cried as police walked her to a squad car.

“You are traumatizing a little child,” protesters told the police. “This is child abuse!”

Independent media outlets based in NYC covered this sit-in and subsequent arrests.

#BREAKING : A skirmish breaks out between Anti-Mandate protesters and Museum Of Natural History security after a female activist on her period was being denied access to the bathroom.

The activists are demonstrating against vax passport requirements… pic.twitter.com/rot2K5mQat