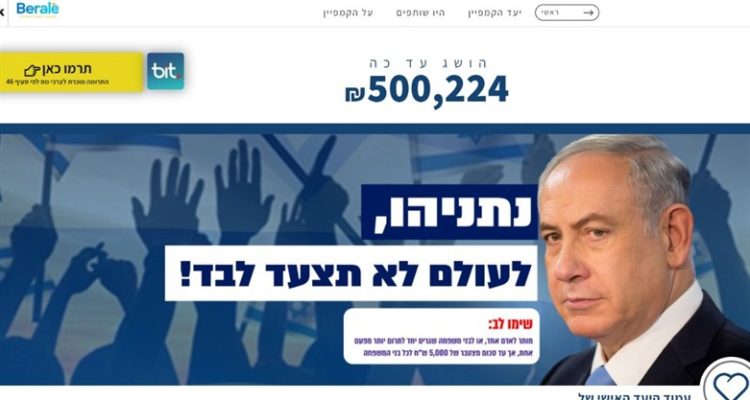 Smallest-Known Miniature Medieval Hebrew Manuscript to be Auctioned in Jerusalem

Turkey Pledges Support for Palestinians Despite Improved Ties with Jerusalem

A right-wing journalist and staunch defender of former prime minister Benjamin Netanyahu launched a crowdfunding campaign for his legal defense on Sunday, inviting members of the public to donate cash.

“Friends, here it is – a crowdfunding page to raise money to cover Netanyahu’s legal expenses. He is not alone – and this is the least we can do to show him that we’re there for him. I’ve made my donation,” Channel 14 reporter Yinon Magal announced on his social media accounts.

Within a few hours, the campaign raised close to two million dollars.

Magal, a veteran journalist who once served in the Knesset as part of current prime minister Naftali Bennett’s former political party, the Jewish Home, has been an outspoken advocate for Netanyahu.

He noted that he had not discussed the crowdfunding campaign with Netanyahu before the launch. “I didn’t ask him for his opinion,” the ex-Walla News editor wrote.

“I just figured that even for someone wealthy, expenses that can mount into the tens of millions are not easy to bear and could become a factor in deciding how to act. And as a person who believes that he is there fighting for me, too, it’s the least I could do.”

In September 2020, Magal was criticized for a particularly colorful description of the way he said Netanyahu should be managing what he referred to as incessant media persecution.

“If I were [Netanyahu], long ago I would have pulled out a submachine gun and shot — I don’t want to say at all of you, not you, but the rest of you — brrrrrr, bursts of bullets, like Rocky, like Rambo, with the ammo belt going down,” he told his co-host Ben Caspit during a broadcast on Radio 103 FM.

He added that journalists were busy “crucifying” Netanyahu, while ignoring other pressing matters in favor of mudslinging at the then-premier.

While some journalists decried Magal’s remarks as incitement to violence, he dismissed the criticism and said his statements were clearly satirical.