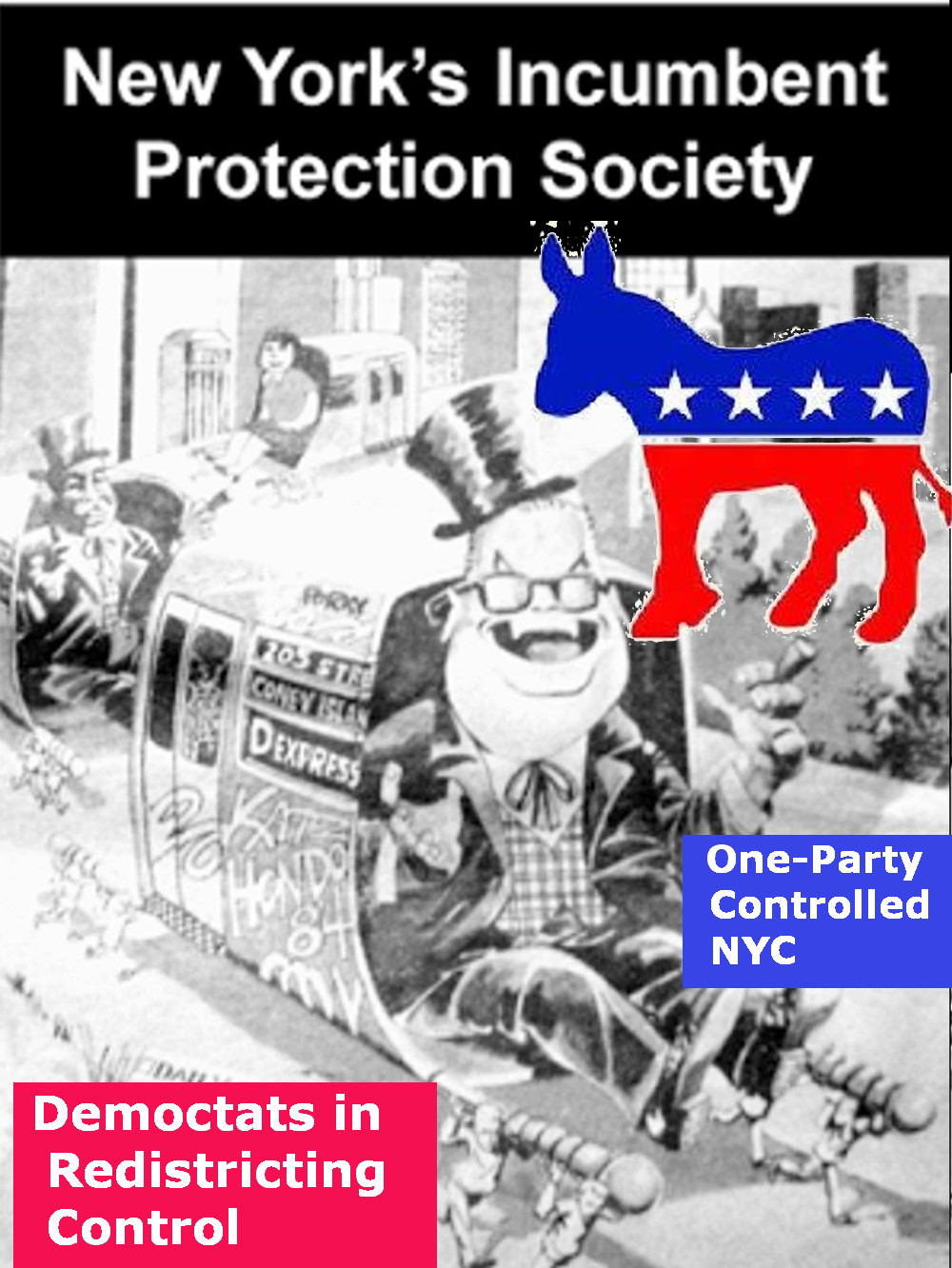 In Yet Another Sign of Inflation, Cocktail Prices Surge in NYC

Democrats on New York’s Independent Redistricting Commission washed their hands of the alleged bipartisan panel a day before it was to submit redrawn state and congressional boundaries to state lawmakers. The five Democratic members of the 10-person commission issued a statement Monday stating that Republicans on the panel have “refused to agree to a compromise” and negotiate the map proposals. The five Republicans on the commission counter charged that “the Democrat-appointed commissioners have no incentive to work cooperatively toward a consensus plan and, in fact, they purposely scuttled the process so that the determination of district lines would be tossed back to a legislature controlled by Democrat supermajorities.”  Given the current political environment in one-party New York, the only way Republicans could have any say in independent redistricting commission was through bipartisan negotiations and compromise with the Democrats on the commission, which did not happen.

With the independent commission failing, it in effect passed the baton to the Democratic-controlled State Legislature to draw the new district maps. Republicans are locked out of the reapportionment process, leaving a court challenge to declare the lines the democrats produce as unconstitutional, the only option NY Republicans have left to influence the redistricting process.

The Legislature now must act quickly to have a new redistricting map in place some time next month before petitioning for the Spring Primary gets underway on March 1. If the Republicans challenge the lines the legislature passes and governor signs, the June primaries will have to be delayed. A court challenge is easier now since the 2014 independent redistricting amendment that the legislature is ignoring, also makes it more difficult than in the past to create overly biased partisan gerrymandered districts

A federal court drew the congressional lines the last time around in 2012, after the Assembly and State Senate failed to break an impasse over new congressional lines. At that time, Republicans controlled New York’s Senate and the Democrats controlled the Assembly. Since Democrats control both houses now, this will be the first time in decades that the lines will be drawn by one party.

The Jewish Voice (JV) wrote two stories that the so-called Independent Redistricting Commission (IRC) would not reach an agreement on new state and federal redistricting lines. The JV articles include: The Kabuki Dance Redistricting Incumbent Protection One-Party NY Fix is In, and Albany Fools NY’s Voters Again, Independent Voting Commission Fails on Cue –  Politicians Again Draw Their Own District Lines.  predicted that the IRC would not agree on new district maps. The JV reported that new Congressional, Assembly and State Senate maps would be partisan gerrymandered, to limit the number of seats a Republican can win in the state.

More importantly, The Jewish Voice, warned that the level of competency of NY’s government would decrease and the level of corruption with would increase if one-party drawn the new district lines. The Founding Fathers set up a system of divided government to protect us from our own government, One-party redistricting in a one-party state allows elected officials with safe seats, to gain Orwellian type power over the voters. With the breakdown of NYC local media in the last 20-years, one-party power has increased dangerously, drowning out the voices of the citizens they govern.

A bipartisan commission was given the power by NYS voters in 2014 to draw new state and federal legislative districts, after every new 10-year census. The voters voted on an Independent Redirecting Commission Amendment that gave Albany the power to control the commission. Before the public voted the leaders of the Assembly, State Senate and Governor Cuomo conspired to control the appointments to the Commission, so they can draw favorable lines for their members, just like they did in the past.

In 2014, State Supreme Court Justice Patrick McGrath ruled that the commission “cannot be described as ‘independent’.” The judge ordered the Board of Elections to delete the word “independent” from the description of Proposal #1 that appeared on the 2014 ballot since the commission members would in fact be named by the State Legislature, which according to the amendment could also reject the commission’s redistricting recommendations.

The redistricting commission was only proposed after legislators and the governor received a lot of criticism for breaking their signed pledges to turn over the redistricting process to an independent panel in 2012. Legislators, governors, and every elected official, only care about one thing, getting reelected. So, the Albany gang did what they always do, they set up a Potemkin Commission, full of hidden loopholes from the voters, to draw favorable districts, to keep themselves in power.

State lawmakers Draw District Lines Meant to Leverage Those Already in Power or Party in Control – Allow Elected Officials, in Effect, to Choose Their Own Voters by Dividing Communities

One-party control is extremely dangerous to NYC democracy and economic health at this time of crisis. The big losers in the gerrymandering are the city’s neighborhoods, cut up into several districts, unable to put pressure on elected officials to address the community concerns, like lack of affordable housing or too many homeless occupying their streets.

“Partisan gerrymandering is an offense to democracy. It creates districts that are skewed and uncompetitive, denying voters the ability to elect representatives who fairly reflect their views” – NY Times. T

In states where elected officials draw their own district lines, corruption increases. The leaders in both the NY Assembly and State Senate went to jail along with dozens of others, since the last lines were drawn in Albany in 2012. Incumbent elected officials who draw favorable districts always win. In safe districts elected officials can ignore voters’ problems like crime, homelessness, affordable housing, keeping small businesses open and providing jobs for city residents, while easily getting reelected. One party redistricting to favor incumbents lessens the chances of candidates who more reflect community values to challenge office holders, leaving the challenge open to candidates with ideological beliefs, which explains the growth of the far-left in NYC.

Will Democratic Redistricting in NY Help Democrats to Stay in Control of the U.S. House Representatives?

While Republicans control redistricting across huge swaths of the country, New York is a rare place where Democrats wield extraordinary power over the redrawing of congressional lines. How the state carves out its congressional districts could decide control over the U.S. House. Even as the Empire State will see its representation in the House drop from 27 to 26 with one-party redistricting, Democrats could potentially gain seats in the New York congressional delegation.

The Democratic Party in Washington would like to see the NY legislature strip the GOP down to two or three seats. Democrats hold a 19-8 advantage in the state’s 27-member congressional delegation. A super PAC called No Surrender NY, which aims to preserve and expand Democratic representation, suggested the Legislature’s supermajority should use the opportunity to push back against the far right.

All the newspaper editorial boards, good government groups and so-called reform pols will be back after the new lines are drawn and accepted, will again spin to us on how bad the new lines are, and we must never allow it to happen again, like they did in 2012. Alongside them will be the heads of the Citizens Union that said vote yes for the 2014 constitution amendment creating the Independent Redistricting Commission. In 2014 the Citizen Union and League of Women Voters said: November 5, 2014 – “We are pleased that voters seized this once in a fifty-year opportunity to fix our state’s rigged redistricting process and end the practice of drawing districts to favor incumbents, protect majority party control, and discourage competition.”

The Good Government Groups and others who are watching and hiding during partisan drawing of NY’s district lines, should be demanding Term Limits for all of Albany’s elected gang, as a trade-off for the political 2022 redistricting. Right now, the only way to get them out of office is for them to die or go to jail. The NY Republican Party is incapable of functioning as a statewide or citywide party with a real platform. It is full of party insiders who are clueless, happy with the party position, or have other agendas. The GOP lacks the leadership to change how their dysfunctional party operates.