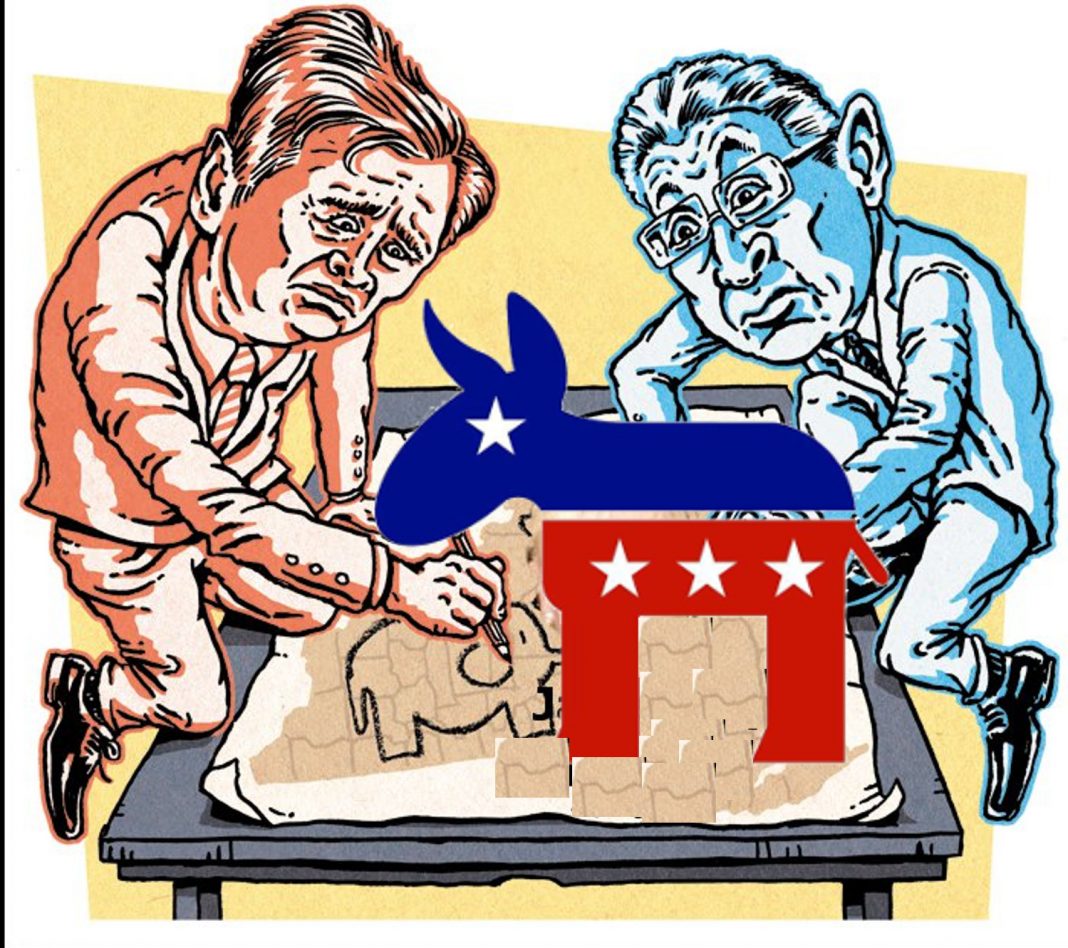 The Jewish Voice (JV) warned that the so-called Independent Redistricting Commission (IRC) would not reach an agreement on new state and federal redistricting lines. The JV article, The Kabuki Dance Redistricting Incumbent Protection One-Party NY Fix is In, predicted that the IRC would not agree on new district maps. The JV reported that new Congressional, Assembly and State Senate maps would be partisan gerrymandered, to limit the number of seats a Republican can win in the state.

More importantly, we warned that the level of competency of NY’s government would decrease and the level of corruption with one party drawn districts would increase. The Founding Fathers set up a system of divided government to protect us from our own government, one-party control hurts which works against the founder’s governing principal, hurting our democracy and the ability to meet the people’s needs. In one-party state elected officials gain Orwellian type power of the voters, drawing the maps is just one example. With the breakdown of NYC local media in the last 20-years one-party power has increased to dangerous levels.

After an acrimonious meeting and amid accusations of partisanship, the New York State Independent Commission voted recently to send two different sets of redistricting maps to the state legislature. The 10 commissioners voted along party lines, so no set of maps reached a majority. If the state legislature fails to approve a plan by a two-thirds majority in both chambers and a plan is vetoed by the governor, the commission will be able to present new maps. If those also fail, the legislature will draw the new district themselves. Democrats now enjoy supermajorities in both chambers of the Legislature, so any new lines drawn will heavily favor the democrats.

In 2014, State Supreme Court Justice Patrick McGrath ruled that the commission “cannot be described as ‘independent’.” The judge ordered the Board of Elections to delete the word “independent” from the description of Proposal #1 that appeared on the 2014 ballot since the commission members would in fact be named by the State Legislature, which according to the amendment could also reject the commission’s redistricting recommendations.

A bipartisan commission was given the power by NY votes in 2014 to draw new state and federal legislative districts, after every new census. The truth the voters voted on an Independent Redirecting Commission Amendment that gave Albany the power to control the commission. Before the public voted the leaders of the Assembly, State Senate and Governor Cuomo conspired to control the appointments to the Commission, so they can draw favorable lines for their members, just like they did in the past.

The redistricting commission was only proposed after legislators and the governor received a lot of criticism for breaking their signed pledges to turn over the redistricting process to an independent panel in 2012. Legislators, governors, and almost every elected official, only care about one thing, getting reelected. So the Albany gang did what they always do, they set up a Potemkin Commission, full of hidden loopholes from the public, to draw favorable districts, to keep themselves in power.

The NY Times wrote in an editorial on 10/28/14 that voters should defeat the Independent Redistricting Commission Amendment:

Proposal One is a constitutional amendment to revise the state’s redistricting procedure. This is a phony reform that purports to establish a new system of drawing legislative districts. Legislative leaders would appoint a committee charged with drawing new districts. If the legislators do not like the first two tries, they can draw the districts themselves. The net result would be to reinforce, not reform, a system that virtually guarantees job security for incumbents and discourages competition. Vote no on Proposal One. NY Times Oct. 28, 2014.

While the media and newspaper are reporting with one article on the gridlock on the redistricting commission, they are not offering analysis about the effects of one-party control. How it is extremely dangerous to NY democracy and economic health to have one-party in Albany drawing the elected officials’ district lines that will increase the party’s control in what is already a one-party state.

The Legislature’s Democratic majorities need near unanimity to override the commission, so it is clear each member of the party in control, will be able to draw his or her line, to cut out unfavorable voters. The only thing they have to concern themselves with for the next ten-years is to fend off any GOP court challenges to the democratic drawn lines, not facing reelection. The commission’s stalemate eases the way for the most pro-Democratic gerrymandering in the history of New York, putting some of the state’s 7 GOP congressional districts in danger of being cut up out of existence. “Partisan gerrymandering is an offense to democracy. It creates districts that are skewed and uncompetitive, denying voters the ability to elect representatives who fairly reflect their views” – NY Times. The big losers in the gerrymandering are the city’s neighborhoods, cut up into several districts, unable to put pressure on elected officials to address the community concerns, like lack of affordable housing or to many homeless occupying their streets.

In states where elected officials draw their own district lines corruption increases. The leaders in both the NY Assembly and State Senate went to jail along with dozens of others, since the last lines were drawn in Albany in 2012. Incumbent elected officials who draw favorable districts always win – they can ignore voters’ problems like crime, homelessness, affordable housing, keeping small businesses open and providing jobs for city residents, while easily getting reelected. One party redistricting to favor incumbents lessens the chances of candidates who reflect community values to challenge office holder, leaving the challenge open to candidates with ideological beliefs, which explains the growth of the far-.

The Media Has Not Seek Out the Lying Government Leader Conspiring to Deadlock the Redistricting Commission. . . While the Daily News Cryptically Stays in its One-Party Bubble

NY Daily News 1/4/21 “Republican-led legislatures in several states trying to gerrymander Democrats out of existence for control of the U.S. House of Representatives makes it harder for even fair-minded Democrats to resist doing the same thing where they are in charge.”

When the commission law was passed in 2014 each party controlled one-house in the legislature. Now that the Democrats are in control of both houses, they can control the district lines of all the state and federal district lines. Only the far-left liberals and Democratic Socialists of America legislators can if they side with the GOP, possibly block the two-thirds needed in both houses to pass the new district map line.

All the newspaper editorial boards, good government groups and so-called reform pols will be back after the new lines are drawn and accepted, will again spin to us on how bad the new lines are, and we must never allow it to happen again, like they did in 2012. Alongside them will be the heads of the Citizens Union that said vote yes for the 2014 constitution amendment creating the Independent Redistricting Commission. In 2014 the Citizen Union and League of Women Voters said: November 5, 2014 – “We are pleased that voters seized this once in a fifty-year opportunity to fix our state’s rigged redistricting process and end the practice of drawing districts to favor incumbents, protect majority party control, and discourage competition.”

The Good Government Groups and others who are watching and hiding during partisan drawing of NY’s district lines, should be demanding Term Limits for all of Albany’s elected gang, as a trade-off for the political 2022 redistricting. Right now the only way to get them out of office is for them to die or go to jail. The NY Republican Party is incapable of functioning as a statewide or citywide party with a real platform. It is full of party insiders who are clueless, happy with the party position, or have other agendas. The GOP lacks the leadership to change how their dysfunctional party operates.