We must not ignore Harvard’s descent into Israel-hatred

By Adam Kredo(Washington Free Beacon) An overwhelming number of diversity, equity, and inclusion officers at American universities, who are ostensibly hired to create a welcoming space on campus, use social media to bash Israel and Jews, according to a study.

Researchers reviewed the Twitter feeds of 741 diversity, equity, and inclusion (DEI) officials at 65 different U.S. universities to determine their attitudes on Israel and, for purposes of comparison, China. They found that DEI staff “tweeted, retweeted, or liked almost three times as many tweets about Israel as tweets about China.” Of the tweets in question, 96 percent were critical of Israel, and 62 percent of the China-centered tweets were favorable. “The overwhelming pattern is that DEI staff at universities pay a disproportionately high amount of attention to Israel and nearly always attack Israel,” the study concludes.

The study, Inclusion Delusion: The Antisemitism of Diversity, Equity, and Inclusion Staff at Universities, was released this week by the Heritage Foundation, a Washington-based think tank, and provides one of the first evidence-based looks into the anti-Israel attitudes of campus diversity, equity, and inclusion officials. The average U.S. college employs 45 DEI officials, and that number is growing as schools seek to combat hatred on campus.

Jay Greene, one of the study’s authors, told the Washington Free Beacon that his findings indicate that DEI staff are acting as political activists, rather than combating bias and creating a safe space for all college students as their job dictates. “We have documented, established the fact, that DEI staff are overwhelmingly hostile to Israel in a way that clearly shows anti-Semitic motivations,” Greene said.

The findings come as anti-Semitic attacks on students have skyrocketed in recent years, putting the pro-Israel community on edge. There were at least 244 documented anti-Semitic incidents during the 2020-2021 school year, compared with 181 during the previous year.

After compiling the Twitter feeds of the 741 DEI officials, researchers found 605 tweets that bash Israel and just 28 that praise the Jewish state. 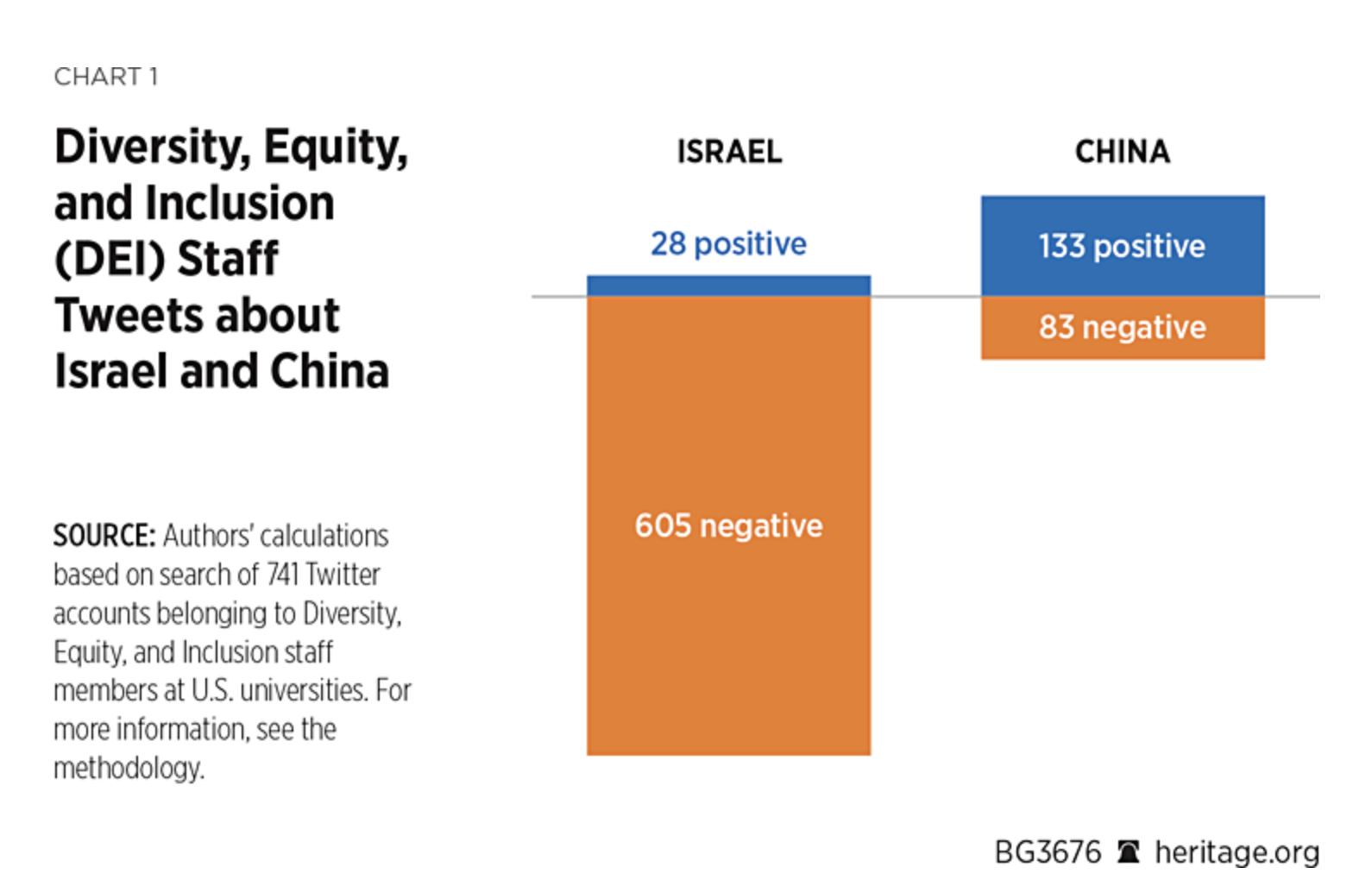 In one case, a Multicultural Student Center staffer wrote, “Condemn the Apartheid State of Israel for their Human Rights Violations against the Palestinian.” One tweet from an assistant director of an Office for Institutional Equity and Diversity said, “No apology for a pro apartheid Zionist organization holding a reception? I guess there’s no justice for Queer Palestinians here.”

The report withholds the identities of these individuals but quotes a litany of similar tweets that bash Israel and employ anti-Semitic language. Jews, in many cases, are accused of committing “genocide” and “ethnic cleansing” against the Palestinians. One DEI official working for Graduate School Diversity Programs liked a tweet that stated, “Y’all love to add the word liberal in front of the most evil things and it’s unhingedddd. Wtf is a liberal Zionist? What’s next? Liberal Nazi? Liberal colonizer? Liberal murderer? Liberal imperialist? Liberal fascist?”

Greene—who authored the report along with James D. Paul, research director at the Educational Freedom Institute—said the hostility toward Israel and Jews is a product of a radical liberal ideology in which all issues are viewed through the lens of “oppressor and oppressed.”

Greene and his coauthor recommend that American universities undertake a wholesale reevaluation of DEI staff given the data that indicate these school officials are not living up to their job requirements.

“Truly achieving diversity, especially ideological diversity, and helping all students feel included requires a dramatic change in how universities approach DEI. Existing staff need to be dramatically reduced, and the remaining DEI infrastructure needs to be reoriented toward serving the true purposes of diversity and inclusion,” the study concludes.