By Israel Kasnett ( JNS) With thousands of people expected to attend Hanukkah events in the United Arab Emirates this year, the Jewish Council of the Emirates (JCE)—a network of Jewish communal leaders who are building and growing Jewish life in the UAE—realized there was a need to create many holiday programs so that all age groups could enjoy the festivities.

Last December, it was estimated that 70,000 Israelis visited the UAE, and the Jewish community expects to host nearly that number of Jewish and Israeli tourists this year.

Yehuda Sarna, chief rabbi of the JCE, told JNS: “The volume of Hanukkah events taking place in the UAE this year speaks to the tremendous growth we have seen over the past year and … has led to organizations outside of the UAE traveling here to hold their Hanukkah celebrations.”

Sarna noted that Emiratis even joined the JCE in its celebrations, whether it was participating in the candle-lighting at the Expo 2020 Dubai or at an event held by the Association of Gulf Jewish Communities (AGJC), the umbrella organization for the Jewish communities of the Gulf Cooperation Council countries. 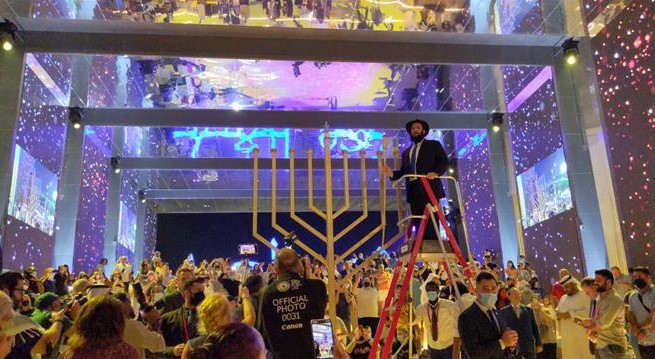 Participants at Hanukkah events hail from all over the world, including Bahrain, Canada, Israel, Europe, Kuwait, Oman, Qatar, Saudi Arabia, South America, the United Kingdom and the United States. Many Emiratis, including government officials, are participating as well.

Various Jewish organizations have chosen to travel to the city of Dubai to hold their events, including the AGJC, UJA-Federation of New York, the Jewish Agency for Israel, Chabad-Lubavitch and others. At the same time, a plethora of Hanukkah events has been planned to take place in different country’s pavilions at the Expo through March.

Elie Abadie, senior rabbi of the JCE, told JNS, “As with many of the holidays which we’ve celebrated here over the past year-and-a-half, our Emirati friends and neighbors have participated with us. They’ve joined us for Passover, Rosh Hashanah, Sukkot, and now, for the second time, they’ve celebrated Hanukkah with us.”

“Some have remarked that it was their first latke—and that they very much enjoyed it!” he noted.

“This is another example of the blossoming of Jewish life in the UAE that [demonstrates] there is a need for a multitude of programs to host everyone, as compared to the handful of planned programs,” he said.

To join the Jewish community in Dubai for Shabbat or Hanukkah programs, see : https://shaareimizrah.ae/.