By John Binder A total of 60 United States police officers have been shot and killed in the line of duty since the beginning of the year, new data reveals, following anti-law enforcement riots and the start of the “Defund the Police” movement in 2020.

According to records from the National Fraternal Order of Police (FOP) and the Officer Down Memorial Page (ODMP), 60 police officers across 45 U.S. states and territories have been killed in gunfire from January 1 to December 3 — a nearly 28 percent increase in fatal shootings of officers compared to all of 2020 when 47 officers were shot and killed.

As of November 30, FOP records state that 314 police officers have been shot since the beginning of the year. One hundred and nineteen of those shootings occurred in the midst of 95 separate ambush-style attacks on officers, resulting in 28 of the total gunfire deaths.

Ambush attacks on officers have increased nearly 130 percent since 2020.

According to ODMP data, three police officers have been killed in the first four days of December. Madison “Skip” Nicholson, a reserve police deputy, was killed in gunfire in Wilcox County, Alabama on December 1. 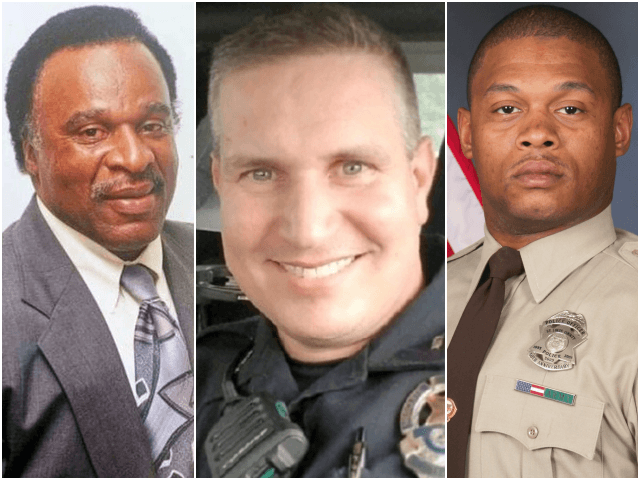 Officers Madison “Skip” Nicholson, Richard Houston, II, and Antonio Valentine were killed in the line of duty in the first four days of December of 2021. (Photos via ODMP)

The increase in shootings and killings of police officers this year comes after 2020 was marked with a string of anti-law enforcement riots and the start of the “Defund the Police” movement as a result of the death of George Floyd.

Bail reform measures, where cash bail has been abolished in favor of immediate jail release for suspects charged in crimes, across New York, California, and Illinois have dramatically increased the number of repeat violent criminals who are back on the streets within hours of committing crimes.

In Illinois, Gov. J.B. Pritzker (D) signed legislation this year that bans police officers from using deadly force against suspects committing property crimes and bans cash bail across the state by January 2023, among other things.