‘Listen to the Lights’: Chabad to Bring Chanukah Joy and Meaning to Millions - The Jewish Voice

‘Listen to the Lights’: Chabad to Bring Chanukah Joy and Meaning to Millions

By Mendel Super(Chabad.org) Kim Barlow lives in Malanda, Queensland, a town of 1,985 people in remote northern Australia. Born to a Jewish mother and Indigenous father, she never felt that she completely fit in either world. When she traveled to nearby Cairns during Chanukah of last year, she was drawn to the flames of Chabad-Lubavitch of Northern Queensland’s boomerang menorah. Finally, she felt her identity was embraced.

Seven-thousand miles away and a world apart, Rabbi Zalman Tiechtel, co-director of the Chabad Center for Jewish Life at Kansas University in Lawrence, Kansas, got a knock on his door in mid-November. A fellow introduced himself as Charlie Allen, telling the rabbi that he’d recently moved from Alabama, and noticed the menorah outside the Chabad center as he drove by. After putting on tefillin with the rabbi, he took his own menorah kit to celebrate the upcoming holiday.

The mystical tug of the flickering Chanukah candles is what the Rebbe—Rabbi Menachem M. Schneerson, of righteous memory—saw would draw Jews of all backgrounds to further embrace their heritage. “We should listen attentively to what the Chanukah Lights are telling us,” the Rebbe wrote in a 1982 public letter, noting that “the mitzvah of the Chanukah lights symbolizes—in a tangible and visible way—all the mitzvot of the Torah … .”

In remote Queensland, Barlow began traveling to Cairns—her nearest Chabad center—to celebrate Shabbat and Jewish holidays, bringing her family along. “I’d found a warm, welcoming Jewish community to be a part of,” she told Chabad.org. Seeing her Indigenous culture represented in a menorah “was really special.”

Meanwhile, in Kansas, after Allen left the Chabad center, he called the rabbi and asked him to send him the Shema prayer. “It’s been so long since I’ve done this, I felt a yearning to connect again,” he told Tiechtel. 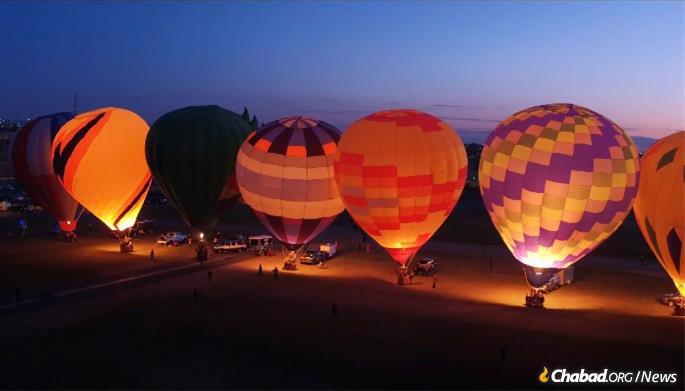 Looming 70 feet up, Chabad of New Mexico will fire up nine hot air balloons on the eighth day of Chanukah.

‘The Effect of the Light’

The Rebbe first set the Chanukah campaign in motion in 1973, encouraging one and all to share the light of Chanukah with their families and everyone around them. Ever since, and with the Rebbe’s constant guidance and encouragement, Chabad-Lubavitch emissaries worldwide have worked to find big and creative ways to share the Festival of Lights with their fellow Jews and its universal message of light over darkness with humanity at large.

The eight-day holiday—which begins this year Sunday evening, Nov. 28, and continues through Monday, Dec. 6—commemorates the victory of a small band of Jews over the Syrian-Greek army, who were bent on forcing the Jewish people to embrace Hellenist culture and reject G‑d and His commandments. Against all odds, the faithful but poorly armed band of Jews, led by Judah the Maccabee, drove them out of the land of Israel and reclaimed the Holy Temple in Jerusalem, which the Syrian-Greeks had desecrated.

When they sought to light the Temple’s menorah (the seven-branched candelabrum), they found only a single cruse of olive oil that had escaped contamination by the Greeks. Miraculously, they lit the menorah, and the one-day supply of oil lasted for eight days until new oil could be prepared under conditions of ritual purity. The miracles of the menorah and the incredible Jewish victory over the militarily superior Syrian-Greek army have been celebrated ever since. 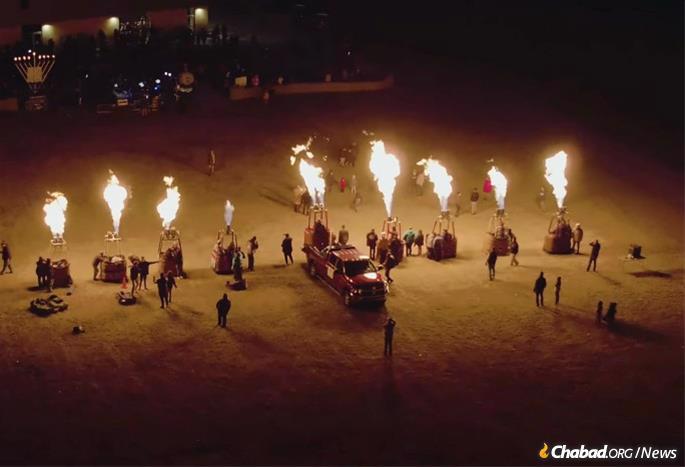 In past years with inclement weather, the crew fired up the propane burners above the wicker baskets without the balloons attached, resulting in a fiery, flaming spectacle.

Chanukah 2021 will see Chabad emissaries on six continents and more than 100 countries bring the light and spirit of the holiday to the masses. Chabad will reach 8 million Jews this year, with more than 15,000 large public menorahs erected in a wide variety of public spaces. More than 6,500 menorah-topped cars will hit the streets around the globe, while an estimated 10 million unique visitors will use the practical how-to guides and discover the many layers of meaning at Chabad.org’s popular Hanukkah.org.

“There is a preeminence in the [mitzvot] connected with lighting candles … in that the effect of the action, the appearance of light, is immediately visible … ,” the Rebbe explained in his public letter for Chanukah 1973. “[T]he mitzvah of kindling the Chanukah light is unique in that it is required to be displayed to the outside … . Thus, every by-passer, including non-Jews, immediately notices the effect of the light, which illuminates the outside and the environment.” 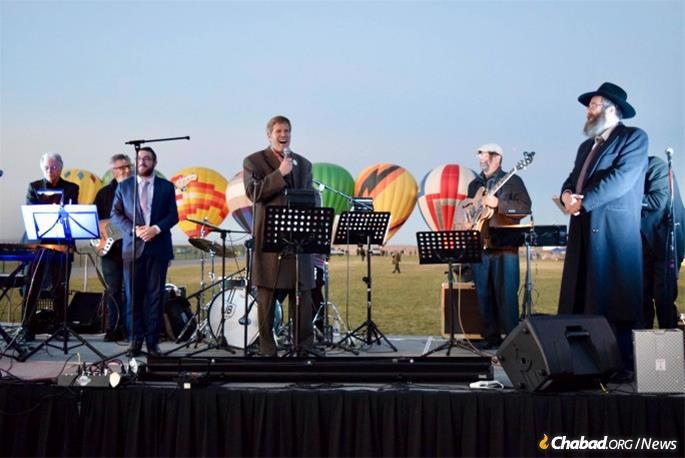 A concert will be held in Albuquerque again this year, with the spectacular hot air balloon menorah backdrop.

The Rebbe called not only for every Jewish home to be filled with the light of the menorah, but that its flames illuminate the wider world as well. For Chanukah in 1974, a Chabad emissary erected the very first public menorah outside of Independence Hall in Philadelphia, followed the next year by a grand 25-foot mahogany menorah raised in Union Square, San Francisco. By the end of the decade, Chabad emissaries were placing public menorahs on Fifth Avenue in New York City, outside the White House in Washington, D.C., and on the star-studded streets of Los Angeles, adding more cities every year. At the same time, Chabad activists hit the streets to distribute tin menorah and candle kits, giving them out as fast as they could manufacture them. These efforts, along with innovative programs, from Chanukah on Ice to olive-oil press workshops, permanently transformed the breadth and depth of Chanukah observance in the United States and around the world.

Creative thinking and adapting has been a key element in the way the Rebbe and his emissaries brought Chanukah to the forefront of Jewish life. Giving the menorah-lighting a local flavor has helped make Chabad’s events into annual community staples.

Like Rubin’s boomerang-themed menorah in Northern Queensland, Rabbi Chaim and Devorah Schmukler, co-directors of Chabad of New Mexico, in Albuquerque, have taken advantage of the Albuquerque International Balloon Fiesta held in October to inspire their grand menorah-lighting. Fifty-five feet across and looming 70 feet up, Chabad of New Mexico will have nine balloons fired up, casting a beautiful glow over the mountainous backdrop. The Chanukah celebration will take place on the eighth night, with one balloon serving as the shamash, or “helper” candle. The annual event regularly draws crowds of more than 700, with people coming from far beyond Albuquerque. “We once had a bus come from Mexico,” Schmukler recalls. The lively celebration includes a concert, buffet and children’s activities.

The eye-catching display of color lighting up the night sky is at the mercy of the weather, he notes. If the winds aren’t right, the balloons cannot be fired up. But the crowds won’t go disappointed. When inclement weather struck in past years, the crew fired up the propane burners above the wicker baskets without the balloons attached, resulting in a fiery, flaming spectacle.