(AP) — Visitors to the latest chic hotel to open in New York’s theater district can easily walk to any Broadway show — or they can stay inside and celebrate them.

The Civilian — a 203-room hotel with bars, lounges and a bistro — is packed with hundreds of pieces of Broadway art, including sketches, set models, costume pieces, photographs and artifacts that show theater past and present. 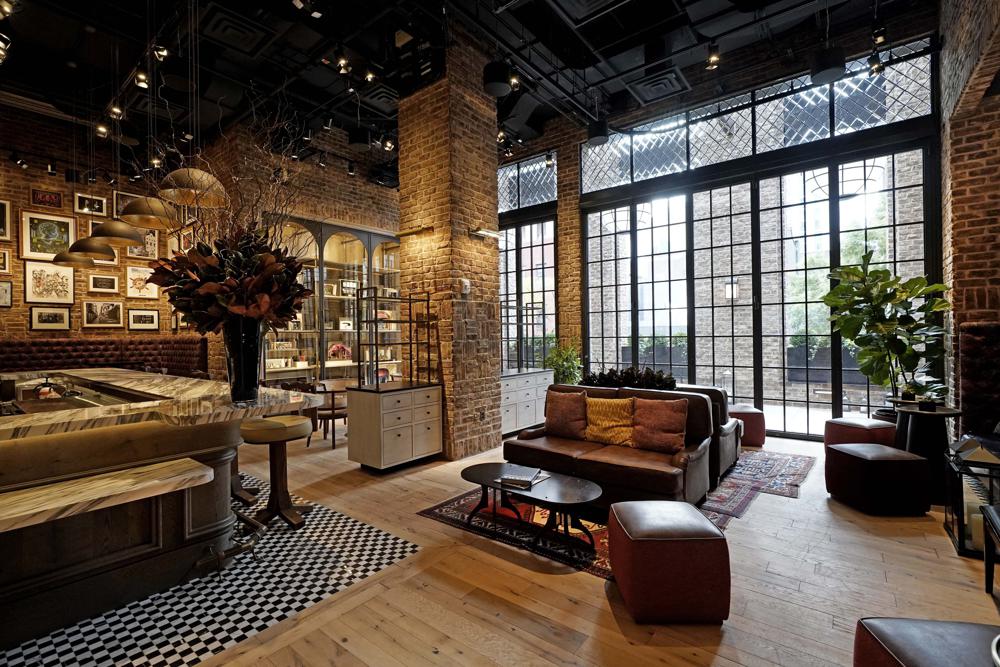 “I think people don’t realize that this neighborhood is just like a walking history of so much,” said award-winning architect and theater designer David Rockwell during a tour of the hotel he helped craft. “So I think it deserves to have a place that’s dedicated to that.”

The 27-story building — at 305 W. 48th Street, between 8th and 9th avenues — is from Sixty Collective hotelier Jason Pomeranc, who says the goal is to immerse visitors in a theatrical experience. The Civilian opens Nov. 24.

Nearly every inch of the Civilian has been designed with a theatrical flourish, from the marquee-inspired lighting, dramatic curtains, stage-like elements to the raw industrial materials of backstage life.

On display are set models of shows — like “Hadestown” designed by Rachel Hauck and “Slave Play” by Clint Ramos — and sketches from “Chicago” designed by William Ivy Long. The hotel plans to cycle new items in every year or so.

Wallcoverings throughout the guestroom floors and elevators are taken from abstracted details from costume designs by Isabel and Ruben Toledo (“After Midnight”) and William Ivey Long (“Beetlejuice” and “Hairspray”). Creators hope this is a chance for the talent offstage to shine.

“I’m always amazed when I work on a project and there’s a moment in the show when you realize 25 people touch that moment to make it work. So, in some ways, this is a chance to be exposed to all of those different people,” said Rockwell. 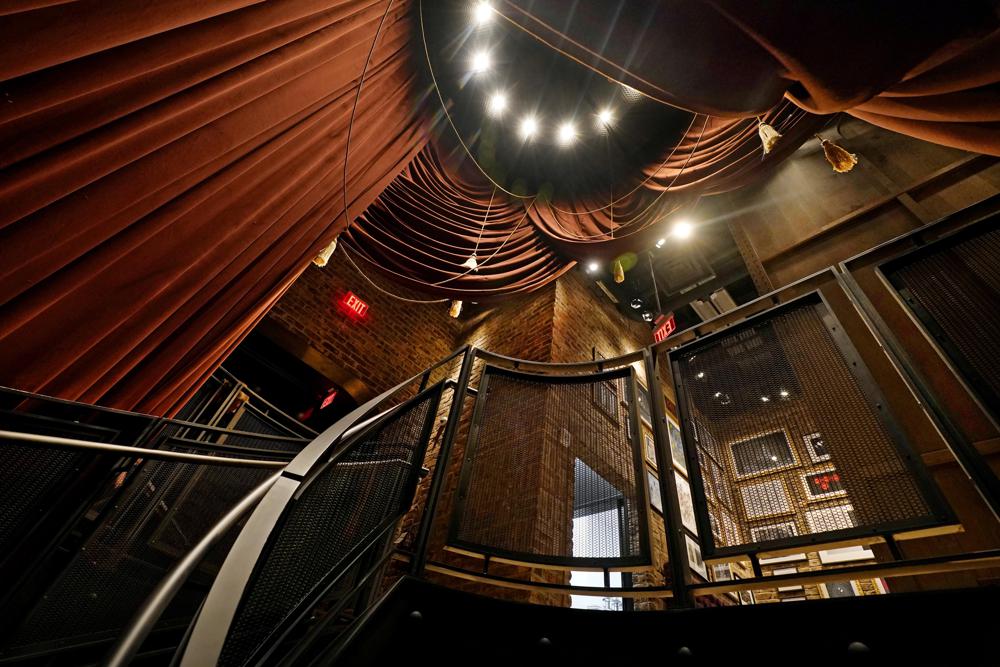 One wall area displays art from 20 artists and students who offered works inspired by a quote — “It’s a city of strangers/Some come to work/Some to play” — from the musical “Company.” A piano — lent by Rockwell himself — will become the focus of impromptu performances, the hotel’s creators hope.

There’s also a private library finished in royal blue hues and marquee lightbulbs where visitors can find replica guns and a crown from “Hamilton,” the original set model for “Company” as well red boots from “Kinky Boots” and a pink shrug from “Cabaret.” “This really feels like a dressing room,” says Rockwell.

On the beds are pillows with abstracted patterns by costume designers Jeff Mahshie and David Zinn. Luggage fits under the bed, and bathrooms with glazed porcelain sinks have heated floors.

“Even though the rooms are more petite than what we’ve done in the past, I don’t believe that the guest should have to sacrifice anything on a visual or textual experience, whether it’s the rich velvets from the fabrics or the tile in the bathroom or the quality of sheets and linens and pillows,” says Pomeranc. “The quality level should not diminish because of the room size.” 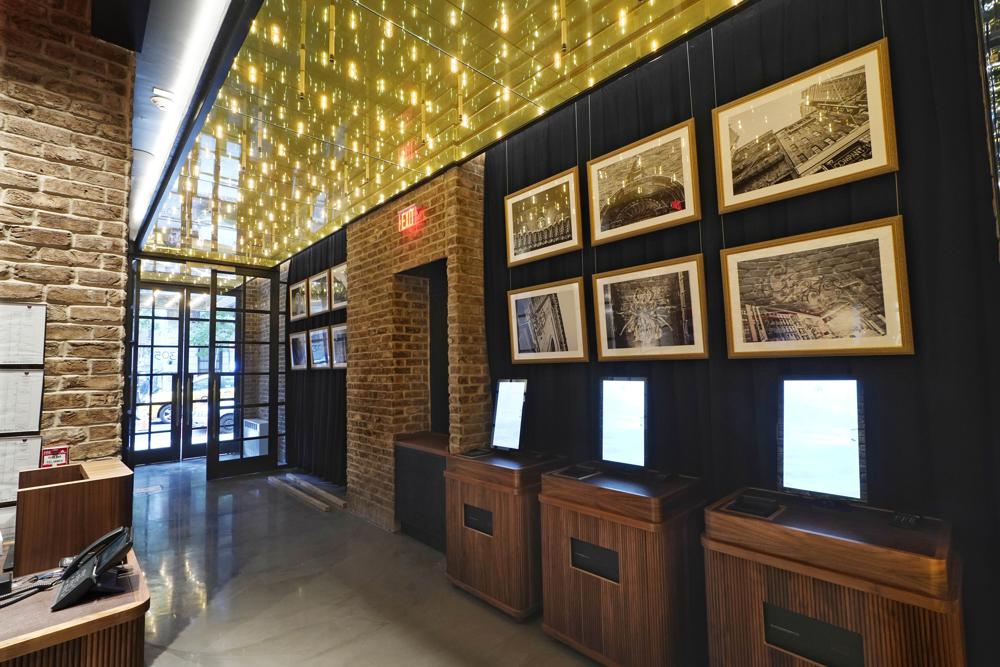 Visitors enter through a lobby that feels like a stage door and into a vestibule with an abstract interpretation of marquee lighting imbedded into the ceiling. A bank of theater seats rescued from an upstate theater sit along a brick wall and visitors climb a set of metal spiral stairs past a curtain to the second-floor bar, lounge and library.

“Does it feel like you’re stepping into kind of the fly loft you always wanted to get in?” asks Rockwell and, to be sure, there’s a strong “The Phantom of the Opera” feel.

There are photos throughout, starting in the lobby with black-and-white photos by Little Fang, the husband-and-wife team known for their opening-night portraits. Each floor will have framed art in the hallways clustered around a theme. The fourth floor, for example, is dedicated to rehearsal shots, with photos of Michael Bennett at “Dreamgirls” and the cast of “Miss Saigon.” 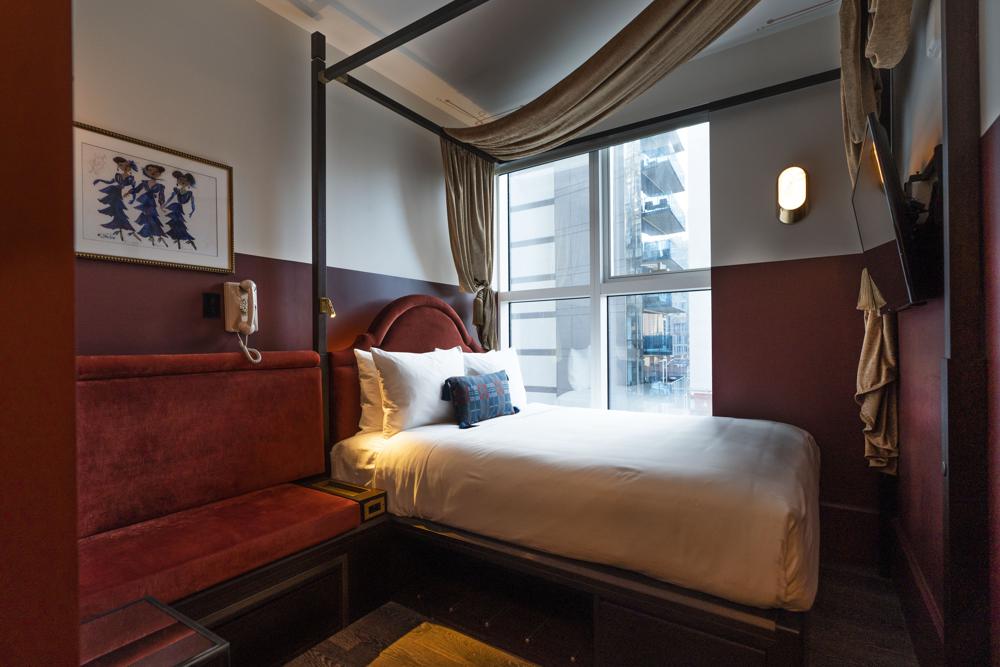 In the restaurant are 41 round, custom sconces featuring sketches of the Broadway theaters by set designers including Derek McLane, Es Devlin, Scott Pask, Tony Walton, Mimi Lien and Rockwell. A roof deck to open in the spring will have an enclosed lounge and bar.

Pomeranc hopes to create a series of different types of public space experiences, from turning the lounge from a place where people can work and communicate during the day to a music-filled space in the evening to relax. “It really speaks to the journey of the guest that’s looking for an authentically New York experience,” he said.

Partial proceeds from the Civilian will be donated to the American Theatre Wing, which also has supplied the hotel with images from its photo archives. Wing President and CEO Heather Hitchens says a watering hole for the theater community is deeply needed.

“A place for theater people to gather that also showcases and celebrates the work of those who don’t always get the attention they deserve is a welcome addition,” she says.