BY  DAVID ISAAC (JNS) It was as remarkable as it was unexpected. More than 300 Iraqis, both Sunnis and Shi’ites, gathered at a conference in a hotel ballroom on Sept. 24 in the Iraqi Kurdish city of Erbil to demand their country join the Abraham Accords and forge ties with the Jewish state.

Still more surprising, the participants weren’t Kurds, as might be expected, given that the conference took place in the capital of Kurdistan and Kurds have a long history of cooperation with Israel. Instead, the participants came from six Iraqi governorates: Baghdad, Mosul, Al-Anbar, Salahuddin, Diyala and Babel.

“They arrived in a fleet of 60 cars over 12 hours before the conference,” Joseph Braude, founder and president of the Center for Peace Communications, the U.S.-based group that organized the conference, told JNS.

While expressing his gratitude to the Kurdistan Regional Government for providing logistical and security support, he said the conference was about the parts of Iraq that haven’t engaged with Jews and Israel, “where cultural change is most urgently needed now.”

If the conference surprised many, the reaction to it did not—arrest warrants, death threats and wanted posters the size of buildings targeting participants.

Few who listened to the conference speeches (some of which are available on YouTube with English subtitles) could doubt the courage of those who took part.

The best-known of the speakers, Sheikh Wisam Al-Hardan, who led the “Sons of Iraq Awakening” movement, the Sunni tribal fight against ISIS and Al-Qaeda, demanded “full diplomatic relations with the State of Israel.”

He dismissed Iraq’s anti-normalization laws that criminalize associating with Zionists, saying “we declare here and now that no power, be it foreign or domestic, has the right to prevent us from issuing this call and acting upon it.”

A conference in Erbil, Iraq, hosted by the Center for Peace Communications, September 2021. Source: Screenshot.

‘They want to join the winning team’

On the day of the conference, The Wall Street Journal published an op-ed by Al-Hardan in which he repeated the call for Arab-Israel rapprochement, saying that the next step will be “face-to-face talks with Israelis.”

However, the momentum the conference hoped to build hit a snag. With post-conference pressure mounting—Al-Hardan and other participants faced arrest warrants by the Iraqi government and death threats by Iranian-backed militias—the sheikh disavowed his participation, claiming that he’d been “duped.”

Braude, who told JNS that Al-Hardan had informed him the day after the conference about his intention to recant, said: “Picture you’re driving on the road and a billboard the size of a house has the photographs of the speakers at the conference and calls for their death. They knew that they were courting enormous risk.”

Al Hardan’s disavowal suggests that they didn’t recognize just how great that risk was.

It was Iranian intervention, said Robert Greenway, executive director of the Abraham Accords Peace Institute, who was responsible for U.S. government policy for the Middle East and North Africa on the National Security Council during the Trump administration. Iran saw it as an attack on its inroads into Iraq, he said.

There is “no question” that a rejection of Iran is a major reason for Iraqis’ desire to partner with Israel, Braude acknowledged. “Iraqis naturally identify with people elsewhere in the region who also reject Iranian impositions on their lives.”

But according to Braude, that’s only part of the story.

There’s “an emerging divide” in the region between failed states that have descended into chaos and stable states marked by development, he said. “Iraqis are looking around and seeing their country could go in one direction or the other, and they want to join the winning team.”

‘Baghdad is a city of Jewish ghosts’

For conference participants, Iraq’s Jewish legacy, which dates back 2,600 years, also plays a role. “Aside from Israel itself, Jewish history runs deeper in the land of the two rivers than in any other country in the world,” said Braude.

“Forty percent of the city of Baghdad was Jewish on the eve of the Second World War. It was a much more Jewish city than Brooklyn,” he said. “Baghdad today is a city of Jewish ghosts. And it has proved impossible to excise them from the country.” 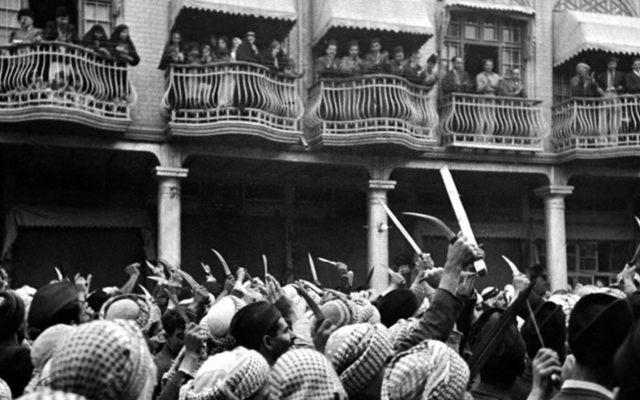 It’s that part of the story that gives Braude’s efforts in Iraq a personal dimension. His mother, who watched the conference online, is an Iraqi Jew, forced to flee her Baghdad home at the age of 5. “I am proud to be the son of a mother born in Baghdad … she raised us with love for Iraq and its people,” he told the conference.

Others at the conference condemned Iraq’s mistreatment of its Jewish population, the majority of whom fled to Israel between 1950 and 1951. “This vile history of dispossession of the Jews also amounted in effect to cutting one of the principal veins of the body of Iraq,” said Al-Hardan. “We acknowledge this injustice and denounce it with all our might.”

Another speaker, Sahar Karim al-Ta’i, a senior official in Iraq’s Ministry of Culture, said of Iraq’s Jews: “They look to Iraq and are still looking to her, waiting for the eyes of their proverbial mother to show affection for her lost children.”

Braude remains optimistic, despite Al-Hardan’s forced about-face. The “vast trend” in Iraqi society is towards peace with Israel, he said, with one opinion poll finding that 42 percent of Iraqis favor immediate normalization.

As further evidence, he pointed to Iraqi interest in the Israel Ministry of Foreign Affairs (MFA) Arabic social-media presence. “On Facebook, for example, it operates two pages. One is called ‘Israel Speaks Arabic.’ It has about 3.5 million followers across the region. The only country-specific MFA Facebook page is ‘Israel in Iraqi Dialect,’ which was created by overwhelming popular demand from Iraqis who followed the pan-Arab page,” he said.

“A few months ago, the number following ‘Israel in Iraqi Dialect’ exceeded 500,000. In other words, there were more Iraqis following the MFA in Arabic than there are Jews living in Tel Aviv,” he noted. Concerned by Iraqis’ eagerness to connect with Israel, Iranian-backed militias began targeting individuals who followed the page, according to Braude.

For Greenway, the public silence in Iraq following the conference spoke volumes. Unpopular statements are “invariably” met with widespread discontent in Iraq; “if you were to denounce the soccer team, for example, you would hear about it,” he said.

Another kind of silence about the conference, which Greenway said was unfortunate, was that of the United States. He noted that this was in part due to its concern not to appear to be injecting itself into Iraqi politics before an election (Iraqi elections took place on Oct. 10). Still, he said the United States should have demonstrated that it stood “side by side with those who are calling for peace.”

Broadcasting that message was especially important after the Afghanistan pullout, he said, which has shaken faith among U.S. partners regarding American commitment to the region.

Greenway, who worked with Al-Hardan and Sons of Iraq “before it was known by that name,” said “we partnered with this man specifically, and his family and organization. He took huge risks. He’s taking huge risks now. And I just think it’s unfortunate that we’re not vocally supporting him as we did when he took up sides with us against ISIS.”

Braude said he doesn’t pretend to know why the United States hasn’t voiced support for the peace conference, though hopes that “the U.S. government will stand with Iraqis who share its commitment to Arab-Israeli peace and the expansion of the Abraham Accords.”

Greenway noted that those he spoke with regionally who are part of the Abraham Accords were encouraged by the conference. “We expect a lot more voices coming out for normalization and for peace,” he said. “It’s my hope in the coming days and weeks that [conference participants] will find out just how wide and far the support, friendship and encouragement is.”

Braude provided the first example of such support. In Syria, an Arab-majority party, the Party of Modernity and Democracy, issued a statement on the anniversary of the 1973 Yom Kippur War “in solidarity with the people of the Erbil conference calling for Syria to also establish peace and partnership with Israel and its citizens.”