Once again, satire has become reality, with the news that a Florida elementary school took students on a field trip to a local gay bar called Rosie’s, according to a school board member who accompanied the children, the Daily Caller News Foundation reported.

Sarah Leonardi of the Broward County School Board wrote Wednesday on Twitter that she “was SO honored to be invited to chaperone.”

She said “the students and I had a fun walk over and learned a lot about our community!”

Apparently, it’s an annual trip hosted by the gay bar.

Photos Leonardi posted of the event show 18 children who appear to be under the age of 10 wearing masks and matching T-shirts, the Daily Caller reported.

The bar’s menu items, according to its website, include “Naked Sweaty Lovin’,” “Beet Your Brains Out” “Rhoda Cowboy,” “Ivana Hooker” and “Young Ranch Hand.”

The Bee’s prescient piece, published in 2019, “reported” Newsom said at the signing of the gay-bar field trip bill that it’s “important that our kids receive a comprehensive education.” 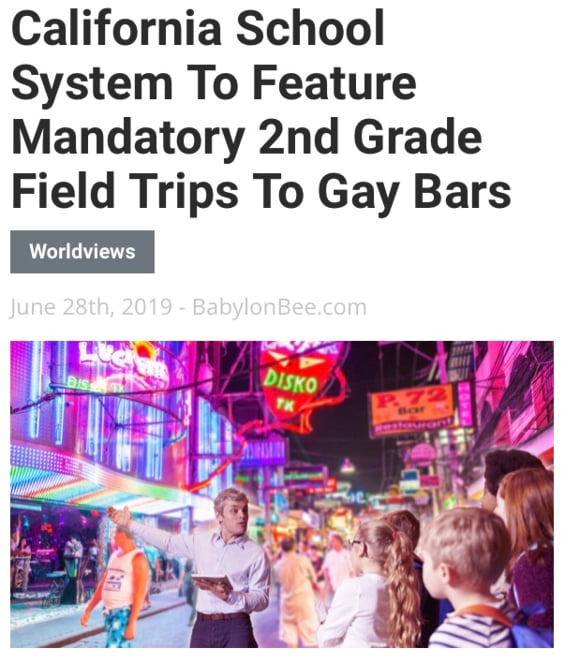 “For too long, kids in our elementary schools today have not had a fully interactive LGBTQ+ experience. Sure, they can go to their local library and have a drag queen read them a story, or they can dress in drag themselves and go dance at gay bars as we applaud their actions. But it’s not enough,” the Bee has Newsom saying in its satirical piece.

Children, the Babylon Bee said, “will be free to ask any questions about the LGBT lifestyle, as long as they don’t condemn it.”

On its website, the Bee describes itself as “fake news you can trust.”

Absurd stories posted daily by the site, which pokes fun of religious, political and celebrity leaders, have been so close to reality that they have been mischaractized more than 30 times by the fact-checking site Snopes and given a “false” rating.

Stories given a false rating by Snopes included headlines such as “California Considering a Tax on Breathing” and “Thanks To New Laws, VeggieTales Finally Introduces New Cannabis Character.”