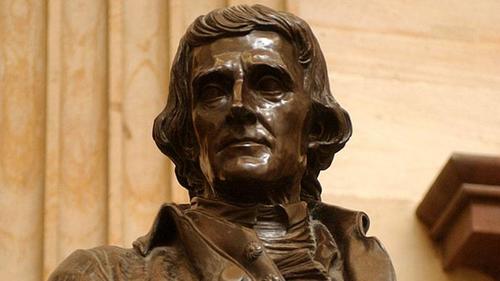 (TJVNEWS) A 200-Year-Old Thomas Jefferson statue is to be removed from the chambers of the New York City council after a unanimous vote by the nine members of the Mayoral appointed Public Design Commission.

Several lawmakers testified that the statue is ‘offensive’, with Democratic Assemblyman Charles Barron of Brooklyn even declaring that Jefferson was a “slaveholding pedophile.”

Barron added “I think it should be put in storage somewhere, destroyed or whatever.”

A local ABC affiliate reports that the statue is “expected to go on ‘long term loan’ to the New-York Historical Society by the end of the year, where it would be included in educational exhibits with the proper historical context that likely will include discussion of Jefferson’s slave ownership.”

NYC Mayoral candidate Curtis Sliwa expressed opposition to the move, asking “Do we suddenly wipe out the images, the markings, the names of all those great patriots because they were slaveholders and slave holding was quite common at that time?”

“The de Blasio administration will continue the progressive war on history as he, himself, fades away into a portrait on a City Hall wall,” the Staten Island member told the New York Post.