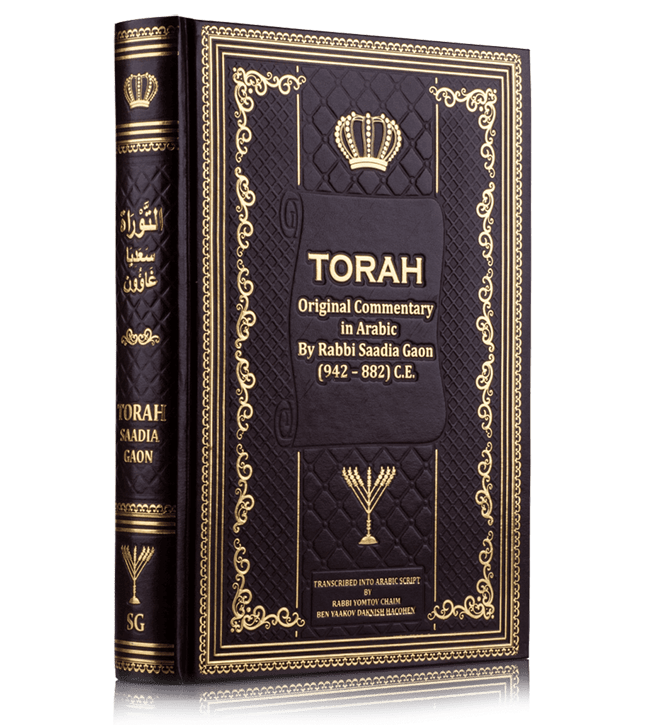 It all began in 2013. During a Chabad campaign to publicize the seven Noahide laws, Chabad chassidim turned to their fellow chassid Rabbi Yom Tov Hacohen, a native of Aleppo, Syria. They requested Rabbi Hacohen’s help in translating the Tanya into Arabic. (The Tanya is the basic book of Chabad Chassidic philosophy.)

The deep and lofty nature of the Tanya caused Rabbi Hacohen to explore the world of translated works of Jewish commentary and thought into Arabic. He wanted to learn key concepts which would help him translate the Tanya into Arabic.

While searching for official Jewish translations Rabbi Hacohen discovered the unique translation of the Torah into Arabic, compiled by Rabbi Saadya Gaon over 1100 years ago. During that time period the majority of Jews lived in Arabic-speaking countries and Rabbi Saadya Gaon thus wrote his commentary in Arabic.

There are two reasons why Rabbi Saadya Gaon’s commentary hasn’t come to light until now:

Stages in decoding and deciphering the handwriting

‏‏There are two stages to the publishing of this work:

Rabbi Yom Tov Hacohen established Project Saadya Gaon in order to decode Rabbi Saadya Gaon’s writing and to publish the Arabic commentary. His goal is to make these writings accessible to all people to learn.

‏The Completion of Stage One

In December 2015, after three years of exacting work to decode Rabbi Saadya Gaon’s handwriting, stage one of Project Saadya Gaon was successfully completed and the commentary was published in literary Arabic. The work is published in a book entitled “Torah in Arabic”.

May it be G-d’s will that we merit the fulfillment of Isaiah’s prophecy of the end of days: “The earth shall be full of knowledge of G‑d as the waters cover the sea.” (Isaiah 40:5)

Rabbi Saadia Gaon (lived 882-942) was one of the most influential personalities to exist in the history of Jewish culture.

He added profound insight and skill to every field of knowledge which he came in contact with, these being mainly: halachic treatise, commentaries on scripture, language, religious thought, and poetry.

He was able to simultaneously pour his insightful, new wisdom into a subject while maintaining age-old Jewish religion and knowledge as well. He maintained the wisdom of the Mishnaic and Talmudic scholars before him while finding a suitable balance with the times that he lived in. He did this by translating scriptures into the accepted Judeo-Arabic language of his day, and aligning his translations with the accepted religious and scientific knowledge of his time period.

(This sefer and others are available for purchase at the biblejew.com web site)

‘Let There Be Light’: First Night of Chanukah 2021 in Photos