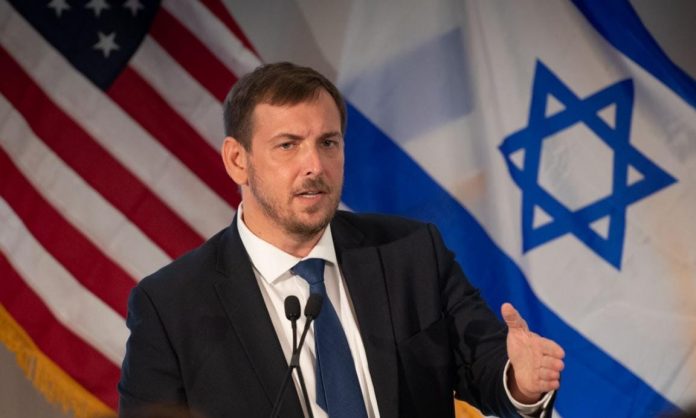 Consul General Asaf Zamir is officially in New York City, beginning his term at the Consulate General of Israel in New York.

Ambassador Zamir, born in 1980, represents the State of Israel and its interests to the states of New York, New Jersey, Pennsylvania, Ohio and Delaware.

“I come with great expectations to work together and to face some of the huge challenges the State of Israel has encountered in the past,” Ambassador Zamir said. “I expect to do it with everyone and serve everyone. It is a great honor to be in New York and experience life in the Big Apple, all while serving the State of Israel.

“We want to be a resource for the Jewish community here, and they should know that the Consulate General of Israel in New York wants to be meaningful and prominent in their lives.”

Ambassador Zamir spent his formative years living in Florida, returning to Israel when he was 9 years old. Zamir completed his national service in the Israel Defense Forces (IDF) as part of the central control unit in the Israeli Air Force. Following Zamir’s national service, he completed his higher education at Tel Aviv University, obtaining a law degree (LLB) and qualifying as an attorney.

“There is no doubt that my goal is to keep Israel as a bipartisan matter and to work with both sides of the aisle,” Ambassador Zamir said. “We will do that by not only working with local politicians, but by having meaningful conversations with the diverse populations in our region. I am coming from Tel Aviv-Yafo, one of the most diverse cities in Israel, and I was appointed to this position by the most diverse government in Israeli history. It’s only natural for me to work with diverse communities.”

In 2008, Ambassador Zamir began his political career. He was elected as Deputy Mayor of Tel Aviv at 28 years old—the youngest person to hold this position in Tel Aviv history—as part of the Rov Halr (majority of the city) Party that he co-founded. Subsequently, he was re-elected to the Tel Aviv Council in 2013, where he retained his position as Deputy Mayor and assumed all responsibility for the city’s education system.

During much of Ambassador Zamir’s time on the Tel Aviv City Council, he also chaired the board of the Yehoshua Rabinovich Foundation for the Arts, where he was active in supporting literature, music, dance, experimental theater and cinema. In 2011, Ambassador Zamir established the Mitpakdim Movement, aimed at motivating youth to enroll as party members to all political parties in Israel. He promoted public awareness about the importance of political activity among Israeli citizens.

In the April 2019 election, Ambassador Zamir entered national Israeli politics as part of the Blue and White Party. In May 2020, with the formation of the national unity government, he was appointed Minister of Tourism. Later that year, he resigned, called for the new elections, and played a key role in the effort that eventually led to the formation of the most diverse government in Israeli history.

With the formation of a new government led by Prime Minister Naftali Bennett in June 2021, Zamir was named as Israel’s new Consul General in New York.

“Asaf has the professional and interpersonal capabilities to represent the State of Israel with honor and pride,” Israel’s Minister of Foreign Affairs Yair Lapid said in June.

Ambassador Zamir replaces Dani Dayan, who served in the post from 2016 through 2020. Israel Nitzan has served as Acting Consul General since Dayan’s departure in August of 2020. Nitzan will continue in his role as Deputy Consul General.

“It was an honor to serve as acting consul general in New York,” Nitzan said. “Throughout the past year, I met many amazing and inspirational people who exemplified why this region is such an outstanding place. Now, we look forward at the future and it is an honor to stand side-by-side with Asaf Zamir.”