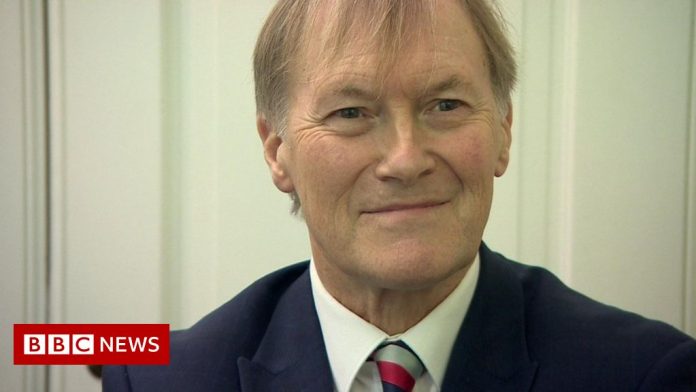 (A7) Methodist Church of Belfairs, Leigh-on-Sea, UK. One of Sir David Amess’ usual venues to meet the electorate. The Conservative MP was outside the church chatting with voters and greeting passersby. A sign at the entrance proclaimed: “Everyone is welcome here”.
When Amess walked in, the voters were already inside waiting for him. Also present was the British terrorist of Somali origin who is now in police custody. He approached Amess and stabbed him 17 times, killing him. Then the Islamist sat down and waited for the police to arrive.

David Amess was one of the Tory’s longest-serving MPs, first elected under Margaret Thatcher in 1983 (he was her “man in Essex”), devoted Catholic, father of five, Eurosceptic, brexiteer, pro-life, member by Conservative Friends for Israel.

The killing of Sir Amess in a church is certainly not accidental. Like Father Jacques Hamel in Normandy, the massacre at the Basilica of Nice, the failed bombing of the Notre-Dame cathedral in Paris, the attack on the Christmas market in Strasbourg and a terrorist plan against the churches of Villejuif, just to name a few.

How did we come to this tragedy? Through our own cowardice.

Through the cowardice of the media and the political class who see fascists and Islamophobes everywhere and carefully cover the traces of the Islamists.

Days ago, a convert to Islam killed five people in Norway. The news was quickly covered up. Ah, if only he had had a swastika tattooed on his arm…

In particular, England’s cowardice regarding Islamic fundamentalism is proof the country took Winston Churchill’s prophecy about the appeaser seriously. He defined an appeaser as “someone who feeds a crocodile because he hopes it will eat him last”.

The cowardice of the establishment is what has prompted them to close their eyes to the 85 perfectly legal sharia courts in the UK.

The cowardice of the establishment is what has led them not to see that half of the British mosques are under the control of the Islamic movement of the Taliban (the Deobandis manage 738 of the 1,600 British mosques).

The cowardice of the establishment is what prompted the UK to refuse asylum to Pakistani Christian Asia Bibi because it could have caused “violent uprisings” by the British Muslim population and endangered embassies in Islamic countries.

The cowardice of the establishment is what prompted the artist Grayson Perry to censor himself “so as not to end up like Theo van Gogh”, the Dutch director murdered for making a film about women in Islam.

The cowardice of the establishment is what prompted the Tate Gallery to withdraw John Latham because he showed the Koran sliced ​​in two.

The cowardice of the establishment is what led Professor Steven Greer to have a course canceled after accusations of “Islamophobia” and having to flee home for fears for his safety.

The establishment cowardice is what prompted a high school teacher in Batley to drop out of school and home after being subjected to death threats for showing Charlie Hebdo cartoons in class during a free speech class and ending up in a “safe house” with his wife and children. “Give us his head,” the Islamists shouted outside the school in Batley, which meanwhile suspended the teacher. The professor’s name was made public, putting his life at risk, by a very legal Islamic NGO.

The cowardice of the establishment is what led, again on the charge of “Islamophobia”, to shred the book of a famous journalist like Julie Burchill.

The cowardice of the establishment is what has prompted museums and libraries that hold dozens of images of Muhammad to “keep them out of the reach of the public,” as the Guardian explained.

The cowardice of the establishment is what pushed Christopher Marlowe’s “Tamerlane”, where the Koran is burned and Mohammed challenged, to be censored at the Barbican Theater in London.

The cowardice of the establishment is what prompted Sky News to black out the Charlie Hebdo cartoons during a link in which a French journalist tried to have them framed. Sky News disconnected, went back to the studio and apologized “to those who feel offended by these images”. It is the great ritual phrase of those who wave the white flag.

Piece by piece, through succumbing to Islamic intolerance, cowardice led to the murder in broad daylight, inside a church, of an English parliamentarian, on the first anniversary of the beheading on the street of Professor Samuel Paty in France.

Sooner or later in Europe they will have to open a discussion on whether or not self-censorship and concessions to radical Islam have been the the right way to defend freedoms, civilization and democracy, and what led to the damnation of Western countries.

Giulio Meotti is an Italian journalist with Il Foglio and writes a twice-weekly column for Arutz Sheva. He is the author, in English, of the book “A New Shoah”, that researched the personal stories of Israel’s terror victims, published by Encounter and of “J’Accuse: the Vatican Against Israel” published by Mantua Books, in addition to books in Italian. His writing has appeared in publications, such as the Wall Street Journal, Gatestone, Frontpage and Commentary.

Temple Emanu-El Joins Cancel Culture —Against Israel and its Sympathizers

The Hate That Dare Not Speak Its Name