Why Do We Dip the Apple Into Honey on Rosh Hashanah? - The Jewish Voice

Why Do We Dip the Apple Into Honey on Rosh Hashanah? 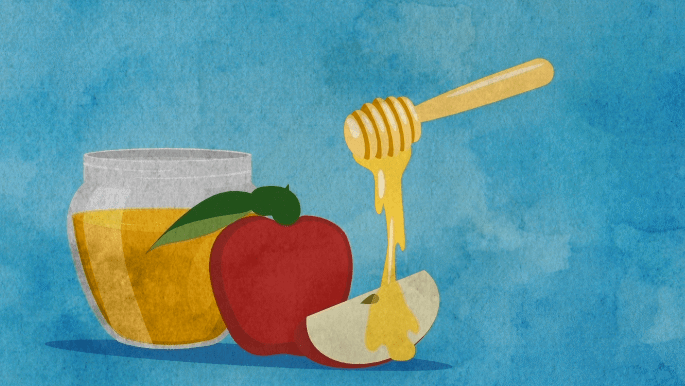 By Yehuda Shurpin(Chabad.org) One of the classic symbols of Rosh Hashanah is the apple dipped in honey. On the night of Rosh Hashanah, after we have made kiddush, washed, and dipped the challah into honey,1 we dip a sweet apple into honey.2

Before eating the apple, we make the ha’etz blessing and then add:

Ye-hi ratzon she-ti-cha-desh alei-nu shanah tovah u-metu-kah—“May it be Your will to renew for us a good and sweet year.”

Some have the custom to specifically use a red apple (perhaps due to its sweetness) based on the writings of Rabbi Simcha of Vitri (d. 1105 C.E.), who in his classic work Machzor Vitri records that this was the custom in France in his day.4

Interestingly, although we eat many symbolic foods on Rosh Hashanah (see Why All the Symbolic Rosh Hashanah Foods?), the apple is the most prominent. It is eaten at the very beginning of the meal before we enjoy all the other delicacies. Furthermore, even those who have the custom not to say a short prayer before each food is eaten (such as Chabad) do recite it before eating the apple dipped in honey.

So what is the significance of the apple dipped in honey?

The basic explanation is that we should have a “sweet new year,” but there are many deeper reasons given for this custom as well. Here are a few of them:

Jacob and the Scent of the Apple Orchard

On Rosh Hashanah we pray that we too should ultimately receive blessings, just as Jacob did.

Reminder of the Giving of the Torah

Rabbi Saadia Gaon explains that one of the reasons for blowing the shofar on Rosh Hashanah is that when the Torah was given, there was a great shofar blast. Similarly, some explain that the verse in Song of Songs, “Under the apple tree I aroused you,”9 is a reference to the Giving of the Torah. So just as on Rosh Hashanah day we blow the shofar as a remembrance of the Giving of the Torah, we eat the apple at night.

This is another reason why we dip the apple into honey: the Torah is also compared to sweet honey, as the verse in Song of Songs10 states, “Your lips drip flowing honey, O bride; honey and milk are under your tongue . . .”11

G‑d Should Answer Before We Call Out

Like the apple, which buds even before leaves are grown, our ancestors expressing their willingness to obey G‑d without even knowing what he would demand.

When we eat the apple, we are asking G‑d that he treat us in a similar manner, fulfilling our wants and needs even before we call out to Him.14

A Kabbalistic Reason: A Little Shade

The Tzemach Tzedek explains that every month corresponds to one of the 13 Attributesof Mercy. Tishrei, the seventh month (counting from Nissan), corresponds to the attribute of emet, truth. For in Tishrei, the divine essence (Atzmut) is revealed without any hindrance or contraction, and through our repentance and teshuvah in this month we reach Atzmut.

Song of Songs states, “As an apple tree among the trees of the forest, so is my beloved among the sons; in his shade I delighted and sat, and his fruit was sweet to my palate.”15 The Midrash16 comments on this verse that the apple tree does not give off shade, and the commentaries explain that its shade is very minute. The mystics say that shade represents a contracted level of Makif (i.e., the surrounding or the transcendental aspect of the divine emanation). All the fruit trees receive their divine energy from this level of revelation, with the exception of the apple tree.

The apple is rooted in Tiferet(“splendor”) and receives directly from the level of emet, which has no shade (i.e., contraction).

Thus, we eat an apple, alluding to the level of emet through which we can reach the essence of the divine.17

In explaining the after-blessing “Borei Nefashot” (בּוֹרֵא נְפָשׁוֹת), which is recited after eating food not made from grain or the seven fruits with which Israel was blessed, Tosafot18 explains some of the wording as follows: “Blessed are You . . . Creator of numerous living beings and their needs” is a reference to our basic needs like bread and water. “For all the things You have created with which to sustain the soul of every living being” is a reference to things that are beyond our basic needs “such as apples and the like.”

Since apples are given as an example of things beyond our very basic needs, on Rosh Hashanah we pray that we are not only provided with the basics, but extras as well.19

The Talmud relates that on Rosh Hashanah, Sarah, Rachel and Hannah, who were all barren, were “remembered” by G‑d and conceived their children (Isaac, Joseph and Samuel).20

The Hebrew word תפוח (tapuach, “apple”) has the same numerical value as the words פרו רבו (peru u’revu, “be fruitful and multiply”). And the Hebrew word דבש (devash, “honey”) has the same numerical value as אשה (ishah, “woman”). Thus, we are praying that women who need to be blessed with children should be blessed, just as Sarah, Rachel and Hannah were on this day.21

One of the central themes of Rosh Hashanah is remembering the Akedah (“Binding of Isaac”) and the blessings that G‑d gives Abraham after he offered the ram instead of his son Isaac.

The Talmud tells us that the middle part of the altar, where all the ashes were piled up, was called the תפוח (tapuach, “apple”). Additionally, the words שה עקידה (seh akedah, “the ram of the Akedah”) has the same numerical value as תפוח. Thus, we eat the apple to allude to the ram that was brought instead of Isaac, symbolizing how the seemingly severe judgement was transformed into positive—which we pray happens on Rosh Hashanah.22

Sweeten the Severity of Wine

The Zohar23 states that it was customary to eat an apple after drinking wine in order to prevent the wine from causing injury. Thus, we see that the apple serves to “sweeten” the wine, which comes from the attribute of gevurah, severity. Therefore, on Rosh Hashanah, when part of our focus is to sweeten any harsh judgment or severity, we eat an apple at the beginning of the meal to “sweeten all severities.”24

Unlike some other fruits, an apple has a pleasant appearance, taste and fragrance. These three qualities correspond to the three main categories of blessings that we pray that G‑d grant us: children (nachat), good health, and ample livelihood.25

The Merit of the Righteous Women

The Talmud26 relates that when Pharaoh decreed that every baby boy be thrown into the Nile,27 some men abstained from relations with their wives. What did the women do? They went to draw water, and G‑d ensured that half of their jugs were filled with water, and half with small fish. They would return home and place two pots on the fire, one for hot water and the other for the fish, which they would bring to their husbands in the field. There they washed their husbands, anointed them, fed them and enticed them to engage in intercourse, despite the enslavement and the forced labor.

When the time came for the women to give birth, they cast their gaze heavenward and said to G‑d: “I have done my part regarding what You said, ‘Be fertile and multiply,’ now You do Your part.” The women would go to the fields to prevent the Egyptians from killing their sons and would give birth under the apple trees, as it says: “Under the apple tree I roused you; it was there your mother conceived you, there she who bore you conceived you.”28

Thus, we invoke the merit of our righteous women and ask that we be blessed for a sweet new year.29

We’ve thus far mostly focused on the apple. Here are a few additional explanations for why we use honey on Rosh Hashanah.

It should be noted that some have the custom to actually use white sugar instead of honey since sugar comes from the attribute of chesed (“kindness”) and honey from the attribute of gevurah (“severity”).30 However, as we shall see, honey is actually gevurah shebechesed, “sweetened severity,”31 and that itself is a reason to use it on Rosh Hashanah.

From Judgment to Sweetness

We use bee honey, for just as a bee stings but then gives sweet honey, so too we pray that we emerge from the attribute of severity and judgment into sweetness.32

From Sins to Merits

There is an opinion (albeit halachah does not follow it) that if a halachically problematic food falls into and disintegrates in honey, the entire food is considered as if it is honey and is therefore permitted to be eaten.33 So we dip the apple (and challah) into honey to allude to this opinion, praying that our sins be turned into merits.34

The numerical value of the word דבש (devash, “honey”) is equal to the words אב הרחמן and אב הרחמים (Av Harachaman and Av Harachamim, “The Merciful Father” or “Father of Mercy”). Thus we eat the apple dipped in honey as we ask for G‑d’s mercy on this day of judgment.35

Pure Even From an Impure Place

May we all merit a happy, healthy, sweet new year!