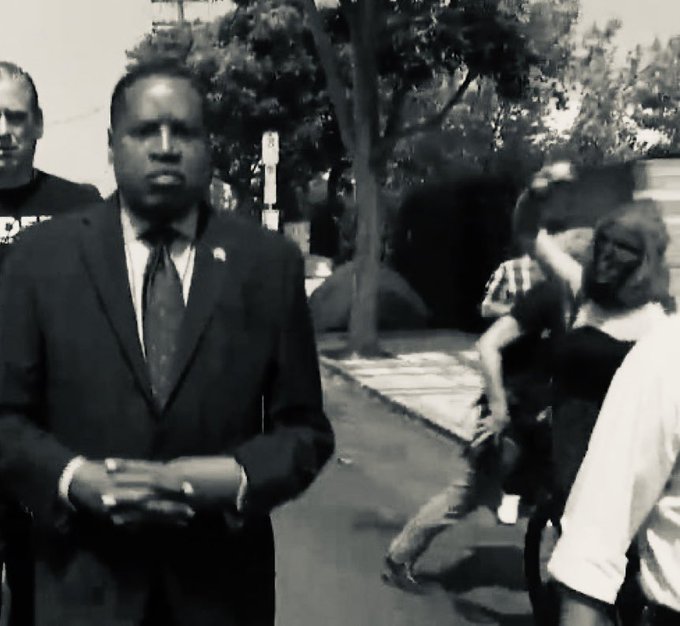 So is butt-naked racism against the man who may become California’s first black governor O.K. so long as a Democrat is doing it?

Apparently so, based on how the Los Angeles Times is covering yesterday’s egg-hurling incident.

A leftist white woman in a gorilla mask, unsubtle as she could get, hurled an egg at the head of gubernatorial candidate Larry Elder in Venice, California, nearly hitting him, as did another leftist later as Elder was hustled off by his aides into an SUV.

The newspaper that called Larry Elder a “white supremacist” in a headline now refuses to state in a headline that a white person wearing a monkey mask attacked him. https://t.co/wwgV8FMt4s

Would they write the same kind of blase headline were say, Stacey Abrams, attacked by a white wearing a gorilla mask? The question answers itself.

As Saavedra notes, this would be the same Los Angeles Times that ran a headline a couple of weeks ago calling Larry Elder “the black face of white supremacy,” in some amazingly pretzeled Orwellian newspeak.

That didn’t work, of course, so now, they claim that Elder was leaving based on the “hostile reception” he drew as if were the bad guy here who somehow brought on a bad reaction from some displeased voters because he somehow brought it on himself by his unpopular ideas. The racist nature of the attack and the disgustingness of the human being who launched the projectile attack, which could have caused injury, were never focused on. Who was she, and why wasn’t she arrested for assault intended to interfere with the democratic process, that same democratic process Democrats are still howling about in the Jan. 6 incident? Nope, this was just a “hostile reception,” something supposedly to be expected, instead of a racist organized attack. Nothing to see here…

Was Bull Connor resisting racial desegregation orders in the Jim Crow South just a ‘hostile reception? Were the lumpy characters blocking the schoolhouse door and spraying foul graffiti complete with hurled tomatos to a little black girl in New Orleans in 1964 just a “hostile reception”?

Or was the actual story as it had to be covered at the time all about racists who saw their power structure crumbling with their response to that was to use violence and force?

Take a look at how eerily similar the attack on Elder photo looks, when cast in black in white, to the photos from the Civil Rights era.

In black and white this photo feels very reminiscent of the dark history of deep racism in the Democratic Party. They may have new masks but the hate is still alive within so many of them. The rest of us have @larryelder’s back. pic.twitter.com/Av1fOeyY1Q

Take a look at Norman Rockwell’s iconic 1964 “The Problem We All Live With” painting of the Civil Rights era, which is brimming with evidence of violence in the filthy graffiti from some “activist” splattered right in the middle of the painting, and of course, the smashed hurled objects similar to eggs, in this case, tomatoes.

Was that a “hostile reception” or was it about something much more? Hint: You can find it in the title of the painting.

But to the Los Angeles Times, this attack was somehow a routine little thing, rather than bare-naked racism, as it is now practiced by the left which views itself as bulletproof to ‘racism’ charges no matter how many racist acts it does.

It’s obvious as heck that hurling eggs at California’s first black gubernatorial candidate while wearing a gorilla mask is about racist as it gets. After all, there are all kinds of masks out there and this white woman selected the black gorilla mask as her “statement” about Elder, knowing that she’d get her picture with herself in it in the news from this attack. We need her name — and to see her charged with assault and hate crimes.

You’d think that Elder’s opponent, Gov. Gavin Newsom, would have said something just to distance himself from the racist attack. After all, he’s still trying to get the black and Latino vote over to his side. But actually. he’s said nothing.

Where is Black Lives Matter? The organization was founded in Los Angeles by UCLA leftists, and its founder still has her spreads in Malibu and South Central. They too have said nothing.

But Los Angeles Times is particularly disgusting in its coverage, completely casting a false light on what went down and trying to make it look like a routine case of Elder bringing these naked racist attacks onto himself, if not cast racism versus a black guy threatening the power structure as just a trifle of political disagreement amounting to a hostile reception. In fact it was a couple of racist disruptors trying to shut down free speech, free political activity and silence a black candidate’s right to reach out to the voters.

It’s appalling. This racism has to be held up to public shame because it certainly is the problem we all live with today.

Trump: ‘Our Country Has Turned Into a Migrant Camp’; ‘This Is an Invasion’