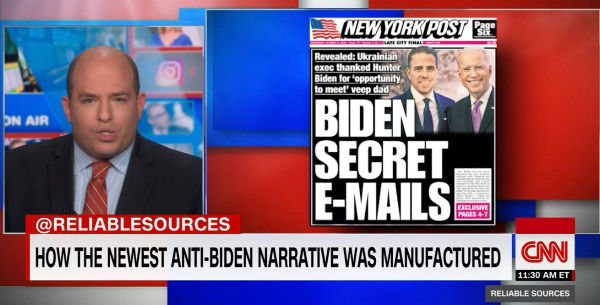 By Art Moore(WND NEWS CENTER)  Was the current president of the United States part of a multi-million-dollar family-business deal with a major Chinese energy firm with close ties to the Communist Party?

When strong evidence for that claim was presented weeks before the 2020 election, establishment media latched on to an unsubtantiated claim by former U.S. intelligence officials that it was all part of the “latest” Russian plot to influence an American election, amounting to “disinformation.”

Now, with President Biden’s political capital plummeting, an establishment media reporter has released a book confirming the authenticity of bombshell evidence 11 months after it was done by alternative media.

Politico reported a book released Tuesday by one its national political correspondents, Ben Schreckinger, presents “evidence that some of the purported HUNTER BIDEN laptop material is genuine, including two emails at the center of last October’s controversy.”

The book, “The Bidens: Inside the First Family’s Fifty-Year Rise to Power,” cites a person who had independent access to Hunter Biden’s emails who confirmed the authenticity of a 2015 email from an advisor for the corrupt Ukrainian firm Burisma thanking him for introducing him to Joe Biden. That conflicts with the president’s repeated insistence that he knew nothing about his son’s deals.

But more importantly, the Politico reporter’s source confirmed the authenticity of a 2017 email regarding the deal with CEFC Chinese Energy stating 10% of the profits were to be held “for the big guy.”  The “big guy” was identified as Joe Biden last October by former Hunter Biden business partner Tony Bobulinski after the New York Post reported the emails were discovered on a laptop abandoned by Hunter Biden.  Joe Biden, Bobulinski claimed, was an active participant in his son’s overseas business dealings while serving as vice president. In fact, Bobulinksi said he met twice with Joe Biden to discuss the deal with CEFC Chinese Energy, giving the impression that the then-vice president had the final say in the business dealings of his son and brother James Biden.

Schreckinger also reported that emails released by a Swedish government agency match emails in the cache from Hunter Biden’s laptop. And two people who corresponded with Hunter Biden confirmed emails from the cache were genuine, the author found.

However, there was plenty of evidence available before the 2020 election to confirm the authenticity of the messages on Hunter Biden’s laptop after the Post reported the emails indicating Joe Biden knew about his son’s lucrative deals and profited from them.

Among other things, Hunter Biden did not dispute the claim that the laptop was his, no one mentioned or copied in the messages repudiated their authenticity, and a cybersecurity expert conducted a forensic analysis of the metadata finding the emails were genuine.

Emails from the laptop also show that Hunter Biden was to receive $10 million annually for three years from CEFC Energy for “introductions alone,” presumably meaning to his father and other influential U.S. officials.

A Senate report released in December concluded that members of Joe Biden’s family engaged in deals with Chinese nationals who had “deep connections” to the Communist Party.

Significantly, a Media Research Center poll found that nearly one-third of voters who chose Joe Biden were not aware of the evidence linking the former vice president to corrupt financial dealings with China and other nations through his son. Had they known, according to the survey, President Trump would have won at least 289 Electoral College votes.

For his book, Schreckinger asked the White House whether Joe Biden had an April 2015 encounter with Burisma adviser Vadym Pozharskyi at Cafe Milano. A White House spokesman did not respond directly but instead referred to an April Washington Post article that includes a campaign denial of any meeting. The article confirms Joe Biden was at the dinner but casts doubt on any encounter there with Pozharskyi. The Ukrainian businessman did not respond to requests for comment.

The Ukrainian firm Burisma paid Hunter Biden a substantial monthly salary to sit on its board while it was under investigation by the country’s top prosecutor for corruption. Joe Biden — who as vice president was tasked by President Obama to oversee Ukraine policy — is on record boasting that on a visit to Kiev, he coerced Ukraine’s president to fire the prosecutor after threatening to withhold $1 billion in U.S. military aid.

When the New York Post broke its bombshell stories, establishment media wanted nothing to do with them, ignoring susbstantial evidence that the Democratic Party’s presidential nominee is beholden to America’s most powerful enemy and to politicians in many other countries where Hunter Biden leveraged his father’s political power.

CNN’s Wolf Blitzer reported the laptop story was about whether or not the Russians were using Trump lawyer Rudy Giuliani “to push Russia’s latest and very massive disinformation campaign in the U.S. presidential election.”

“Massive indeed,” intoned a CNN reporter. “Well, we do know that it’s a very active Russian campaign. That’s according to the U.S. intelligence community.” The FBI was investigating the disinformation claim, the reporter said.

However, it later turned out the FBI had seized Hunter Biden’s laptop a year earlier in an ongoing investigation. And then-DNI John Ratcliffe immediately disclosed that the intelligence community had no evidence of Russian disinformation. But the media stuck to the storyline, based on a letter — reported by Politico — that was signed by 51 former senior intelligence officials, including former director of national intelligence James Clapper and three former directors of the CIA, Mike Hayden, Leon Panetta and John Brennan.

The former officials offered no evidence, saying the laptop story had the “hallmarks” of a Russian “information” operation. The media then turned that into “disinformation” and used the narrative to justify ignoring the story.

What’s most amazing about all of this is that the NYT/CNN/NBC/HuffPost/Vox axis will spend countless hours objecting to Big Tech censorship before the election in Russia, while they themselves perpetrated the same thing in the US, and will now ignore these new revelations.

CNN’s Christiane Amanpour insisted it wasn’t the media’s job to determine whether or not the explosive claims were true:

2) CNN’s @camanpour — the week before the election — explicitly refusing to discuss the reporting on the Biden family by claiming that it’s not the media’s job to determine if the documents are or are not authentic. Watch this shit:pic.twitter.com/mkI4Jtd4SN

See a segment of Tony Bobulinski’s interview with Tucker Carlson: