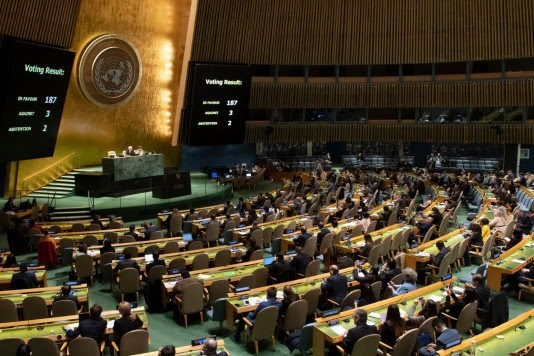 By SIMON KENT The U.N. General Assembly will ignore vaccine requirements for attendees at next week’s big meeting in New York, snubbing NYC rules for convention centers and public gatherings.

Presidents, premiers, monarchs, dignitaries, diplomats and their traveling staff members have been told by organizers they won’t have to show coronavirus vaccination passports or other proof of inoculation on arrival at U.N. headquarters on Turtle Bay, Manhattan.

Instead attendees plus their staff will be waved through and allowed admission free of any checks with more than 100 heads of state and government and over 20 foreign ministers signed up to speak in person.

An honor system — and only an honor system – means dignitaries won’t have to show vaccination cards or other proof of inoculation as they’ll simply attest to it by swiping their ID badges at the assembly hall.

The freedom from regulation follows a precedent first set at the G7 meeting in the UK earlier this year.

The decision to ignore the rules as applied to the general public in NYC came after Russia challenged an earlier proof of vaccination requirement on the grounds it was an infringement on personal liberties.

“We strongly object that only people with a proof of vaccination should be admitted to the GA hall,” Russia’s ambassador Vassily Nebenzia wrote in protest to U.N. officials.

He described it as “a clearly discriminatory measure”, adding that preventing delegates access to the hall was a “clear violation of the U.N. charter.”

Brazilian President Jair Bolsonaro for one isn’t vaccinated and reiterated Thursday he has no plans to get the coronavirus shot anytime soon, AP reports.

“Why take the vaccine? To have antibodies, isn’t that right? My antibody levels are way up high,” Bolsonaro said in a live broadcast on social media Thursday night. “After everybody in Brazil is vaccinated, I’ll decide.”

The AP report said a message sent to New York Mayor Bill de Blasio’s office wasn’t immediately returned. He has previously maintained  the city’s aim is to protect both assembly attendees and New Yorkers from the virus.

U.S. President Joe Biden is on the speaker list.

The prime ministers of Japan, India and the United Kingdom will also be at U.N. headquarters to deliver their country’s speech to the 193-member assembly, along with Israel’s new Prime Minister Naftali Bennett and Palestinian President Mahmoud Abbas.

Another 23 foreign ministers are slated to speak in person as well, according to the list obtained by AP.

The 76th session of the general assembly starts on Tuesday and finishes the following Monday.

The Associated Press contributed to this story