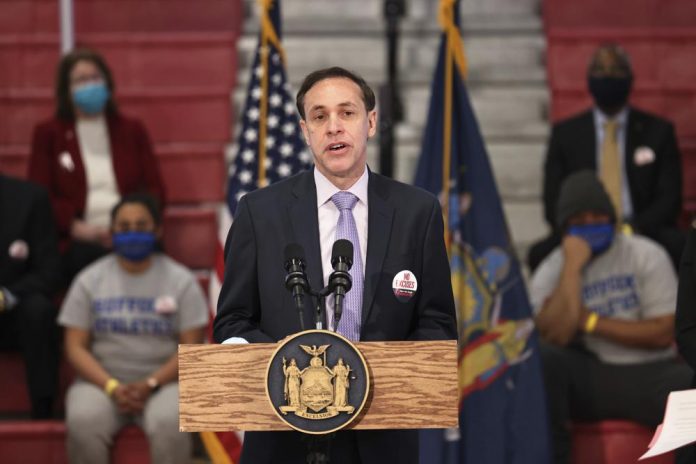 Hochul thanked Zucker for his service and said he has agreed to stay on until the state names a new commissioner.

“I agree with his decision,” said Hochul, adding that Zucker’s resignation follows her previously announced plans to hire her own team. Her predecessor resigned in the wake of a damning attorney general report that found Cuomo sexually harassed at least 11 women.

Zucker, appointed by Cuomo as health commissioner in 2015, was a leading figure in the state’s pandemic response last year as the New York City metro area became one of the world’s worst COVID-19 hot spots.

Cuomo often praised Zucker for his leadership, and the two appeared together regularly at the Democrat’s widely watched televised briefings. Cuomo touted Zucker’s resume: he became one of the nation’s youngest doctors at age 22, later earned a law degree, and worked at the White House and World Health Organization.

Under Zucker, the Department of Health worked with hospitals statewide to ensure a surge of COVID-19 patients wouldn’t catastrophically overwhelm hospital systems.

But Zucker has faced heated criticism over the state’s COVID-19 response, particularly in nursing homes.

Nearly 16,000 people living in nursing homes and other long-term care homes in New York have died of COVID-19, according to state data.

Zucker has also faced criticism from health care workers who said the state failed to ensure hospitals and nursing home personnel had adequate personal protective gear and staffing levels during the peak of the pandemic.

Zucker and Cuomo defended the directive as needed to free up beds in hospitals in case of a disastrous surge of patients, and to ensure COVID-19 patients weren’t languishing in hospitals.

At that time in the spring of 2020, limited COVID-19 testing made it difficult for nursing homes to know whether admitted patients were contagious.

By May 2020, the state withdrew the directive and required hospitals to test patients for COVID-19 before transferring them to nursing homes.

By July of that year, the health department released a report arguing that the main driver of COVID-19 infections in nursing homes were unknowingly infected staff and visitors and not the March directive.

But the report’s findings were limited: it excluded thousands of deaths of nursing home residents who later died in hospitals, for example. And the Cuomo administration declined to say whether its findings suggest the directive may have worsened outbreaks in any nursing homes.

Cuomo staffers and health officials clashed over a decision to exclude the higher death tally from the report.

Zucker’s agency long declined to release such COVID-19 data despite requests by media and lawmakers. Cuomo said the state needed to verify data, but has acknowledged the decision fueled misinformation.

Hochul reversed the Cuomo administration’s practice of publicizing only a fraction of COVID-19 deaths in daily press releases.

Zucker praised Hochul’s “commitment” to transparency at an August health department committee meeting, saying: “Her leadership allowing me and all of DOH to get the data out is refreshing.”

Zucker’s role in the state’s management of the pandemic may also resurface in an anticipated report from the Assembly Judiciary Committee.

The committee’s wide-ranging impeachment probe of Cuomo is looking at the administration’s handling of COVID-19 data, as well as efforts to rush COVID-19 testing for Cuomo’s inner circle when tests were scarce in spring 2020.

In one instance, a Zucker aide tested Cuomo’s brother Chris at his Hamptons home. It’s not clear when the committee will release its findings, but it has said they are coming “soon.”