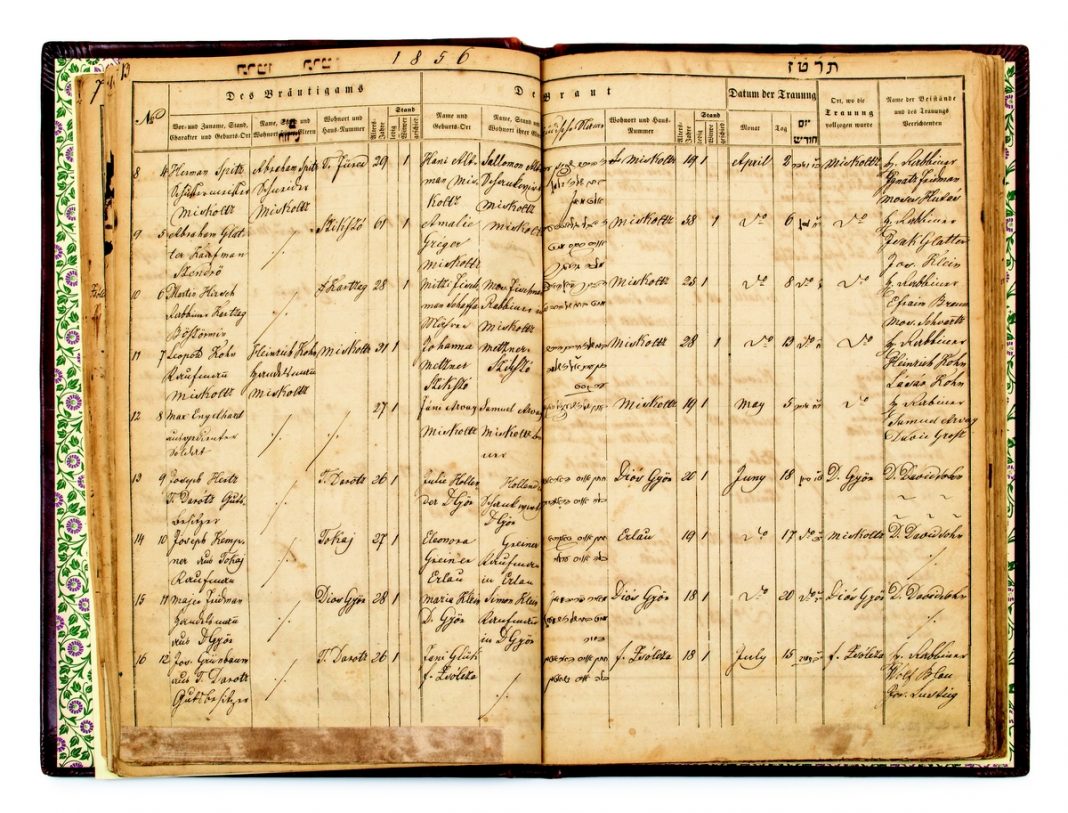 The Hungarian Jewish Museum and Archives (HJMA) and the National Library of Israel (NLI) are proud to announce the joint purchase of seven documents from the 19th and 20th centuries, related to Jewish life in what is now Hungary. These documents include thousands of birth, death, marriage and other records from six different Jewish communities, including a number pertaining to prominent Hungarian Jewish figures, and many from the Holocaust period – immediately prior to the Nazi occupation and following the war.

Not available anywhere else or yet digitized, these documents will present valuable contributions to historical and genealogical research.

After appearing in the catalog of a Jerusalem auction house in August 2021, the items were removed from auction at the request of activists and organizations dedicated to the preservation of Jewish heritage. Following the joint purchase, the NLI and HJMA have committed to digitizing and making high-resolution scans of these documents freely available on the internet, as well as preserving the originals under the highest standards of archival storage.

The National Library of Israel and the Hungarian Jewish Museum and Archives share a commitment to public ownership of Jewish and European heritage.

We are convinced that privately held Jewish community heritage documents should ultimately reside in public archives and libraries. Sale or donation to such public institutions is the ideal permanent solution. Only professional archives with an active digital presence and a dedication to the preservation of Jewish heritage can properly care for these documents. We encourage all those who hold such artifacts to approach the NLI, HJMA, or other professional archives for a similar arrangement.

These are not the kind of documents that should be kept in private hands, inaccessible to the public.

Over the course of 2021, several similar items have been removed from auctions, and even been seized by law enforcement. This has had the tragic but unintended consequence of distancing heritage documents from public ownership and protection. Items that are at risk of seizure by law enforcement agencies will remain hidden, and they will therefore not be preserved and digitized by professional archives. Law enforcement should be involved only in cases of clear evidence of theft, rather than a general concern about provenance after the tragedies and triumphs of modern Jewish history. “Return” of such documents to towns without large Jewish infrastructures, professional archival storage, an accessible digital presence, or without continuity with Jewish communities that once lived there is also not a good long-term solution.

Staff of the NLI and HJMA would like to thank the numerous private researchers who have helped inform the public about these matters and protect priceless Jewish heritage. We look forward to cooperating with them again in the future.

Documents acquired through the joint purchase:

About the Hungarian Jewish Museum and Archives

The Hungarian Jewish Museum and Archives operates under the auspices of the Federation of Jewish Communities of Hungary and preserves artifacts and documents of the Hungarian Jewish past. The HJMA consists of two subunits. The permanent collection of the Museum has been accumulated since 1910 and collects various types of Judaica. The Archives holds the most comprehensive Jewish archival collection of Europe still in situ. The Archives has approximately 1,400 linear meters of community papers, including vital records, illustrated Chevra Kadisha books, and visual documentation (such as photographs or postcards). The overwhelming majority of the material belongs to the archival heritage of the so-called Neologue branch of Judaism in Hungary. A large part of the collection is available online in digital form. The HJMA also provides content for various international networks dealing with Jewish heritage – including the NLI’s Pinkasim Collection.

About the National Library of Israel

Founded in Jerusalem in 1892, the National Library of Israel (NLI) serves as the dynamic collective memory of the Jewish people worldwide and Israelis of all backgrounds and faiths. While continuing to serve as Israel’s pre-eminent research library, NLI is now in the midst of an ambitious journey of renewal to encourage diverse audiences in Israel and around the globe to engage with its treasures in new and meaningful ways. Among the millions of items in its collections, the NLI, together with its affiliated Central Archive for the History of the Jewish People (CAHJP), holds hundreds of communal ledgers as well as hundreds of thousands of pages related to Central and East European Jewish life in the modern period. It houses The Pinkasim Collection, dedicated to the digitization of early modern Jewish ledgers and record books from around the world.