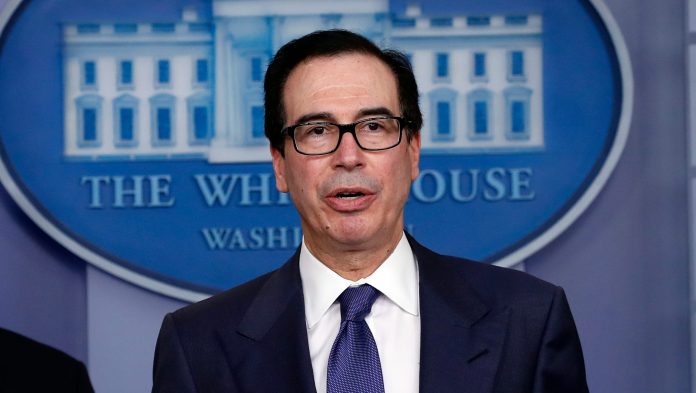 Former Treasury Secretary Steve Mnuchin is back in the news and this time he is raising some serious money. According to a report in the New York Times, Mnuchin has raised $2.5 billion at his new private equity fund. The information given to the Times were from people who are familiar with the matter.

Thus far, Mnuchin, (who prior to serving in Donald Trump’s cabinet as treasury secretary was a banker at the Goldman Sachs firm as well as a film investor and hedge fund manager) has succeeded in garnering investments from sovereign wealth funds in the Middle East, including Saudi Arabia’s Public Investment Fund.  The Times reported that the fund is focused on technology and financial services investments. This summer, the former treasury secretary opened an office in Tel Aviv, Israel.

When first assuming the position of Treasury Secretary in the Trump administration, Mnuchin’s net worth was at $400 million, according to the Times report. Now, the paper of record has suggested that Mnuchin’s new venture in private equity means that he might be leveraging his financial experience and contacts to continue to build his personal portfolio.

While there is nothing that borders on illegality in terms of what Mnuchin is doing, questions have been raised about whether Mnuchin used his position in the treasury department to enrich himself. Because Mnuchin traveled to Israel, Saudi Arabia and other countries in the Middle East and it is in that region that his investment dollars are coming from,  he is under scrutiny from those who believe that self-dealing might be at play.

As such, a lawsuit has been filed to ascertain information about the cost of Mnuchin’s travel to the Middle East as he conducted extensive travel to that region while serving in the White House. A watchdog group known as Citizens for Responsibility and Ethics in Washington initiated the suit.

The Times reported that the group has said that,  “Mnuchin should not have made any official decisions based on how he could profit off of them after leaving office — if he did, he must be held accountable.”

Mnuchin is not the only former treasury secretary to move on to private equity subsequent to leaving office. Others in that role such as Jacob J. Lew and  Timothy F. Geithner  have also pursued the same path, as was reported by the Times.

While in the role as treasury secretary, Mnuchin focused on sanctions policy and according to the Times report took annual trips to the Middle East as part of efforts to start a Terrorist Financing Targeting Center that is based in Riyadh. While in Saudi Arabia, Mnuchin made multiple visits to the Future Investment Initiative, a business conference known as Davos in the Desert that is organized by the Public Investment Fund.

After leaving office, Mnuchin continued to travel to the Middle East. Speaking to the Jerusalem Post while on a trip to Israel in June. Mnuchin said that he was setting up an office there because of the country’s strength in the cybersecurity technology and financial technology sectors, which will be focuses of the fund, as was reported by the Times.

“We hope to be considered one of the best strategic partners in these areas,” Mnuchin told The Jerusalem Post.

Groups considered with possible ethics violations have been scrutinizing the cost of Mnuchin’s travel expenses since leaving office because he continued to receive protection from the Secret Service for six months after his role in the White House ended, as was reported by the Times.

Last week, the Washington Post reported that the federal government had been paying thousands of dollars for Mnuchin’s secret service staff while he traveled to the Middle East this past summer. In addition to traveling to Israel, he also went to Qatar.