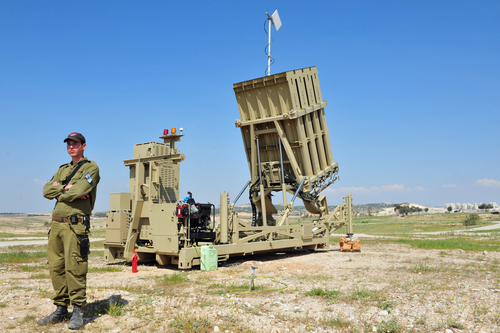 During the debate on the bill Thursday, Representative Rashida Tlaib (D-Mi) criticized the funding of Israel’s Iron Dome as “weapons Apartheid.”

“I will not support an effort to enable war crimes and human rights abuses and violence. We cannot be talking only about Israelis need for safety at a time when Palestinians are living under a violent apartheid system, and are dying from what Human Rights Watch has said are war crimes,” Tlaib said.

“The bill claims to be, quote, a ‘replenishment’ for weapons apartheid Israel used in a crisis it manufactured when it attacked worshippers at one of the most holiest Islamic locations, the al-Aqsa Mosque, committing again numerous war crimes,” she added,

“To advocate for the dismantling of the one Jewish state in the world, when there’s no place on the map for one Jewish state, that’s antisemitism and I reject that,” Deutch said.

The bill was introduced after far-left Democratic Congressmen got a provision providing $1 billion for resupply of Israel’s Iron Dome missile defense system removed from an emergency government funding bill on Wednesday.

Democrat Rosa DeLauro (CT), who chairs the powerful House Appropriations Committee, announced overnight that the aid to Israel had been cut from the temporary spending bill.

“The earlier version of the legislation included an anomaly to the continuing resolution to provide funding for the government of Israel related to the Iron Dome. The version before you does not contain that anomaly,” DeLauro said.

“Let me explain why: The production of the Iron Dome system component is at full capacity and it can take 12 to 18 months from when funding is appropriated until it is received by Israel.”

“The Memorandum of Understanding with the government of Israel lays out a co-production agreement for funds in the annual spending bill for Israeli cooperative programs.”

DeLauro vowed that the US would “fully live up” to its commitments to Israel at a later date.