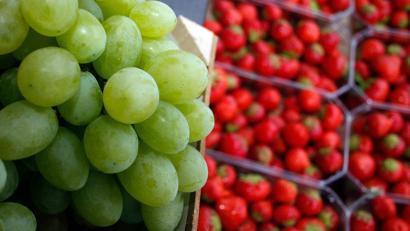 (TJVNEWS) Shocking video out of the Bronx shows sanitation workers throwing away carton after carton of fresh produce from a local vendor into garbage trucks as an outraged crowd protested the move.

Cruz told ABC 7 that two police officers called the sanitation department Thursday to remove her produce after she couldn’t provide a permit.

“When I saw the sanitation department…all the food. It made me so angry,” she said.

The New York City Department of Sanitation provided a statement defending its actions, saying the food needed to be thrown away “for the safety of the community.”

“This video shows a small portion of an unfortunate situation, where abandoned material needed to be disposed of for the safety of the community. The Department of Sanitation is committed to our mission of keeping streets and neighborhoods safe, clean, and healthy,” the department said.

But others say a Cruz is being “criminalized” simply for trying to make an honest living.

Instead of giving her the opportunity to formalize her business, get a permit, she is being criminalized,” said Carina Kaufman-Gutierrez of the Street Vendor Project.

Notably, the South Bronx has the highest food insecurity rate in the country, with 37% of residents food insecure due to high poverty and widespread unemployment due to COVID.