President Joe Biden has dubbed his presidential agenda “Build Back Better,” but instead of rebuilding America, he has so far only succeeded in building back the Taliban better with billions of dollars in American weaponry.

The billions of dollars in American taxpayer-funded military equipment are now in the hands of the Taliban, to use against Afghans who until last month were partnered with the U.S. government.

The Taliban is also using that equipment to quell the last bit of anti-Taliban resistance in the country.

And the equipment is somehow also falling into the hands of Iran, America’s top adversary in the region. An Iranian Telegram channel recently released images of U.S. military vehicles in Iran, according to the BBC.

According to the British-based Times, the vehicles included American tanks, Humvees and “MRAPs,” or Mine-Resistant Ambush Protected light armored vehicles that are resistant to roadside bombs.

The U.S. has spent nearly $84 billion dollars on training, equipping, and otherwise building the Afghan security forces between 2002 and 2018, according to a Government Accountability Office (GAO) report published on January 27, 2021.

That figure tracks closely with figures published by the Special Inspector General for Afghanistan Reconstruction (SIGAR) on July 30, 2021, which said cumulative appropriations for the Afghan Security Forces Fund stood at nearly $82.90 billion, with more than $76.19 billion having been obligated and more than $75.20 billion disbursed.

The U.S. also turned over at least 10 military facilities worth billions of dollars to the previous Afghan government, which are also now in the hands of the Taliban. Bagram Airfield, which was turned over to the now-defunct Afghan Ministry of Defense on July 1, 2021, was valued at $565,840,912, according to SIGAR.

A recent Sunday Times article graphic showed how much U.S. military equipment had been supplied to Afghan security forces, citing the GAO. 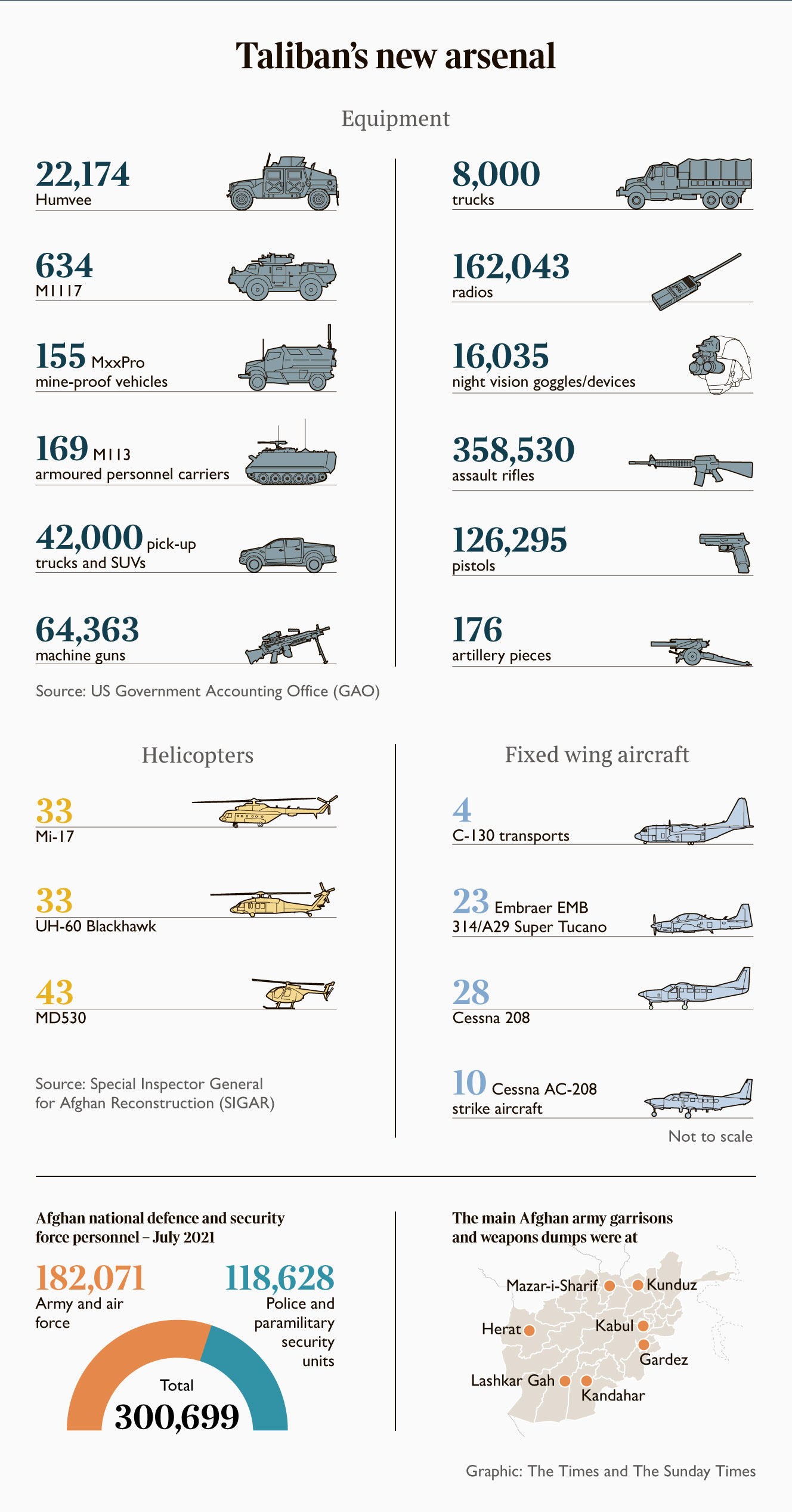 According to Oryx, the Taliban have captured at least 12 tanks; 51 armored fighting vehicles; 61 artillery and mortars; eight anti-aircraft guns; and 1,980 military trucks, vehicles, and Jeeps.

This list does not even include small arms, including M4 and M16 rifles, M24 sniper rifles, and M2 .50 caliber machine guns, nor does it include ammunition, communications equipment, night-vision goggles, or biometric devices used to identify Afghans who assisted Americans.

And the blog’s authors say their counts of equipment are based on photographic evidence only and not all Taliban members have high-end cell phones.

The White House has been vague about how much U.S. military equipment may have fallen into Taliban hands. National Security Adviser Jake Sullivan said at a White House briefing on August 17:

We don’t have a complete picture, obviously, of where every article of defense materials has gone. But certainly, a fair amount of it has fallen into the hands of the Taliban, and, obviously, we don’t have a sense that they are going to readily hand it over to us at the airport.

White House Press Secretary Jen Psaki became defensive when asked about leaving the Taliban with military equipment at a briefing on August 30. “Certainly our objective was not to leave them with any equipment but that is not always an option when you are looking to retrograde and move out of a war zone,” she said.

However, Democrats have resisted Republican efforts to find out how much equipment was left for the Taliban.

Rep. Nancy Mace (R-SC) proposed an amendment during a September 1 House Oversight Committee business meeting that would ask the Pentagon inspector general to figure out what and how much military equipment has been seized by the Taliban.

“The Taliban is now armed with significant resources, equipment, arms, artillery, helicopters, drones, weapons, ammunitions from the United States. You name it, they have it. We even gave the Taliban an air force in recent weeks,” she said, adding that reports of Iran buying equipment from the Taliban is “enormously problematic” and “does impact our national security.”

Retired Lt. Col. Oliver North said in a recent interview on Sirius XM’s Breitbart News Daily that the Taliban, Islamic State-Khorasan, and the Haqqani Network, would collectively become the “best armed criminal enterprise in the history of mankind” due to the haul left behind by the U.S.

He also predicted some of it will be sold to China and Russia and be reverse-engineered and used against the United States in other campaigns.

“What’s happening to a lot of it is that they’re being dragged across the border in Conex boxes and on trucks [to Pakistan],” he said.

“They’re going to be heading to the port where they will be loaded aboard a ship and taken to communist China for exploitation. That’s what’s happening to anywhere between five and ten of every piece of equipment. The Taliban, by the way, are getting rich on this. They’re selling them,” he said.

Even now, the equipment is being used to snuff out the anti-Taliban resistance in the Panjshir Valley — which had not even been overcome during the Russian occupation.

Times reporter Anthony Loyd reported that the Taliban — apart from using rifles, Humvees, and machine guns — are also using American handcuffs against resistance fighters. He wrote, after observing one prisoner:

I noticed too that his hands were secured behind his back with American handcuffs. The fact that his wrists were bonded by steel etched with the words Peerless Handcuff Company Springfield MA seemed somehow more grotesque than any other detail beneath the angry blue of the late summer sky as the last pocket of defiance to Taliban rule in Afghanistan was extinguished.

Donald Trump Jr. quipped in a tweet on Tuesday, “The only thing Joe Biden ‘Built back better’ was the Taliban.”

US Military Says It Killed Al-Qaida Leader In Drone Strike

Erdogan orders removal of 10 ambassadors, including US envoy