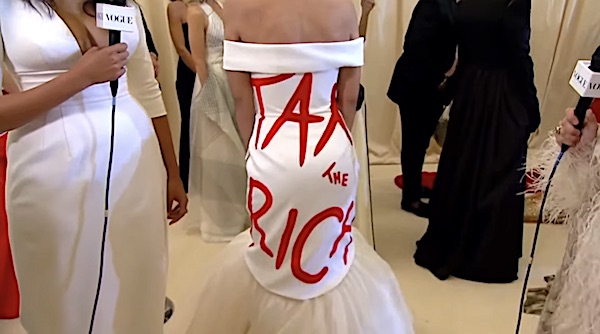 Ocasio-Cortez, a noted Tesla owner, “borrowed” a custom-made “tax the rich” gown provided by designer brand Brother Vellies for the pompous event. The Democrat also accepted shoes, fine jewelry, and services from professional hair and makeup artists for the outing, she revealed on social media. According to the Foundation for Accountability and Civic Trust, an ethics watchdog group, the items constitute a violation of the House’s “gift rule.”

“The gift rule for members of Congress is very clear and is in place for good reason. Members simply cannot accept anything of value that isn’t on the short list of permitted items,” FACT executive director Kendra Arnold said in a statement. “This is a case where the member’s own words should trigger an investigation—not only did she state that she did not pay for an item, she also implied that she was given the ticket because of her ‘responsibilities in overseeing’ the gift-giver. This entire situation is exactly what the House’s gift rule is designed to prevent.”

Under House ethics rules, a gift that is not based on a “personal friendship” must not exceed $50. If a gift is provided “on the basis of a personal friendship,” it “must be under $250.” In addition to Ocasio-Cortez’s custom dress—which is reportedly valued at “hundreds of thousands of dollars”— jewelry company Mejuri gave the Democrat $515 worth of free bling. Ocasio-Cortez also used a pair of shoes—valued at $614—from the same company that provided her gown.

“The use of these tangible items and services has value and it does not appear that any of the exceptions to the gift rule would apply,” FACT’s complaint states. “It does not matter whether the items were ‘borrowed’—the use of an item confers a benefit upon the member that is a gift under the ethics rules. Specifically, the ethics rules provide that any tangible item is a gift if it is used.”

House ethics rules allow members to attend a charity event for free, but they must receive an invite directly from the event’s organizer. While Ocasio-Cortez received her tickets from the Metropolitan Museum of Art, the gala is organized by fashion media company Condé Nast, with global chief content officer Anna Wintour personally approving all invitations. Ocasio-Cortez sat at Wintour’s table, according to the New York Times.

For Arnold, the unclear invitation process should prompt an investigation.

“In the present case, it is not entirely clear how the invitations process worked,” Arnold wrote in FACT’s complaint. “While the event is held to benefit the Metropolitan Museum of Art, it is organized by a for-profit company, Condé Nast, and all invitations must be approved by a single individual, Anna Wintour. Therefore, the Office of Congressional Ethics should investigate to determine whether both of the qualifications for a charitable event exception were met.”

Trump media partner says it has lined up $1B in capital