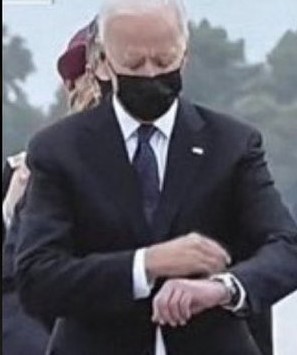 The US president met the Israeli prime minister on Friday, with their conversation focusing on the two countries’ “historic partnership”, COVID cooperation, and the supposed “threat” to Israel and the Middle East “posed by Iran”.

“Sleepy Joe” trended on Twitter in the United States over the past 24 hours over a video showing US President Joe Biden looking like he’s literally fallen asleep during a conversation with Israeli Prime Minister Naftali Bennet during the latter’s Friday visit to the White House.

The viral footage, captured by CSPAN and other media and shared countless times, features a masked, almost completely motionless, Biden clasping his hands and slumped over with his eyes shut for nearly 30 seconds as Bennett drones on about writing “another chapter in the beautiful story of the friendship between our two nations”

Meanwhile at Dover Air Force Base in Deleware:  AP reported:In hushed reverence, President Joe Biden stood witness with grieving families Sunday under a gray sky as, one by one, the remains of 13 U.S. troops killed in the Kabul suicide bombing were removed with solemnity from a military aircraft that brought them home.

Minutes into the event social media exploded, pointing to a moment where Joe Biden appears to be checking his watch, during the ceremony:

Biden appears to check his watch during the dignified transfer ceremony at Dover Air Force Base. pic.twitter.com/oMsBefnmfS

I’m sorry. Are we inconveniencing you? pic.twitter.com/LcNAcF9gLE