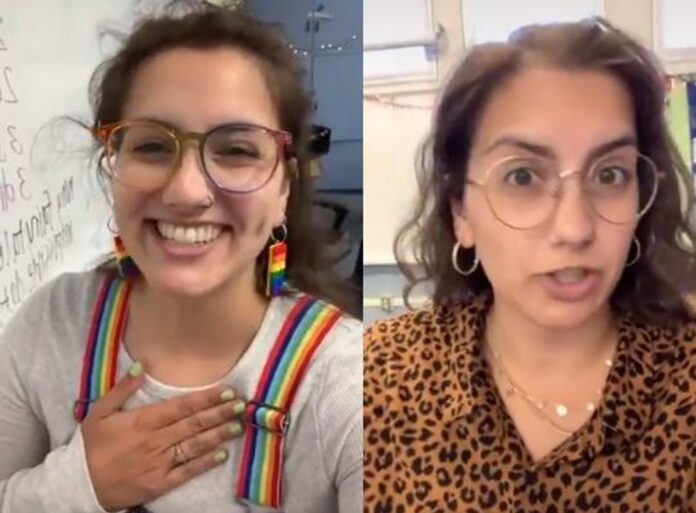 A school district in California is investigating a teacher who posted a video urging her students to pledge allegiance to the gay pride flag, Fox News reported Saturday.

Pitzen said her students decided to stand up but not say the words, which she claimed was fine, “Except for the fact that my room does not have a flag. It used to be there,” she explained, pointing to a wall behind her:

Teacher mocks the American Flag and suggests to students they can say the Pledge of Allegiance to the pride flag: pic.twitter.com/1QTS5xjPln

“But I took it down during Covid because it made me uncomfortable, and I packed it away and I don’t know where and I haven’t found it yet,” she added, laughing.

Pitzen said a student told her it was “weird” they stood and said it to nothing, then claimed she told the student she was trying to find the flag.

“In the meantime, I tell this kid, ‘We do have a flag in the class that you can pledge your allegiance to,’ and he like, looks around and he goes, ‘Oh, that one?’” she said, pointing to the pride flag.

The school district told Fox News on Saturday the incident was being investigated but did not offer additional details because it did not “discuss employee related matters.”

The district also addressed the issue in a Twitter post, writing, “A personal post by a teacher about the American flag is causing alarm/concern. Respecting our flag is a value we instill in students and is an expectation of our staff.”

“We take this matter with extreme seriousness and are investigating and addressing it,” it continued:

Numerous Twitter users replied to the district’s post, one person writing, “I would hope that this sort of anti-patriotic indoctrination would be frowned upon, particularly considering the tax dollars that pay for such atrocious and unprofessional behavior.”

“If a teacher went all MAGA politically, we’d no doubt see some action taken. No less should be expected here,” another replied.