The Last Crazy Jew of Afghanistan 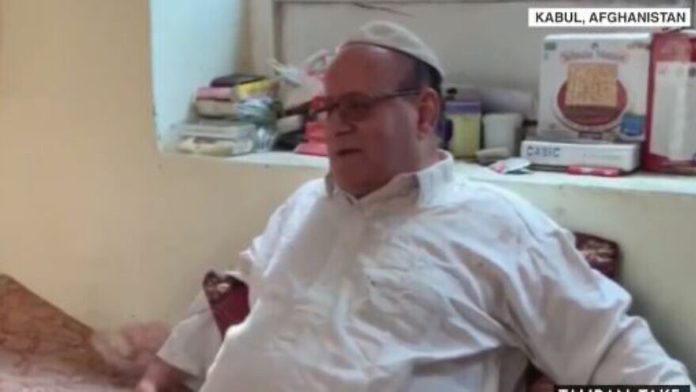 As the United States rushes to evacuate its owns citizens from Afghanistan and others who helped US forces over the last 20 years, in light of the Taliban takeover, it appears that at least one person has no intention of leaving.

The New York Post has reported that there in one remaining in Kabul and according to many people involved in an international effort to rescue him, he has decided to stay put in the country that he has lived in all of his life.

Zebulon Simantov, 62, calls Kabul his home and lives in the very last synagogue remaining in Afghanistan, as was reported by the NY Post. The paper reported that according to previous media reports Simantov has owned a restaurant and was a carpet dealer in the western city of Heart from where he hails.

According to a recent JTA report, Simantov has said that he had previously been imprisoned by the Taliban during their last hold on power in Afghanistan and that they tried to convert him as they perceived him as an infidel. JTA also reported that for decades, Simantov has refused to give his wife a get (bill of Jewish divorce). She left Afghanistan with their two daughters in the late 1990s for Israel. They now live in Holon, near Tel Aviv.

“He really liked alcohol, and used to insist journalists who wanted to interview him bring him some,“ said  Amie-Ferris-Rotman, a British-Jewish journalist who had previously worked in Afghanistan and spoke to the JTA.

The wire service reported that Israeli media believe that Simantov’s refusal to leave Afghanistan is because he wants to circumvent his obligation to give his wife a get and does not want to deal with rabbinic authorities.

Coming to Simantov’s rescue now that the Taliban has once again taken hold of power in Afghanistan was Moti Kahana, an American-Israeli businessman, according to the NY Post report.  Operating a private security company, Kahana was instrumental in helping to evacuate the Jews that remained in Syria in 2014 and is currently involved in other rescue projects around Afghanistan.

As of Tuesday, Simantov had agreed to leave his native country but then reversed his decision when finding out that no money will be coming his way.

Kahana told the Post at on Tuesday he had gone to Simantov’s house and that he was packing to leave. He then suddenly turned tail and “demanded  $50,000 a condition of his departure and thwarting the plan.

Speaking to the Post, Kahana said: “I don’t pay people to save their life.”

“I dealt with so many crazy people and he is on the top of the list,” Kahana, 53, told The Post, saying the curmudgeonly Semite vacillated until the end.

Chitrik also told that Post that “he did not say why, but he is quite comfortable over there.”

Chitrik said that his Istanbul base organization has been in touch with Simantov for years and has helped supply him with Matzo and other religious necessities, according to the Post report.

Back in June of this year, Simantov has indicated a very strong interest in leaving Afghanistan and heading to Israel. He told Voice of America that he didn’t have the stomach for living a life under the draconian rule of the mullahs in his country.

Simantov gained the status of being the only Jew in Afghanistan after the death of Yitzchak Levy in 2005, according to the Post report. Simantov and Levy harbored severe animus towards one another even though they both lived in the same synagogue. They cursed each other on a regular basis and even reported one another to the Taliban; claiming the other was involved in criminal behavior. They even served a jail term together in which the constant fighting continued.