Anyone claiming the Hamptons is done is sorely mistaken. While reports abounded of people fleeing early in the summer due to large crowds I have witnessed the opposite. Starting prices at low end hotels are $1,500 a night and they are in short supply. Even weekdays are sold out at $900 and the prices keep rising. As the pandemic rages globally the safest place to ensconce oneself is on the South Fork-and in the past year and a half the Hamptons has been largely spared from the ravages of the pandemic. An undeniable result of the Hamptons hordes is Hampton hoarding as grocery stores such as Citarella and Stop & Shop are frequently out of produce. Want an appointment at 27 Hampton Salon you better call a week in advance or you are out of luck. I have seen people refused entry on the Jitney despite having pre-booked a $44 seat. And there are no signs of the Hamptons frenzy abating as prices were up 40 percent on houses from the already skyrocketing prices of last year. The pandemic made people realize that settling in this enclave might be a viable alternative to New York for a large portion of the year. The wealth in the Hamptons is unparalleled; with a lifeguard recently recounting giving swimming lessons in a home in the Hamptons which contained three pools and a trainer telling of a client offering any sum if she took up residence with an exercise starved family. These are the Lifestyles of the Rich and Uber Rich as Vanity Fair recounted the one-percenters feeling poor compared to their much richer new neighbors. Despite the vast riches of its inhabitants the Hamptons crowd is one of the most underdressed, unassuming bunch as they peruse town in flip flops, sweatpants and crappy cars-this is not Rodeo Drive. And yet pop-up stores such as Valentino in Southampton and Gucci in East Hampton realized the importance of getting these eyeballs on their products even if actual purchases are scant.
This past weekend August 20th I headed to the Hamptons ready to embark on one of the last socially packed weekends. My first stop being The Stephen Talkhouse-a treasure in Amagansett. For a $20 cover you can enjoy the tunes of a fabulous cover band and get bumped into by some very drunk Hamptonites. When I arrived the first person I saw was the magnificent Mara Siegler, a top Page Six reporter and a legend in journalistic circles. “Hey,” she casually remarked, “you just missed the Dave Matthews band.” “Great,” I mumbled, yet I was still excited to be out and about at 2 am on a Thursday night. The Talkhouse is a Hampton’s treasure frequented by Paul McCartney, Chris Martin, and other music legends. Did I mention McCartney had a party in the Hamptons Thursday night which I unfortunately didn’t get an invitation to-but Jimmy Fallon, Chris Martin, and Bon Jovi did. Hey, they are neighbors! 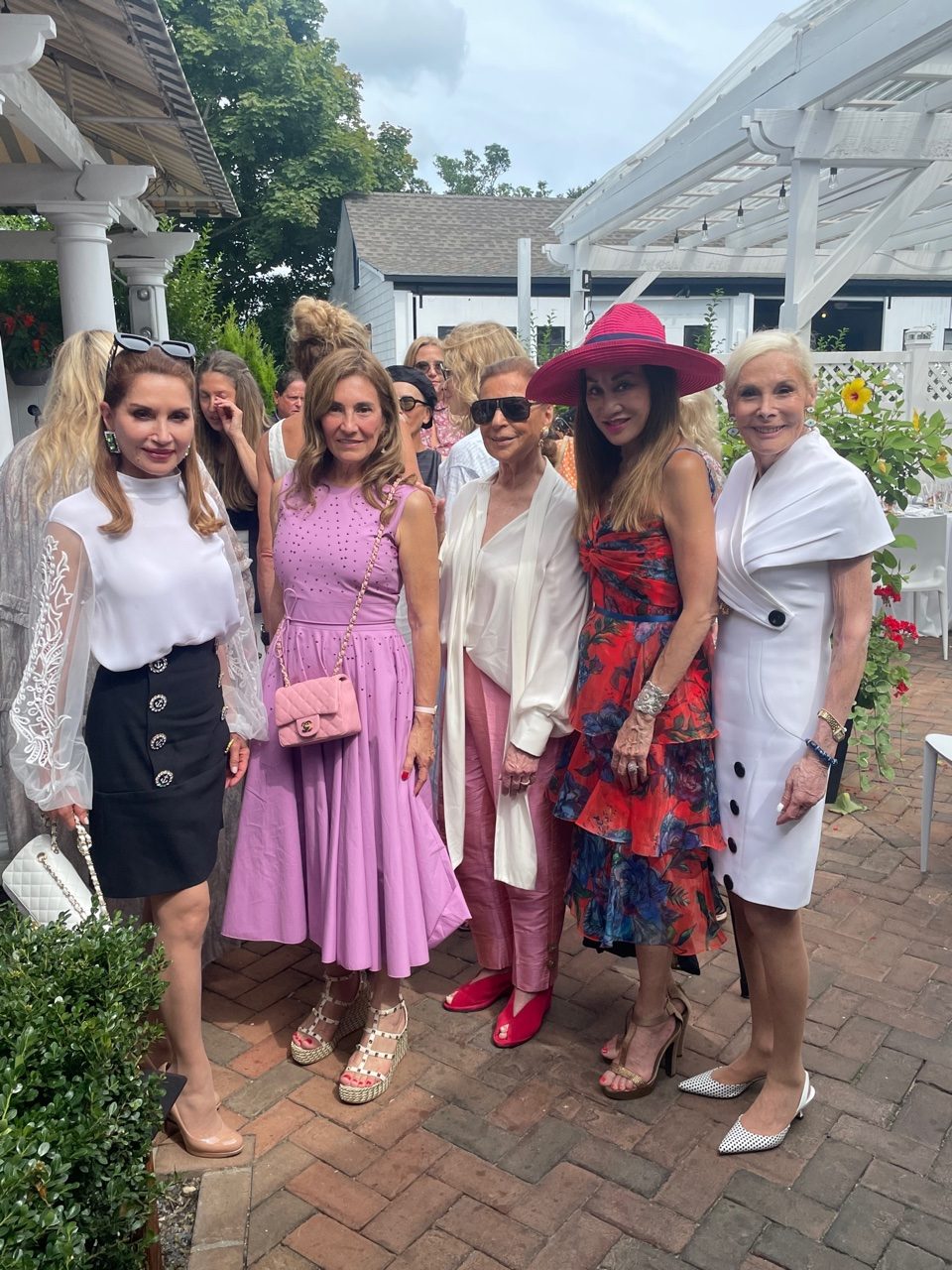 The Hamptons nightlife this summer is literally kicking with venues such as Southampton Social Club, Blu Mar, and anything in Montauk reporting record crowds. Despite a late evening the prior night, on Friday I headed to the Waxman Cancer luncheon where $300 got you a delectable meal of chicken or salmon at T-Bar Southampton, a day of socialization with 125 of the most elegant women in the Hamptons and a fashion show by famed Israeli designer Kobi Halperin.

The Waxmans honored philanthropist Jean Shafiroff and she was dazzling in a Kobi Halperin blouse and Dolce skirt. Jean is the “first lady of the Hamptons” appearing on the cover of last weeks “Social Life” magazine and hosting two to three events a week. On Friday night, much of the same crew headed to “The Muses” venue in Southampton for the first ever Angel Ball in the Hamptons. Russian born socialite and philanthropist Janna Bullock, dazzled at the ball in a Frederick Anderson gown, after opening up her Meadow Lane mansion for an Angel Ball luncheon days earlier. Janna exudes effortless class as she entertains frequently at her Hamptons and Florida homes.

Due to Covid, the Angel Ball switched the venue from Cipriani in October to the Hamptons in August. Celebrating its 25th year 440 of New York’s finest paid $1,500 a ticket to the sold-out event.  I have a dozen friends who tried to gain entry weeks ago but were refused. A problem with the summer season in the Hamptons is after spending $200 on the perfect hairstyle an hour later most attendees, myself included, look like they never saw a hairbrush or blow dryer.

The Ball was light on celebrities with LL Cool J dominating the cocktail hour along with Russell Simmons and titans David Rosenberg and Howard Lorber-unfortunately co-chair Mary J. Blige was a no-show. To date the foundation has raised more than $38 million to over 300 researchers. At its conclusion, the Angel Ball welcomed regulars Flo Rida and DJ Cassidy who entertained the masses with an electrifying energy. For the first time ever, Flo Rida called the men on stage to join him for some revelry as the women patiently waited in the wings.

Saturday proved no less exciting as Rudy Giuliani held an event at Capri Southampton with Bill O’Reilly and other fellow Republicans. An hour later the indefatigable Jean Shafiroff hosted the Animal Shelter Gala in a tent at Southampton’s Pond Lane. Shafiroff, joined by Stephen Baldwin and her daughters, looked resplendent in a green gown as the crowd danced and partied with abandon, while others already headed home to avert the impending hurricane. As I rushed in an uber to head back to New York I later learned the Hamptons was largely spared the ravages of Henri-with just a few hours of rain-manifesting how privileged the privileged really are.