Yesterday as planned, pro-Israel online activists and organizations from around the world created a social media storm criticizing Ben & Jerry’s’ decision to boycott Israelis living in Judea and Samaria.

And it has already produced results, being one of the highest trending topics on Twitter in Israel 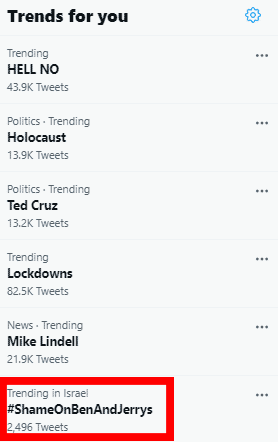 as well as eliciting this response from Anuradha Mittal, the anti-Zionist-not-antisemite Ben & Jerry’s board member who pushed not only for the announced decision but actually a boycott of all of Israel:

Of course, a better result would be a reversal of the decision itself, and this might still occur with all the pressure mounting. But pissing off Mittal is perhaps a bronze medal result; not only is she feeling the pressure, but her hypocrisy is there for all to see.

Organized campaigns meant to bully, intimidate, spread lies & hatred WILL NOT DETER the struggle for human rights & dignity for all.

What is the epitome of such an “organized campaign meant to bully, intimidate, spread lies & hatred”?