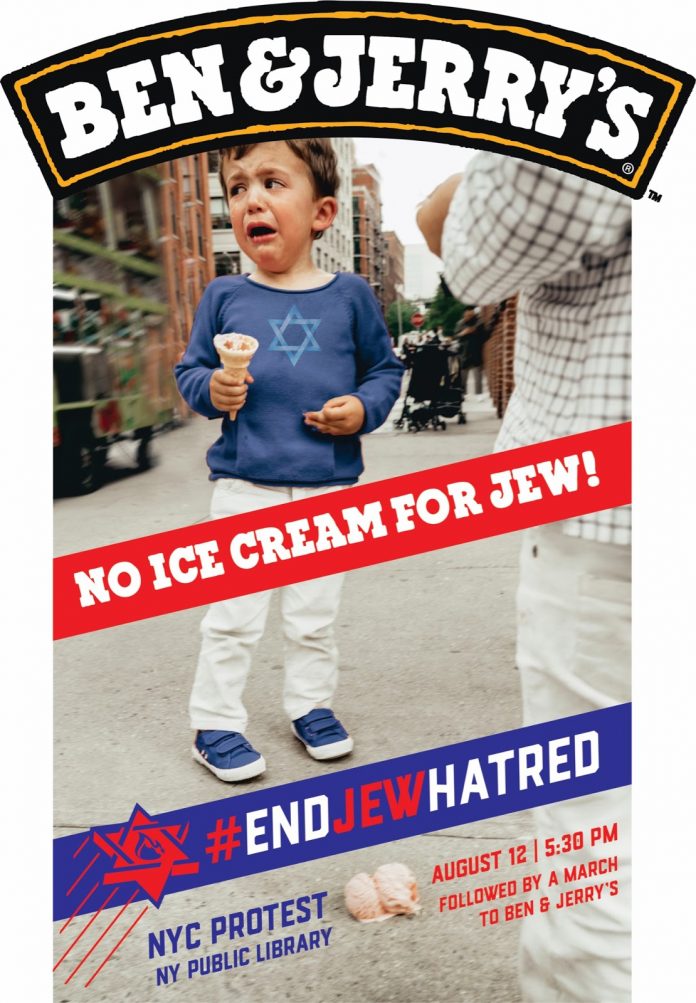 The event will have private security and NYPD presence.

In the wake of Ben & Jerry’s racist decision to stop selling ice cream in Israel, elected officials, religious leaders, and community advocates are holding a protest to #EndJewHatred at Ben & Jerry’s, and to oppose antisemitic and illegal commercial boycotts against Jewish people and the Jewish state. The protest comes as officials in at least 5 states – Texas, Florida, New York, New Jersey, and Illinois – express their deep concern and intentions to evaluate whether to divest their public pension funds from Ben & Jerry’s parent company, Unilever. Local NYC institutions, such as Morton Williams and Gristedes have reduced their offerings of Ben & Jerry’s products in New York.

Ben & Jerry’s illegal boycott is the biggest act of corporate antisemitism since Airbnb – which ended up settling multiple lawsuits and reversing its discriminatory policy. Ben & Jerry’s act creates an atmosphere where Jew-hatred is legitimized, and emboldens violence against Jews. Just this past weekend, mobs demanding global violence against Jews took to the streets of Brooklyn. This is a consequence of normalizing Jew-hatred, which is what Ben & Jerry’s is doing.

Activists and community leaders will hand out free ice cream and educational materials about the dangerous movement to boycott Jewish people [the so-called Boycott, Divestment and Sanctions (BDS) movement] and call for a “week of action” at Ben & Jerry’s stores and properties around the world. Protestors will then march to Ben & Jerry’s and receive free ice-cream from its competitors who don’t engage in Jew-hatred and discrimination.

Elected officials including Assemblymember Daniel Rosenthal, Assemblymember Simcha Eichenstein, Councilmember Kalman Yeger, Rabbi Shlomo Litvin, and a coalition of numerous Jewish community organizations join the #EndJewHatred movement in calling for a boycott of Ben & Jerry’s and complete State divestment from its parent company Unilever, unless Unilever reverses its bigoted and discriminatory decision. The #EndJewHatred movement is mobilizing thousands of activists, starting with a major protest on August 12th in New York City to end racism in corporate policies.

Morton Williams Supermarkets, which decided to severely curb its sales and marketing of Ben & Jerry ice cream and is actively supporting our cause, is graciously providing the water bottles we will have available at the event.
‍
Come to the New York Public Library on August 12th at 5:30 PM to protest Ben & Jerry’s.