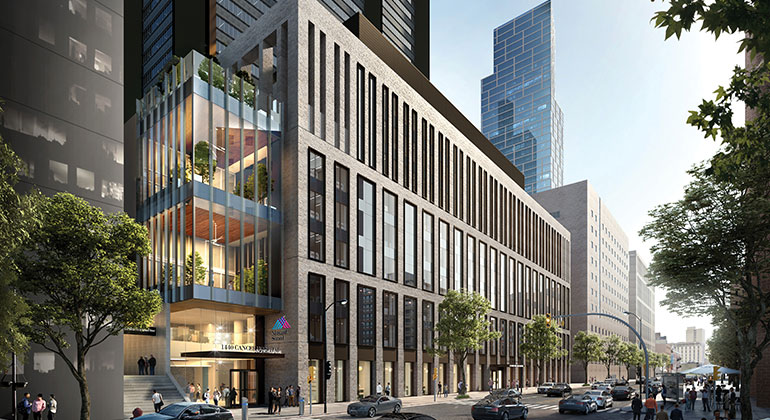 Is Your Gas Stove Making You Sick?  Experts Weigh In

Signaling a watershed moment for cancer care in the New York region, the Mount Sinai Health System today announced a game-changing $60 million gift from James S. and Merryl H. Tisch to establish the Mount Sinai Tisch Cancer Center.  This gift will support the construction of a modern, state-of-the-art cancer hospital at the Mount Sinai Hospital campus. The Center will broaden access to breakthrough therapies, diagnostics, and clinical trials and will further Mount Sinai’s mission to provide advanced, personalized treatment and holistic care for patients in all communities. This is the largest gift received by the Mount Sinai Health System for a cancer initiative.

In 2008, a $40 million gift from the family established The Tisch Cancer Institute, which has made advancements in cancer research across basic science, clinical care, and population health.

“Our gift to Mount Sinai more than 13 years ago to create The Tisch Cancer Institute was a result of our family’s passion and commitment to saving lives and advancing the health of all patients battling this chronic disease,” said James S. Tisch, Co-Chairman of the Boards of Trustees of the Mount Sinai Health System. “We have one of the largest and most respected Myeloma programs in the country, and have seen enormous growth in our cancer programs and footprint. We believe that this new gift will transform cancer care and expand access to life-saving breakthroughs, enhancing Mount Sinai’s leadership in cancer treatment and research,” stated Mr. Tisch.

The new Tisch Cancer Hospital, located at 1440 Madison Avenue, will consist of four floors with approximately 20 single-bed rooms on each floor. There will also be a series of innovative clinical spaces designed to ease transitions between various stages of treatment. The hospital is expected to be completed by 2025.

“We are so grateful to Jim and Merryl for their continued and outstanding support of Mount Sinai, and we are deeply honored that the new hospital will bear the Tisch name,” says Kenneth L. Davis, MD, President and Chief Executive Officer of Mount Sinai Health System.  “Their ongoing generosity helps us elevate the level of cancer care all patients receive at Mount Sinai.”

The Mount Sinai Tisch Cancer Center will include the Tisch Cancer Hospital, The Tisch Cancer Institute at Icahn Mount Sinai (a National Cancer Institute designated cancer center which is the highest federal rating for a cancer center), several Cancer Centers of Excellence, and a growing ambulatory cancer network. Patients will have access to more than 250 oncologists, top-tier surgeons, and researchers working side-by-side throughout the New York metropolitan area, as well a full range of comprehensive medical services provided by one of the highest ranked hospitals in New York City and nationally.

“This donation has strengthened our ability to deliver the utmost in cancer research and clinical excellence. We are charting a new course, finding new paths to early detection,  and will eventually eradicate this disease so no family has to experience the loss of a loved one to cancer,” says Dennis S. Charney, Anne and Joel Ehrenkranz Dean of Icahn Mount Sinai and President for Academic Affairs at the Mount Sinai Health System. “We are grateful to Jim and Merryl. This gift will have an impact for generations to come.”

“This hospital and center represents a steadfast commitment to provide life-saving and high-quality cancer care for our patients and community,” said Luis Isola, MD, Director of Cancer Clinical Programs and Medical Director of Mount Sinai Cancer Network. “Our patients will have streamlined access to care from outstanding oncologists and specialists in a broad array of specialties. Once completed, it will be a model for 21st century cancer care. We thank the Tisch family for their generous support.”

The Tisch Cancer Institute, established in 2008 through a gift by the Tisch Family, today has more than 80 prominent scientists and physicians working to develop innovative and translational research programs in cancer immunology, molecular mechanisms, and prevention and control. The work accomplished at the Tisch Cancer Institute continues to build upon Mount Sinai’s history of revolutionary medical discoveries and outstanding patient care.

About the Mount Sinai Health System

The Mount Sinai Health System is New York City’s largest academic medical system, encompassing eight hospitals, a leading medical school, and a vast network of ambulatory practices throughout the greater New York region. We advance medicine and health through unrivaled education and translational research and discovery to deliver care that is the safest, highest-quality, most accessible and equitable, and the best value of any health system in the nation. The Health System includes approximately 7,300 primary and specialty care physicians; 13 free-standing joint-venture centers; more than 410 ambulatory practices throughout the five boroughs of New York City, Westchester, and Long Island; and more than 30 affiliated community health centers.

New York Eye and Ear Infirmary of Mount Sinai is ranked among the Top 20 nationally for ophthalmology. The Icahn School of Medicine at Mount Sinai is one of three medical schools that have earned distinction by multiple indicators: ranked in the top 20 by U.S. News & World Report’s “Best Medical Schools,” aligned with a U.S. News & World Report “Honor Roll” Hospital, and No. 14 in the nation for National Institutes of Health funding. Newsweek’s “The World’s Best Smart Hospitals” ranks The Mount Sinai Hospital as No. 1 in New York and top five globally, and Mount Sinai Morningside as top 20 globally, and “The World’s Best Specialized Hospitals” ranks Mount Sinai Heart as No. 1 in New York and No. 5 globally and the Division of Gastroenterology as No. 5 globally. For more information, visit https://www.mountsinai.org or find Mount Sinai on Facebook, Twitter and YouTube.