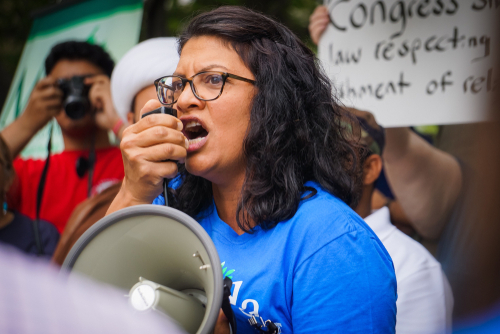 On Tuesday, Anti-Defamation League CEO Jonathan Greenblatt criticized as a “dog whistle” remarks from US Representative Rashida Tlaib (D-MI) alleging that unspecified individuals were profiting by opposing both the Palestinian cause and domestic US policies like health care reform.

Appearing during a virtual event on Monday as the opening speaker of the Democratic Socialists of America (DSA) 2021 National Convention, Rep. Tlaib connected issues in her home city of Detroit with her Palestinian background.

“As I think about my family in Palestine, that continue to live under military occupation and how that really interacts with this beautiful Black city I grew up in, you know I always tell people cutting people off from water is violence, and they do it from Gaza to Detroit,” she said. “And it’s a way to control people, to oppress people. And it’s those structures that we continue to fight against.”

Tlaib, a DSA member, continued, “I know you all understand the structure we’ve been living under right now is designed by those that exploit the rest of us, for their own profit … I don’t care if it’s the issue around global human rights and our fight to free Palestine, or to pushing back against those that don’t believe in the minimum wage or those that believe that people have a right to health care, and so much more.”

“And I tell people: those same people, if you open the curtain and look behind the curtain, it’s the same people that make money, and yes they do — off of racism, off of these broken policies, there is someone there making money,” Tlaib added. “And you saw it, it was so exposed during the pandemic, because all those structures, everything that was set up, they made record profit, when we were all having some of the most challenging, most difficult times in our lifetime.”

On Tuesday, Greenblatt commented on Twitter that Tlaib’s remarks were “stunning.”

“We’ve heard this kind of ugly antisemitic dog whistling before, but it’s appalling when it comes from a member of Congress,” Greenblatt said.