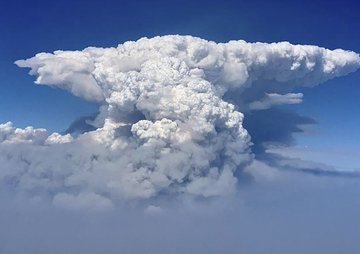 Strong winds blew the smoke from fires in Oregon, California, Montana and Idaho, bringing ash and haze into the air in stacks up to six miles high, the Associated Press reported.

The smoke has caused air quality to remain in the unhealthy range throughout the East Coast, and the haze continues to move south, according to The New York Times.

These particles that are released into the air during a fire can be dangerous, increasing the risk of asthma attacks, heart attacks and strokes, French said.

People should avoid strenuous activities, and going outside, Róisín Commane, an atmospheric scientist at Columbia University told the New York Times. She also encourages wearing masks for those who cannot stay inside.

“A lot of the masks people have been wearing for coronavirus are designed to capture PM2.5,” Commane said.

There are more than 80 fires active across 13 U.S. states, burning over 1 million acres, according to the New York Times.

“We’re seeing lots of fires producing a tremendous amount of smoke, and … by the time that smoke get to the eastern portion of the country where it’s usually thinned out, there’s just so much smoke in the atmosphere from all these fires that it’s still pretty thick,” David Lawrence, a meteorologist with National Weather Service, told the AP.

The Bootleg fire in Oregon is the largest fire in the U.S., and has burned 394,407 acres and is 32% contained, according to the latest official fire report.

Oregon’s Bootleg Fire has burned an area larger than NYC and officials do not expect it to be fully contained until November.

The fire can now generate its own weather, including “fire clouds” that spark lightning.

The fire is so large that it has caused lightning, altered winds and released extreme amounts of smoke, according to the New York Times.

There are over 2,000 firefighters battling the Bootleg fire, which has burned about 75 homes and other structures, according to the New York Times.  There have not been any reported injuries due to the fire. Fires have also grown in California, where the Tamarack Fire has burned 39,045 with no containment, according to the latest official fire report.