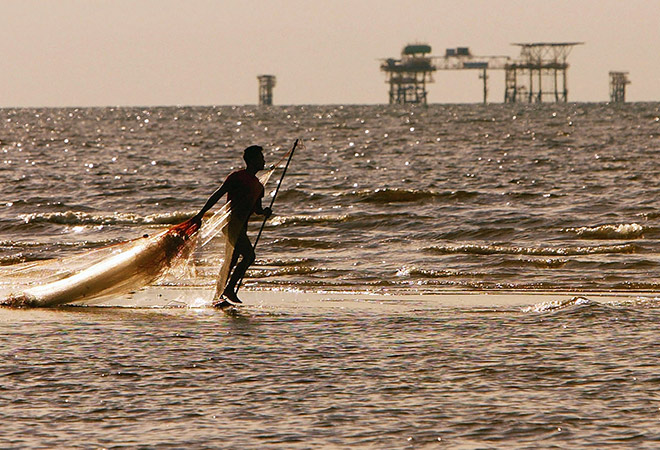 Communist countries are renowned for their pollution, but China is taking it to a new level.

Here’s their latest, which comes of their expansion into the South China Sea, according to WION of India:

Swarms of Chinese vessels have dumped human waste and wastewater for years in a disputed area of the South China Sea, causing algae blooms that have damaged coral reefs and threatened fish in an unfolding catastrophe, a US-based expert said Monday.

Satellite images over the last five years show how human waste, sewage and wastewater have accumulated and caused algae in a cluster of reefs in the Spratlys region where hundreds of Chinese fishing ships have anchored in batches, said Liz Derr, who heads Simularity Inc, a software company creating artificial intelligence technologies for satellite imagery analysis.

Which is disgusting. How’d you like to be a little sea creature and get that rained down? What does a coral reef look like after the ChiComs have dropped their dumps onto them? What’s more, it’s not just the open sea seeing this, it’s pollution affecting nations in the region. The Philippines, which is known for its pristine beaches, has reportedly ordered its military to investigate.

The important point here is that China doesn’t belong there. According to Reuters:

China maintains a constant presence of coastguard and fishing boats in the South China Sea to assert its claim of sovereignty, including hundreds in the Spratly islands, where the Philippines, Brunei, Taiwan, Vietnam and Malaysia also have claims.
Simularity, an AI-based satellite image analysis firm, on Monday released public satellite images over a five-year period that it said showed damage caused by untreated human waste from Chinese vessels.

It hangs out in this region to intimidate its neighbors and assert dominance. It certainly doesn’t belong there, and all its territorial claims are fake.

Its particular aim is not just to beat up Vietnam, the Philippines, and Taiwan, but to chase out the Great White Fleet of the U.S. Navy, which at least until China started muscling in, kept the sea lanes open and enabled the smaller Asian nations of Southeast Asia to develop and grow prosperous. China’s presence already is a baleful one in the region of the South China Sea. It’s built illegal atolls. It’s had its fishing ships spy on other nations. It’s attacked boats of Vietnam and the Philippines in the past, and certainly caused trouble for the U.S. Navy.

Now we learn it’s brought its communist environmental practices to what had otherwise been a pristine region, turning it into their personal toilet.

Out on Twitter, this Twitter user, who appears knowledgeable, brought up that it’s a violation of China’s own signed treaties:

‘“China, stop shitting on the Spratlys,” Derr said.’ More than that in fact, Beijing shits on UNCLOS with its continued blatant disregard for the 2016 arbitral award. https://t.co/Np0AiX6GYz

Are these sea thugs who don’t belong there going to be made to clean this up? Where are the Sea Shepherds? Where is Greenpeace? Given the damage, it seems like a project that could keep the environmentalist groups legitimately busy. But we don’t hear much, at least not now. Somehow, nobody wants to challenge the Chicoms, quite possibly based on all the money they give to NGOs.  At least Joe Biden could speak up, yet thus far, he doesn’t. He’s too busy yoking the U.S. to the Paris climate deal instead of stopping 100% legitimate cases of bona fide pollution of the grossest sort from China.

When is China going to be called to the carpet for this disgusting practice now hitting many Asian neighbors?  Their record on pollution should be an object of universal scorn and shame. China demands that the U.S. adhere to the Paris accord. while it sits on its hands as a ‘developing nation.’ But with this stuff going on, with very real damage to the environment before our eyes, its hypocrisy is blatant.

For the left, if China does it, it can’t be a problem

New Warning Against Believing the Taliban has Turned ‘Moderate’