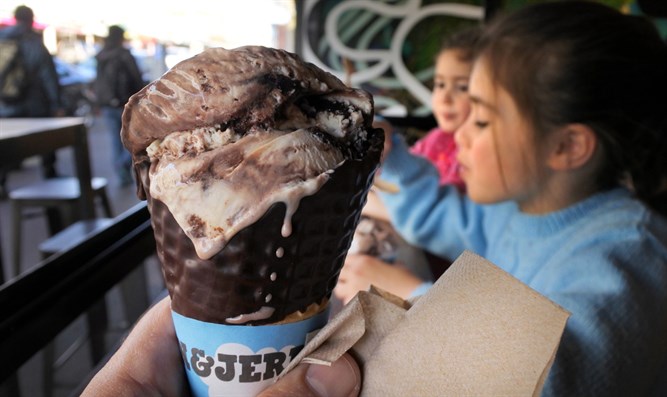 (Arutz Sheva Staff)The Town of Hempstead, Long Island, on Wednesday announced a move to cut ties and municipal contracts with Ben & Jerry’s and its parent company, Unilever, following the announcement that Ben & Jerry’s will no longer sell its ice cream in Israeli communities in Judea and Samaria.

“At the Town of Hempstead, we stand with our Jewish neighbors against anti-Semitism and maintain a strong stance against the Boycott, Divestment and Sanctions (BDS) Movement,” wrote Hempstead Council member Bruce Blakeman.

“In fact, we were the first municipality in our region to adopt anti-BDS legislation, targeting the BDS movement that attempts to isolate Israel and other U.S. allies from the international community. Indeed, this law prohibits town government from doing business with individuals or companies that openly boycott against America, Israel and other allies,” he added.

“Unfortunately, recent actions by Ben and Jerry’s to support the BDS movement have revealed the company’s anti-Israel stance,” wrote Blakeman, who added that local officials will announce on Thursday morning their action to direct all Town of Hempstead commissioners to cease any contracts and municipal business with Ben and Jerry’s and Unilever.

“At the Town of Hempstead, we will continue to work only with those who reject acts of hate and economic hostility,” he wrote, stressing, “We stand with Israel and our Jewish community.”

While the global Ben & Jerry’s corporation announced it would no longer sell its products in Judea and Samaria, it currently is incapable of carrying out that boycott.

Ben & Jerry’s ice cream in Israel is produced by an Israeli company, also named Ben & Jerry’s, which is licensed to produce the sweet dessert. This Israeli company, which operates out of Be’er Tuvia, is not boycotting any part of Israel. Their license only expires at the end of 2022.

Until then, Jews living in Judea and Samaria will continue to find Ben & Jerry’s ice cream in their stores.

On Tuesday, Prime Minister Naftali Bennett spoke with Alan Jope, the CEO of Ben & Jerry’s parent company, Unilever, telling him that Israel views the boycott as a clear anti-Israel step.

“As far as the State of Israel is concerned, this move will have serious repercussions, both legal and otherwise, and Israel will act aggressively against any effort to boycott its citizens,” Bennett told Jope.

The call took place after Israel’s ambassador to the United States urged the governors of 35 states to activate their respective states’ anti-BDS laws against Ben & Jerry’s.

“In addition to the great moral difficulties that derive from such a boycott, Ben & Jerry’s announced policy seems to also trigger potential legal ramifications, based on laws legislated by over 35 States, including your state, meant to counter these types of hate driven boycotts,” Ambassador Gilad Erdan wrote to the governors.