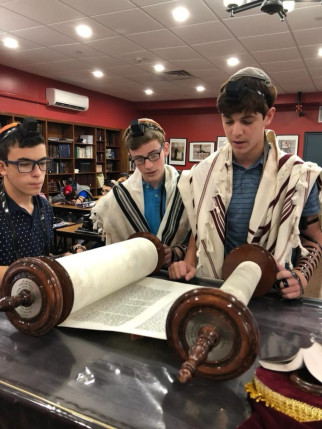 While stories abound about young Jewish prodigies in the academic arena including science, math, engineering and business among other fields of intellectual rigor, very few stories are told of young Jews entering professional sports. Now, that myth of Jewish inability to perform on the diamond or on the grid iron is about to be shattered.

According to recently published story in the New York Post, a 17-year old Woodmere, Long Island native named Jacob Steinmetz has just landed himself a baseball scholarship at Fordham University. Moreover, there may be lucrative contracts coming his way in this week’s Major League Baseball draft.

Steinmetz stands at six feet, six inches and packs a 97 mph fastball as a formidable pitcher, the likes of which have not been seen for a while. Besides which, Steinmetz is a practicing Orthodox Jew who strictly observes Shabbat and the scrupulously adheres to the laws of kashruth (keeping kosher).

According to the Post report, from sundown Friday until sunset on Saturday, Steinmetz “does not ride in a car, bus, train or plane. He can only walk. For baseball tournaments, he will travel ahead of time and arrange hotels within walking distance of the fields. Sometimes, that can mean five-mile hikes the day he pitches. He will play during the Sabbath and on Jewish holidays.”

Not only is Steinmetz a clearly gifted athlete who works exceptionally hard to perfect his skills, but he is also no slouch when it comes to his academic studies. He graduated from the Hebrew Academy of the Five Towns and Rockaway with a 3.80 grade point average.  It was there that he also played baseball for his school’s team.

This past season, the Post reported that Steinmetz wanted to spread his wings and showcase himself against top competition. He traveled to Delray Beach, Florida to play for Elev8 Baseball Academy and 20-30 pro scouts watched his performances on the mound in every game he played in. His pitches kept improving in terms of velocity and he was throwing in the high 90s which is pretty dran impressive for a guy his age.

Besides Fordham, Steinmetz was approached by other schools but he honored his commitment to attending college at Fordham in the Bronx and by doing so, would also be closer to home.

While in Florida, Steinmetz would go shopping for Kosher, daven every day and observe the Sabbath by finding living accommodations close enough to the team’s field so he could walk there.

“It’s never been frustrating to me,” Steinmetz told the Post. “It’s just something I’ve always done. It makes me who I am. “It’s definitely made my life different, but in a good way.”

Steinmetz’s father, Elliot, told the Post of his son and his commitment to pursuing a career in baseball, “It seems to be something he has in his heart and something he enjoys is a part of him.” The elder Steinmetz is a real estate attorney and is also the men’s Division III basketball coach at New York’s Yeshiva University.

Jacob’s father added, “It’s part of the discipline and the commitment he has to baseball. A lot of that I think comes from his relationship with religion. The fact he’s able to interview the way he [does] or have poise the way he does or figure out things the way he does, a lot of it is because of his religious background.”