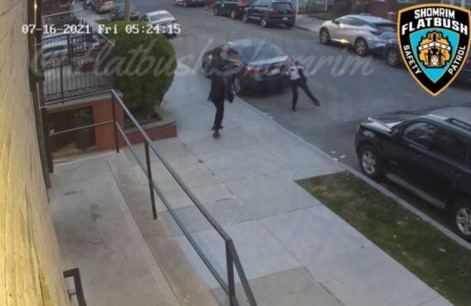 (VINnews) — One suspect has been arrested, and another suspect is still being sought, in the brutal beating and robbery of a Jewish man from Flatbush.

Levi Zupnik was walking to Shul on Friday July 16, when he was accosted and visciously pummled by two men, who made off with his Tallis and Tefilin. After making their escape, bloodstains were left on the sidewalk where the assault took place.

According to the NYPD, an 18-year-old suspect by the name of Alix Dure was taken into custody in connection with the incident. Dure is also a suspect in around nine other robberies. Police say he may be charged for these other incidents as well.

At this time, the suspect is not being charged with a hate crime for the July 16 incident, as he and his accomplice did not say anything to Zupnik during the assault.

After hearing that Dure was taken into custody, Zupnik said that he feels they should have caught him after making his first robbery.

“He’s a horrible guy. They should have caught him the first time,” Zupnik told Hamodia.

Zupnik called for Dure to be incarcerated so that he wouldn’t be able to commit such an act again.

In the meantime, Zupnik has recovered from his bruises sustained in the attack