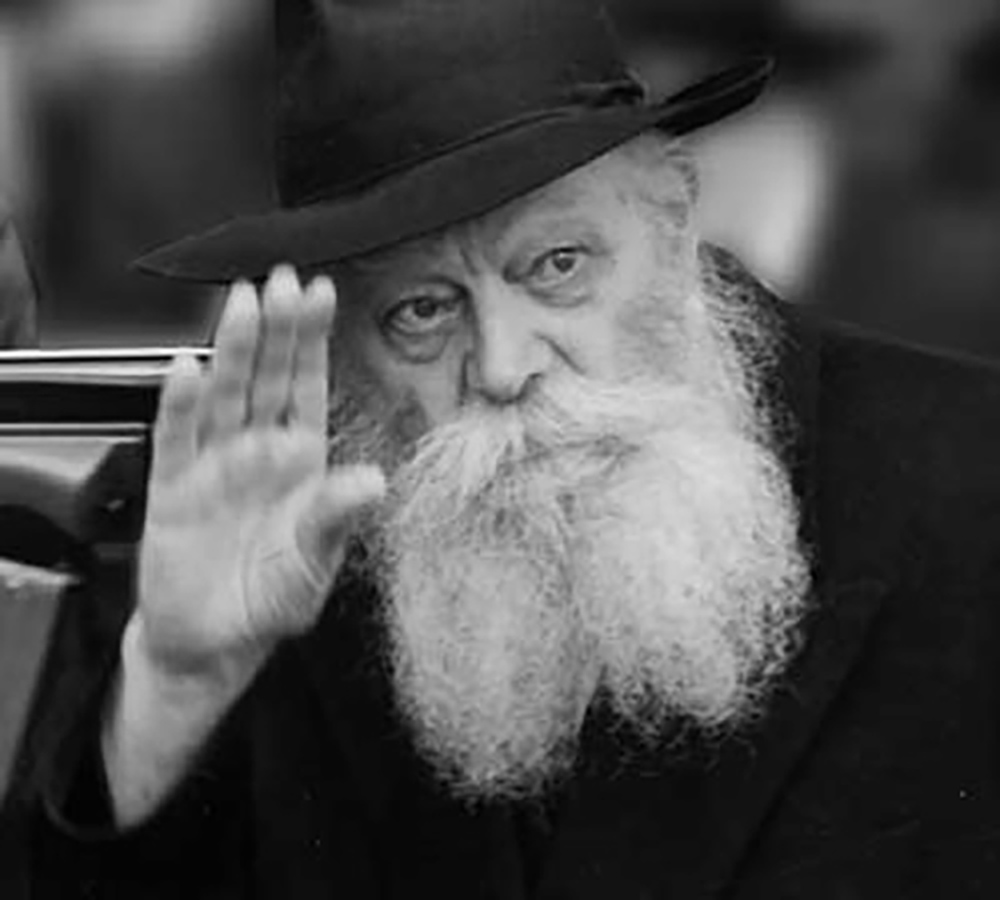 Across the globe, people from all walks of life are coming together this week and next to mark the 27th anniversary of the passing of the Rebbe, Rabbi Menachem M. Schneerson, of righteous memory, on the third day of the Jewish month of Tammuz (this year, Sunday, June 13, 2021). Unique to this year, the day will also mark another important event: It will be the day countless students conclude the 40th cycle of study of Maimonides’ Mishneh Torah, an effort that took approximately 11 months.

As is only befitting the confluence of two such important events, much preparation is underway to mark them accordingly.

The anniversary of passing, 3 Tammuz, is traditionally a day spent in reflection, learning, prayer, and above all, positive action. Jewish communities everywhere honor the Rebbe’s life and legacy with events that bring people together for farbrengens, to hear guest speakers from near and far, and to study the Rebbe’s teachings.

Reflecting on the Rebbe’s impact on his life now, nearly 27 years after his passing, David Marks of Mequon, Wisc., contrasts his current Jewish engagement with the “passive” and “dry … obligation” he felt he grew up with.

“For me, ” he says simply, “the Rebbe represents the ability to transform Judaism and the Torah into an active, lively, current and cerebral experience.”

The 3rd of Tammuz is a deeply personal day, a time to reflect on the Rebbe’s vision for the world and the individual’s role and responsibility in making that a reality.

One key observance of 3 Tammuz is writing a letterto be placed at the Ohel for the Rebbe’s guidance and intervention On High, in the age-old tradition of written prayer petitions at our holiest sites. Letters are written and delivered throughout the year, and the anniversary of the Rebbe’s passing is considered a particularly auspicious time to do so.

Over the years since the Rebbe’s passing, crowds have swelled on this day to numbers upwards of 50,000 people. Last year, of course, saw a dramatic decrease in visitors due to the pandemic, as travel restrictions and strict social- distancing guidelines kept crowds to a minimum. By no means did that stop the flow of beseeching, as in addition to personal visits, the Rebbe’s resting place annually receives more than 500,000 prayer requests sent online and via email, and virtually all of the visitors this week will be bringing petitions for blessings from friends and family around the world. 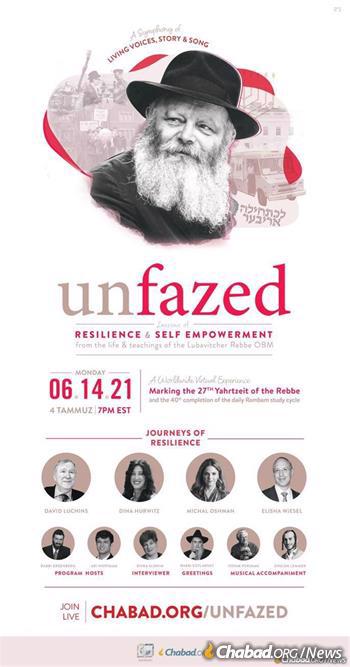 Unfazed: A Symphony of Living Voices, Story and Song, will illustrate lessons of resilience and self-empowerment from the life and teachings of the Rebbe.

As the global vaccination effort has dramatically changed the landscape of personal interaction for the better, this year many communities are offering in-person events, in contrast to last years’ commemorations, which were largely conducted virtually. To be sure, virtual options remain for those unable to join in-person events.

The in-person gathering paying tribute to the Rebbe in Mequon will be one of the community’s first since the onset of the pandemic, and promises to be an upbeat and inspiring one. To accommodate as many as possible, a link for those who wish to attend via Zoom is available as well.

St. Louis’ community-wide event virtually hosted noted author and lecturer Joseph Telushkin. Telushkin, the author of the 2014 New York Times bestseller Rebbe: The Life and Teachings of Menachem M. Schneerson, the Most Influential Rabbi in Modern History, among other works, spent five years working on his biography of the Rebbe, and tells the story of how the Rebbe went about optimistically and methodically implementing his vision for the world. Looking far beyond just Chabad’s network of emissaries, Telushkin describes the Rebbe’s positive influence on men and women, leaders and lay people from all walks of life, and his enormous canon of published teachings that continue to be published and mined for inspiration and guidance.

Telushkin, whose lecture was titled Lessons of Optimism and Positive Thinking From the Life Teachings of the Rebbe, was introduced by Michal Oshman, who heads of company culture, diversity & inclusion, and employer branding at TikTok Europe, and is the author of the best-selling What Would You Do If You Weren’t Afraid. 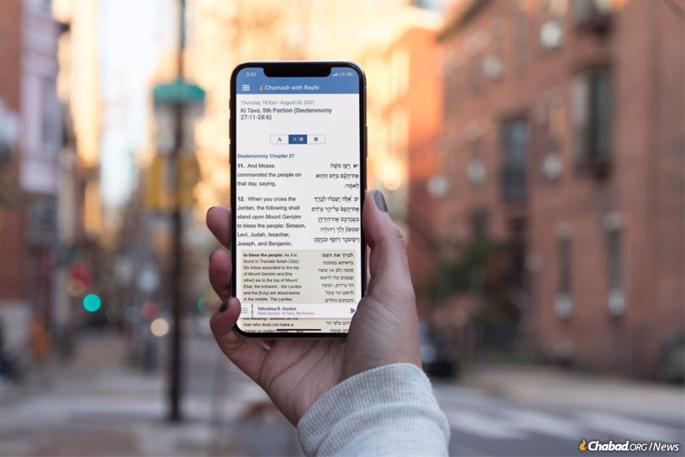 The newest revised and updated version of Chabad.org’s popular Daily Study app is being launched in time for 3 Tammuz, the anniversary of the Rebbe’s passing and the beginning of a new cycle of daily study of Maimonides‘ Mishneh Torah.

Virtual Efforts from the Team at Chabad.org

In addition to the in-person events, there is an abundance of online programming on Chabad.org. To mark 27 years since the Rebbe’s passing, the Chabad.org team has partnered with Merkos 302 to produce Unfazed: A Symphony of Living Voices, Story and Song, which will illustrate lessons of resilience and self-empowerment from the life and teachings of the Rebbe.

For those still at home due to Covid, the staff has updated How to Observe Gimmel Tammuz at Home, as well as What to Do on 3 Tammuz.

To help as many people get on board for the new Mishneh Torah-study cycle, the Chabad.org team has created an array of new features and tools, in addition to the ever-popular daily study page, which includes classes by Rabbi Yehoshua B. Gordon and others.

Of special interest is the newly revamped Daily Study App, which has been upgraded to include adjustable playback speed and the ability to subscribe to and save classes in advance, or from past days, for offline listening. Users can preload up to two weeks’ worth of classes, making it ideal for travel when data connections can be spotty.

New for this year, building on the growing collection of quizzes on the weekly parshah and just about everything Jewish, an ambitious project is underway to produce a quiz for every chapter of Mishneh Torah, being rolled out in time to be enjoyed by those following the one-chapter-a-day track. 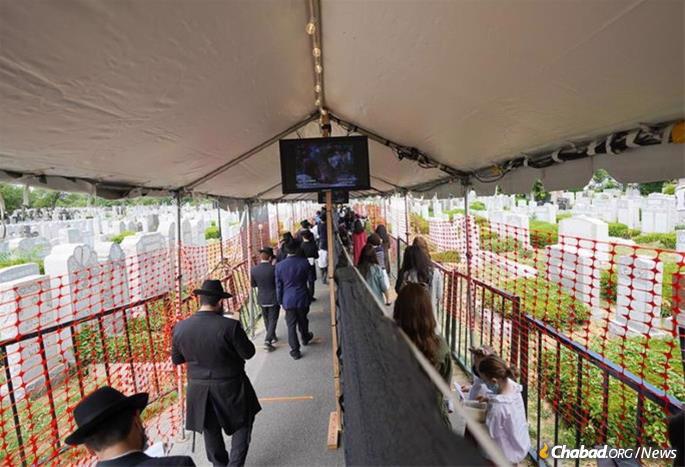 Men and women from around the world will be vising the Rebbe’s resting place during the week surrouding the anniverary of passing. (File photo: Bentzi Sasson)

In the 27 years since his passing, the Rebbe’s influence continues to grow—extending to an ever-increasing number of people from across the religious and political spectrum.

Arnold Milan of Pasadena, Calif., recalled watching news of the Rebbe’s passing in 1994 on television. He remembered questioning at the time how much longer the Rebbe’s ideas could survive without his physical presence.

“Turns out I was wrong … ,” Milan shared. “I’m here [at Chabad of Pasadena] every week, studying from the Rebbe’s teachings.”

The Rebbe’s message for humanity grows in strength because it is one the world thirsts to hear, an ethical call to reveal within the heart and mind of every man, woman and child not just a moral human being, but a reflection of G‑d Himself.

Rabbis call on Pelosi to remove Omar from key committee

Young US Jews more religious than seniors, but less attached to Israel

What’s behind the surge in Anti-Semitism? Fascinating Video with Jonathan Tobin of JNS News