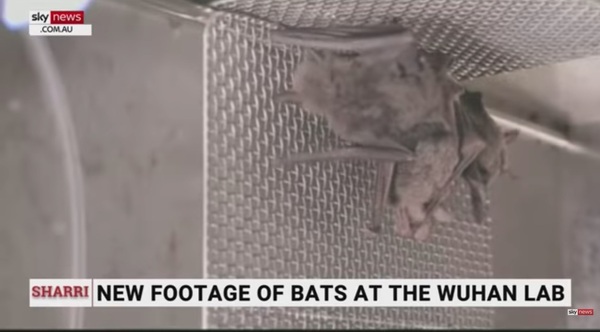 The cover-up of the probability that COVID-19 was deliberately created in the Wuhan Institute of Virology (WIV) has had profound consequences for the entire world, preventing early detection and countermeasures, as well as derailing informed research.

One key element of that cover-up was the hiding of the fact that the Wuhan lab was working on bats because the virus was a variant of an existing bat-borne virus.  The cover story, that a wet market led to the dispersal of COVID-19, would have looked awfully weak had it been known that the WIV was creating new viruses from bats.  Both the World Health Organization and Peter Daszak, who acted as an investigator for WHO, outright denied that the WIV had live bats in its research facility.

Australian journalist Sheri Markson has come into possession of stunning video from China uncovered by an underground research group that calls itself “Drastic” that shows live bats at the WIV and much, much more.  The newly uncovered video was produced by the Chinese Academy of Sciences in May 2017 commemorating the opening of WIV.

I have embedded Ms. Markson’s 16-minute video report for Sky News on the video discovery below, but for now, consider her tweet showing Daszak’s lie:

She describes her findings:

An official Chinese Academy of Sciences video to mark the launch of the new biosafety level 4 laboratory in May 2017 speaks about the security precautions that are in place if “an accident” occurs and reveals there had been “intense clashes” with the French Government during the construction of the laboratory. The video shows bats being held in a cage at the Wuhan Institute of Virology, along with vision of a scientist feeding a bat with a worm. The 10 minute video is titled “The construction and research team of Wuhan P4 laboratory of Wuhan Institute of Virology, Chinese Academy of Sciences” and features interviews with its leading scientists. The World Health Organisation report investigating the origin of the pandemic failed to mention that any bats had been kept at the Wuhan Institute of Virology and only its annex referred to animals being housed there.

She notes that Daszak has now changed his tune — from his earlier absolute denial:

In one tweet dated December, 2020 he said: “No BATS were sent to Wuhan lab for genetic analysis of viruses collected in the field. That’s now how this science works. We collect bat samples, send them to the lab. We RELEASE bats where we catch them!” In another tweet, dated December 11, 2020, he said: “This is a widely circulated conspiracy theory. This piece describes work I’m the lead on and labs I’ve collaborated with for 15 years. They DO NOT have live or dead bats in them. There is no evidence anywhere that this happened. It’s an error I hope will be corrected.” This month, Daszak appeared to retract his earlier denials and admitted the Wuhan Institute of Virology may have housed bats but admitted he had not asked them.

Her report for Sky News also mentions the highly suspicious deleting of the WIV archives from the internet on the grounds of “hacking” and that WHO investigators never even asked to see them.

I rarely recommend readers watch such a long video, but this is an exception:

Ms. Markson is way ahead of the rest of the world’s journalists on this story — a story whose importance dwarfs that of other news, because the world has been turned upside-down, millions have died, countless businesses have been closed and lives upended by a virus whose origins have been deliberately obscured by people with, as Markson notes, serious conflicts of interest (to put it mildly).

As COVID surges, why is YouTube suppressing SkyNews for its reports on HCQ and ivermectin?