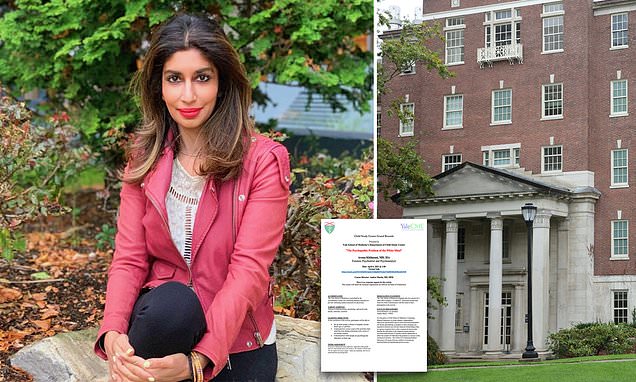 Seems like a New York City shrink with a predilection for fantasies about premeditated murder of white people is now taking immense heat on social media for her over-the-top comments. According to a New York Post report, a NYC based shrink named Dr. Aruna Khilanani had been badgering the Yale University Child Study Center to publicly release the controversial remarks that she made on April 6th.

In her address to the Ivy League school in New Haven. Connecticut, Khilanani expressed her long held fantasy of “unloading a revolver into the head of any white person that got in my way.” Dr. Khilanani, however, had no clue that her bellicose comments would generate intense condemnation and scrutiny in the world of cyberspace on the social media platforms

The New York Post reported that the April 6th lecture that Khilanani delivered at Yale was entitled “The Psychopathic Problem of the White Mind.” It not only included daydreams of gunning down white people but also dismissed the possibility that any of her targets could empathize with people of color or understand racism. The Post reported that she said that “addressing racism assumes that white people can see and process what we are talking about.”

“We keep forgetting that directly talking about race is a waste of our breath,” Khilanani stated in the incendiary speech, according to the NYP report. “We are asking a demented, violent predator who thinks that they are a saint or a superhero to accept responsibility. It ain’t gonna happen. They have five holes in their brain. It’s like banging your head against a brick wall,” she stated, as was reported by the Post.

The New Haven Register reported that the Yale School of Medicine released a statement Saturday that addressed “profanity” and “extreme hostility” in a non-affiliated guest speaker’s lecture titled “The Psychopathic Problem of the White Mind.”

Making such deadly threats in the public arena does have its consequences and Khilanani has now felt the brunt of her reprehensible remarks as she was targeted for criticism from Twitter to TikTok to health ratings websites, according to the NYP report.

In addition to the vehemently racist comments directed at ending the lives of white people in her preferred manner of gunning them down, Khilanani also claimed that she would experience absolutely no remorse or even the slightest bit of compunction about murdering someone based solely on the color of their skin. The Post reported that she said if such a shooting of a white person would actually take place she would leave “with a bounce in my step” and that white people “make my blood boil” and “are out of their minds and have been for a long time.”

On Friday, when her remarks were made public, her words were condemned by one Yale professor online. The Post reported Nicholas Christakis, a Yale professor of social and natural science and a physician said:  “The racism expressed by Dr. Aruna Khilanani … is deeply worrisome & counter-productive. Of course, as an invitee, she is free to speak on campus. But her views must be soundly rejected.”

The Post reported that the shrink was raked over the coals by such health websites including Healthgrades where consumers rate physicians on the experiences that they have had with them. Some gave here only one star reviews, while others took her to task for her anti-white sentiments in the comments section.

The Post reported that on another site known as RateMDs, Khilanani was called, “racist and an avowed future murderer,” and “Bigot, full stop.” “People who hate as much as her should not be allowed to practice,” another said. That comment represented one of multiple calls for Khilanani’s medical license to be revoked. That call was echoed on the TikTok platform, according to the Post, where one user said of Khilanani: “You sound as ignorant and racist as a white supremacist. You should lose your medical license.”

In order for a physician’s license to be revoked, an investigation conducted by the state’s Medical Conduct Program is required.

Khilanani was trained in psychiatry and psychology by NYU and Columbia University. She claims on her web site that her office is a “humble sanctuary for all kinds of people” yet her racist comments indicate otherwise.

The Post reported that her web site says: “Whoever you are, and wherever you come from, our world is better because of you.” She adds that: “Conservative, Liberal, Old, Young, Blue, Black, CIS, Trans, Asian, Fat, Skinny, rural, urban, B-baller, international, ex-pat, Rapper, Queer, White, Muslim, Biker, Rocker, Lax player, Atheist, Trump Supporter, Darwinist, Trump Hater. … All are welcome at the meet point.”

As one who actively participates on such social media platforms as TikTok and Twitter, the Post reported that subsequent to her remarks from Yale being released, Kgilanani went silent.