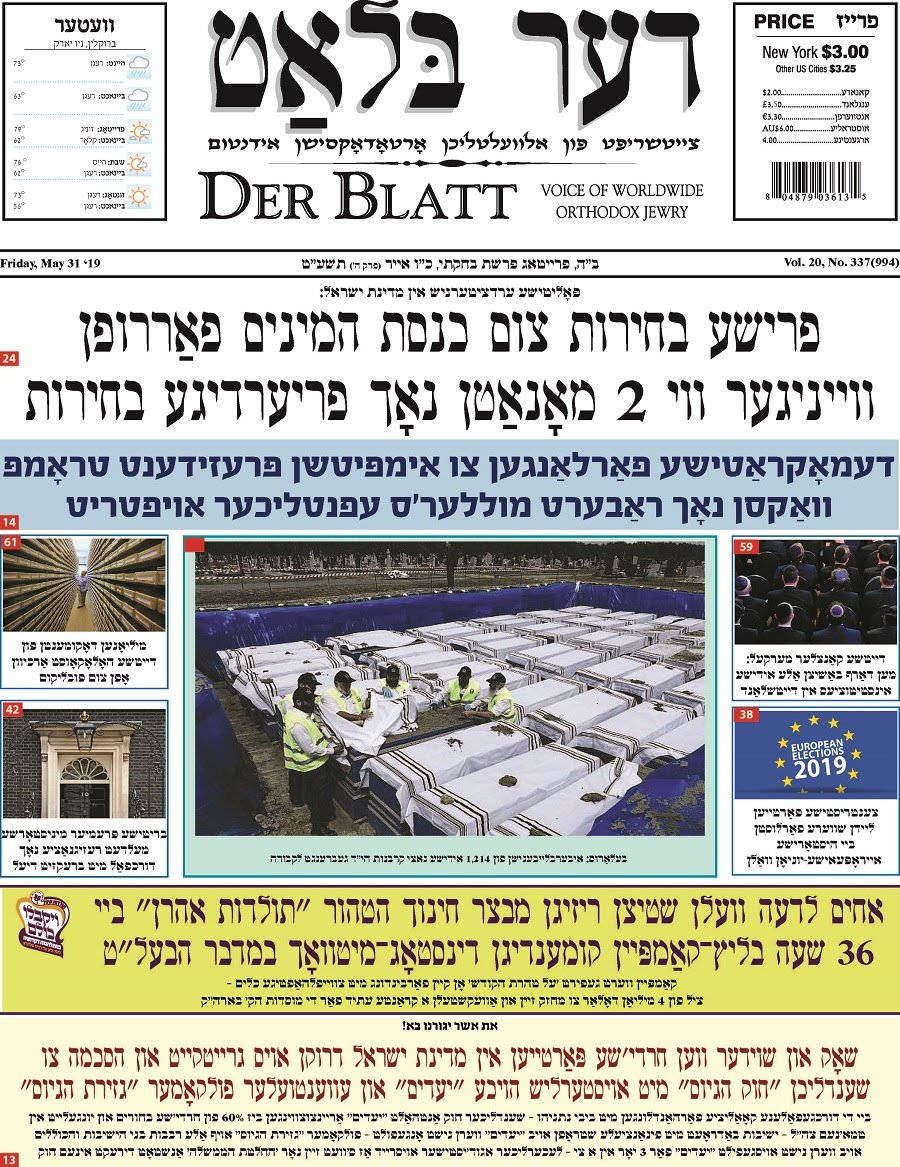 In this age of battling racism on all levels in the United States and around the world, it was reported that the City of New York is roiled over the fact that one of the ethnic and minority newspapers in which it pays to place public service ads has violated its rules and has expounded the most vulgar form of racism directed against black people.

According to a recent article in the New York Post, a Yiddish-language newspaper known as “Der Blatt” had published a column with heavy racist overtones. Der Blatt, which is based in  Monroe, New York, refers to itself as “the voice of worldwide Orthodox Jewry.”

The newspaper can be seen on newsstands in the Williamsburg and Borough Park sections of Brooklyn and it appeals to a faction of the Satmar Hasidic sect that calls Williamsburg and Monsey home.

Sources told the New York Post that the newspaper ran a column in its June 4th issue written by Rabbi Shmuel Teller which certainly raised eyebrows. The column focused on the political crisis in Israel, according to the Post report. Rabbi Teller drew a comparison of the situation in Israel to two Black men — one described as a “dirty person” — throwing a Jewish man out of his own home, sources said. The rabbi described one of the men with a derogatory term meaning “blackest of the black” that would be akin to using the N-word in English, sources told the Post.

When contacted by the Post for comment on the rabbi’s column and the impact that it had, Der Blatt did not respond.

Speaking to the Post without revealing his name, a member of the Brooklyn Hassidic community said that he was “appalled” by the racist focus of the column in Der Blatt.

“As a Hasidic father who tries to imbue my children with respect to everyone, writings like these destroy all my efforts,” he said.

The Post contacted Rabbi Teller’s home and spoke with a woman who identified herself as his wife but told the paper that her husband’s English was not proficient enough for him to offer a comment.

Also weighing in on this hot button issue was Naftuli Moster, the head of YAFFED, a nonprofit that advocates for improved secular education in yeshivas. He told the Post that the community’s education system “allows racism to perpetuate.”

“While inexcusable, the author is a product of a failing education system which does not teach anything about the history of slavery, racism, segregation or the Civil Rights movement in the United States,” Moster said.

Back in November of 2020, it was reported that Der Blatt told its readers that it had successfully kept the news about a planned wedding of a grandson of the Satmar Grand Rabbi Aron Teitelbaum a complete secret, according to the Post report. At the time, all large public gatherings were strictly prohibited by the city because of the rapid spread of the deadly coronavirus. Despite the Covid-19 restrictions that were in place, thousands of people gathered in a wedding hall in Williamsburg for the wedding; somehow evading the authorities.

While the city has not divulged how much money they spent to advertise in Der Blatt, a spokeswoman for Mayor DeBlasio did say that they would cease advertising in that publication in the future.

“We have zero tolerance for racism. Period. This column betrays the values of our city and as a result we will no longer advertise in the newspaper,” Avery Cohen said.