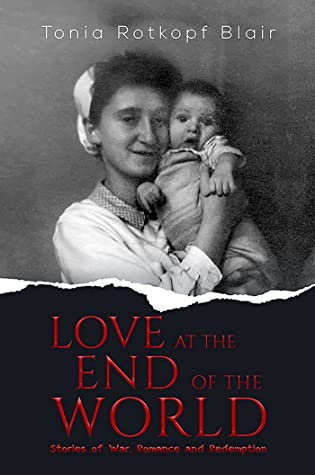 We need all the stories. We need the details. Even then, we will never know it all, comprehend it all

And so, the Polish government no longer wishes to be held responsible for German Nazi crimes committed on occupied Polish soil. In 2018, Polish President Andrzej Duda signed legislation that threatened up to three years imprisonment for anyone who “publicly and untruthfully assigns responsibility or co-responsibility to the Polish Nation or the Polish State for Nazi crimes.”

The Polish parliament has approved passage of a draft bill that is likely to severely limit the ability of Polish Jews and their descendants from reclaiming property lost during the Holocaust.

And yet, historical accounts of Polish-on-Jewish atrocities abound, both before and after the Holocaust. In addition, there are personal accounts, in books and on film, which recount details. These personal memoirs are detailed, chilling, haunting, and trustworthy.

Last month, Tonia Rotkopf Blair’s son sent me a letter together with the book written by his mother, a woman who survived the Lodz ghetto as well as the most notorious of death camps. When people later asked her where she went to High School or College she sometimes answered: “Auschwitz,”—which may have shut the conversation down.

Blair, (her married name), wrote her Memoir, Love at the End of the World: Stories of War, Romance, and Redemption, much later in life, and it has literally just been published. However, it is an invaluable contribution to our understanding of the Holocaust and of trauma in general. There are galleries of family photographs (how in God’s name did she find and keep them?). Her sons, Doniphan and Nicholas, both wrote Afterwords as did Tonia’s writing teacher. Tonia’s entire family accompanied her back to Poland where they made a movie of their visit: Our Holocaust Vacation.

Tonia weaves back and forth in time, as if in a dream, a nightmare perhaps, in a series of brief chapters, plainly but deftly written, each with a hidden sucker-punch to the reader’s gut. Tonia introduces us to her beloved Polish family, and shows us how Poles—not the German Nazis, the indigenous, Catholic, Poles—behaved with gratuitous cruelty towards their Jewish neighbors.

Some Poles? Not all Poles? Surely not most Poles? Well, even the righteous Christians were only able to rescue a precious handful of Jews. Many more hid their Jewish neighbors but only for money, then turned them in when their money ran out.

We need these stories. We need the details. Even then, we will never know it all.

1939, Lodz. The secular, socialist Rotkopf family is starving. Jews were forbidden to work or go to school, were not allowed to buy bread, walk on the sidewalk (just as in Muslim countries), and had to wear yellow stars (distinctive clothing, as in Muslim countries). Jews also even had to surrender their pets—whom they never saw again.

Their provisions were nearly gone. The Rotkopf family is starving. Tonia’s eleven-year-old brother, Salek, decided to rescue them all by selling cigarettes. Soon, he returns with “blood streaming down his face from gashes on his forehead…he had been beaten up by three Polish boys, probably not much older than him, calling him ‘You dirty Jew,’ smashing the box and stool and stealing the cigarettes and change.”

When Tonia, with her long blonde braids, wearing a large cross and dressed as a Polish girl, tries to “pass” in order to buy bread—a Polish boy, ordered to point out any Jews in the line, “stopped in front of (her). Then he pointed…the German soldier pulled me out of the line, cursing. With a kick, he shoved me down the street.”

In their thick, shiny, new leather boots, the Nazis loved to kick—and to kick hard.

Tonia’s very glamorous aunt Kreindel, who wore lipstick and high heels, perfume and fox furs, is “thrown out of a window” by the Nazis.

Chapter after chapter, Tonia introduces us to her father, her mother, two siblings, only to tell us that she last saw her entire family when they were being led away, and when she tried to join them, a “local German neighbor kicked her in the stomach.” To this day, she does not know whether he was trying to help or hurt her.

True, a Christian woman neighbor once lent the 14-year-old Tonia the cross to wear to buy the bread and Christian neighbors once helped “wash the blood out of her hair.” Important, very Christian behavior, but does it constitute a resistance movement?

As to whether Poles were kind to their Jews pre-Holocaust, consider this: Tonia’s son Nicholas, whose father, Vachel, is Christian, writes: “It was painful for Mom as Christian holidays in Lodz were a fearful time. Jews did not leave their houses because, as she often repeated, on those days it was “an especially good deed to stab a Jew.”

Tonia takes us with her on her journey to Hell, in the cattle car on its way to Auschwitz where, together with 24 year-old Stefan, she spends all night in utter darkness, reciting poetry and singing Chopin. They had worked together in the hospital in the Lodz ghetto. Once the Nazis separated the men from the women, she never saw Stefan again.

The Nazis kicked people hard, cursed them, constantly counted their Jewish captives at twice daily roll calls, had prisoners sleep naked in the mud, in freezing weather or eventually on bunks with splinters, then bedbugs, without blankets. No one was allowed to go to the outhouse alone, everyone was watched. Tonia writes: “I cannot flush a toilet to this day without thinking of it.”

She reminds us: “You could never rest. You were cold, you were hungry, you were starved.” And yet, she did not talk about any of this for a very long time because “I feel pained to tell people about the inhumanity of man to man.”

When Tonia returned to Lodz, a man said: “I thought they killed all the Jews.” And, when she returned to her family’s one room apartment in Lodz, she was cursed as a “whore” by the woman who was now living there. Tonia fled.

Although Tonia remained a socialist, she knew that the Russians were also anti-Semites. She decided to seek shelter in the American sector.

Even the luckiest, the hardiest, the most loving of survivors are marked for life by such trauma. Tonia is forever after anxious, insomniac, fearful; she waits to be told what to do; she asks men to protect her, she actually feels “safe” with her Nazi Master because he was not brutal towards her.

Although she travels to South America and to the United States, Tonia remains overly obedient to authority, as if she is “hypnotized” by it. But, she is always a bit physically reckless (on skates, on skis, on icy pavements), but she’s unstoppable. Like so many survivors, she is always a bit out of place, dressed “differently,” always in a pleading position.

I will let Tonia have the last word: “Now that freedom is here, the mind is enslaved by the past, by nightmares, by terrible agonies, miseries, pain, loneliness, ugliness. And above all, the excruciating memories and guilt that pop up when someone pays a compliment.”

Thank you Tonia for sharing some of these painful but important details with us. (INN)

Prof. Phyllis Chesler is a Senior Fellow at the Investigative Project on Terrorism, received the 2013 National Jewish Book Award, authored 20 books, including “Women and Madness” (1972) and “The New Anti-Semitism” (2003, 2014) and four studies about honor killing. Her latest books are “An American Bride in Kabul,” “A Family Conspiracy: Honor Killing,” “A Politically Incorrect Feminist,” and “Requiem for a Female Serial Killer.” She is also a Fellow at the Middle East Forum (MEF) and at the Institute for the Study of Global Antisemitism and Policy (ISGAP), and a founding member of Scholars for Peace in the Middle East (SPME).

A Candid Conversation with an Etrog Dealer