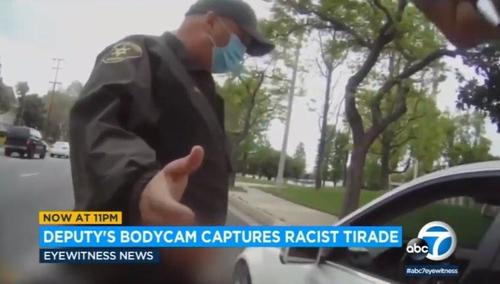 (TJVNEWS.COM) Popular writer Jonathan Turley pointed out a viral video in which an officer pulls over a self-described teacher for using her cellphone while driving and is met with a barrage of racist slurs.

The officer was only able to show his side in the encounter because he paid for his own camera, Turley pointed out.

Turley makes a valid point of how vital the police body cams are, they not only help in holding police accountable for poor behavior but also protect the officers themselves and show both sides of controversial police encounters.

Turley writes ” Despite the obvious value of such cameras, jurisdictions like Los Angeles County have resisted and still do not have this basic protection for both officers and citizens alike. Likewise, prosecutors in cities like Chicago long opposed the filming of officers by citizens”

“Yes, I started to record because you’re a murderer,” she says.

“You’re threatening to kill me and my son,” she says at one point in the encounter.

…and then it escalated as the woman is heard telling the deputy,

“You’re always going to be a Mexican. You’ll never be white, you know that, right?”

“You’ll never be white, which is what you really want to be,” she says after signing a citation. “You want to be white.”

Police say the woman is well known for bringing baseless charges against officers.

Below is the viral video: