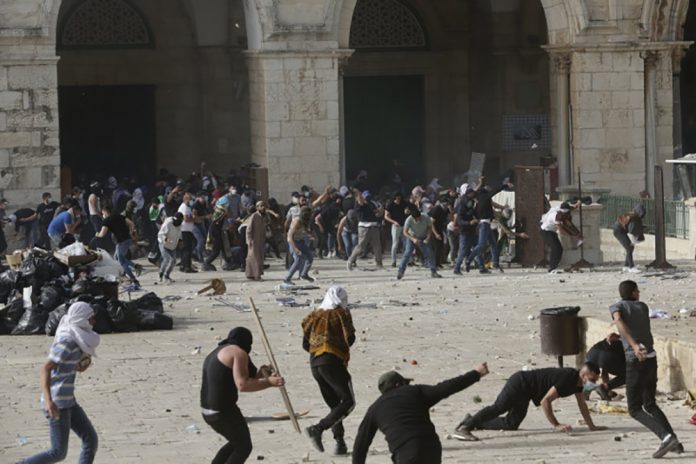 Patrick Kingsley is a 32-year-old British-born journalist, educated at Eton and Cambridge in English Literature. He formerly worked for The Guardian before he became the New York Times’s bureau chief in Istanbul in 2017. He is now their bureau chief in Jerusalem, having replaced David Halbfinger.

In an earlier era, he might have been Lawrence of Arabia, in full Arab headgear and on a camel. Today, our young Lawrence is a soulful young man with sweetly tousled hair, wearing a sweater and a shirt, no tie. Cool, understated, ready to cover battlefield conditions.

Just in the last four days, Kingsley has written more than 3,000 words about Israel, most of them biased, misinformed, and as highly incendiary as the kites and rockets that Hamas has been launching into southern Israel for some time.

The headlines that accompany Kingsley’s articles, often co-authored by Isabel Kershner (and perhaps written by someone else), invariably position Israel as the aggressor and Palestinian “protesters” either as the victims or as the reactors. For example: “Israel Hits Gaza with Airstrikes as Hamas Increases Rocket Fire” and “Evictions in Jerusalem Become Focus of Israeli-Palestinian Conflict.”

Always unclear, purposely so, is what came first. Was it the more than 200 rockets fired into southern Israel or was it the first-to-be-named but Israeli response—the airstrikes? Do Kingsley and Kershner simply fail to understand that the alleged “evictions” in Sheikh Jarrah/Shimon Ha-Tzadik are legal, under both Israeli and international law—and that this is a question of “provocative” squatters refusing to pay rent to a legal landlord? Or obey the court decision to vacate?

Or, are they malevolent, if not biased?

This is how Kingsley and Kershner describe Israeli Jews—seven times in this article. I suppose this is an improvement from the 15 times they described Jews in this way in their previous May 7, article.

However, they do not describe any Hamas or Palestinian Authority spokesmen as “right-wing,” “violent,” “provocative,” “stone throwing,” “potential lynchers,” “Islamists,” or as “fascists.”

In fact, the article misdescribes a video in which an Israeli driver is seen as “swerving” into a Palestinian.” Kingsley’s inference is that this was done on purpose. Guess what? This was an accident, caused by a group of Palestinians throwing rocks and stones at the driver—who, when he exited, they tried to lynch. The driver was saved by an Israeli police officer who killed no one.

Kingsley and Kershner describe J Street as a “liberal advocacy group,” which has called upon the Biden Administration to admonish the Israelis in the matter of evicting and displacing Palestinian families in East Jerusalem. They also manage to find a former Israeli general, Giora Eiland to quote; Eiland blames the Israelis for not being “careful enough,” and for “tactical failures (in) handling the tension in the city in recent days.”

Kingsley et al do not quote any dissident Palestinians. Au contraire. They quote Palestinians who describe Israel as engaged in “ethnic cleansing,” and as perpetrators of “planned expulsions,” etc. Based on Richard Landes’s, Pierre Rehov’s, and Nidra Poller’s work on Pallywood, I somehow do not believe the Palestinian videos of wounded children and dead family members. I could be wrong in this instance but somehow I doubt it.

Whether the NYT’s reporters have been misled; whether they are afraid to lose their access to Palestinian sources if they report the truth; whether they’ve been indoctrinated long ago which is why they hold these positions, is unknown to me. Whichever it is, their formula of disinformation works. Both articles are the lead stories. Today also continues for almost a full page (A10) in the hard copy, accompanied by four photographs.

Israel is always, always, the aggressor, Palestinians are always the victims. In my view, this much propaganda, day after day, month after month, year after year, constitutes incitement to genocide.

This kind of daily anti-Israel propaganda constitutes another kind of “cancel culture” bee swarm, gathering force and speed as it continues and expands the echo chamber in which it thrives.

Prof. Phyllis Chesler is a Fellow at the Investigative Project on Terrorism and Ginsburg-Ingerman Fellow at the Middle East Forum, received the 2013 National Jewish Book Award,.authored 20 books, including Women and Madness and The New Anti-Semitism, and 4 studies about honor killing, Her latest books are An American Bride in Kabul, A Family Conspiracy: Honor Killing and A Politically Incorrect Feminist.