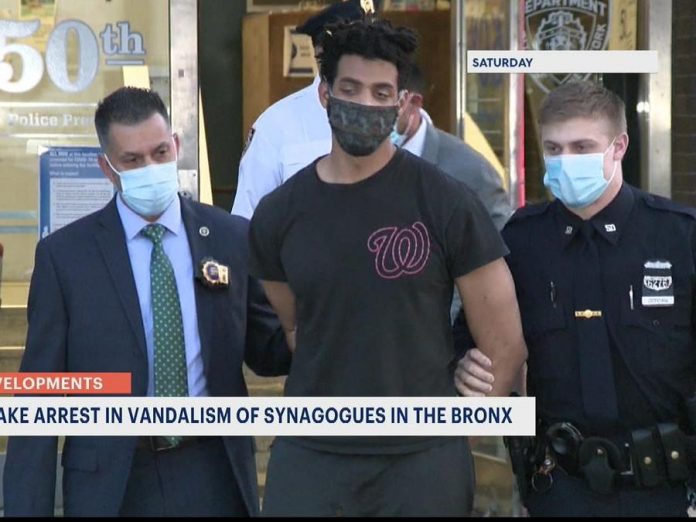 A suspect was arrested recently following several vandalism incidents at synagogues located in the Bronx area of New York City.

Police officers were on patrol around 3 a.m. Saturday near the intersection of Delafield Avenue and West 246th Street in Riverdale when they say they saw him riding a bike against traffic. They stopped him and tried to write him a ticket, but police say Brunette became uncooperative and refused to provide proper identification. He was taken into custody and brought him to a precinct for further questioning because he fit the description of the suspect in the string of vandalism.

Police returned to the location to canvass the area and found a van with a broken windshield.

“Police say video from a nearby security camera captured Brunette throwing a rock at the van. They say the video also showed him leaving the parking lot of the nearby Conservative Synagogue Adath Israel of Riverdale,” the ABC report read. The officers also discovered books thrown about in the synagogue and a shed that was broken open. A groundskeeper said the bike the suspect was riding was taken from inside the shed.

“Brunette is accused of throwing rocks at the windows of four synagogues,” the outlet stated, adding police did not give a motive.

NYPD Hate Crimes shared surveillance footage April 25 of the suspect pulling an object out of his coat pocket and throwing it at the front of a building:

“This has been going on for a few days. This was a department-wide effort,” John Miller, NYPD Deputy Commissioner of Intelligence and Counterterrorism explained. “Hopefully life will resume back to normal and people will be able to worship without fear.”